A while back, Larry Crane – Tape Op's editor – tweeted an observation implying that many producers, engineers, and artists fill up their productions with tons of tracks simply because the modern DAW allows for such. He and I went back and forth a bit about having started out recording on linear tape formats, and how that taught us how to pick and choose during the tracking phase what any music production really needs. 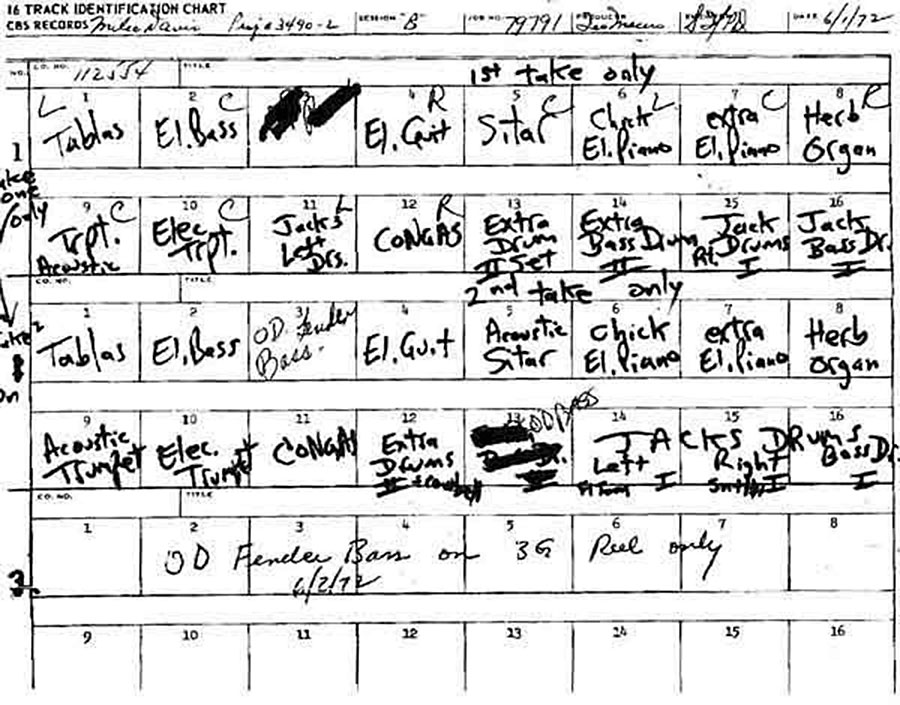 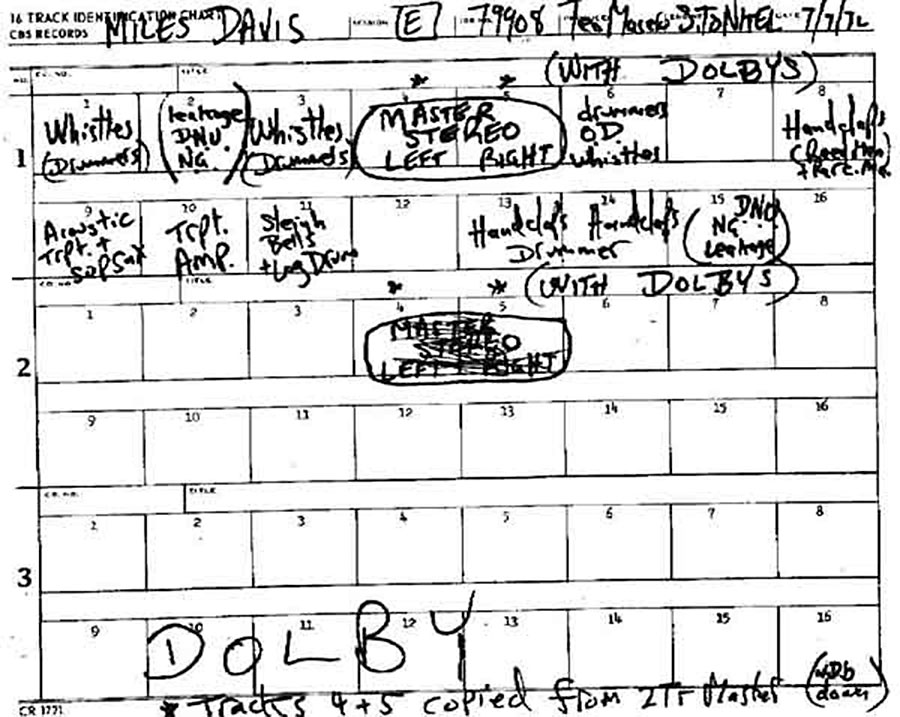 Track sheets for the initial Miles Davis's on the Corner studio sessions on June 1, 1972 and an overdub session on July 7, 1972.
Courtesy of Paul Tingen miles-beyond.com

I started my career in a room with two Alesis ADAT 8-track tape-based digital recorders (sync'd for 16 tracks, total) and a 24-channel Mackie 8-bus console. Working in that format taught me about planning ahead, as well as making sure the parts recorded were essential to the production. We didn't have any extra tracks to "record it and see if we want it during the mix." That just wasn't a possibility. For instance, if I wanted to comp vocals I needed to do that early in the project, because each saved take required its own track. Plus I'd need an open track to record the new vocal comp onto after making the decisions of which parts of each take would be the final version. After I made this comp, I had to listen several times to make sure that the artist and I were happy, because those tracks I used for the multiple takes were soon needed for other overdubs.

We eventually added a third ADAT for 24 audio tracks, and for me that was like heaven. I could expand on ideas more freely at times, but still needed to think in a finite way. We upgraded the console, and I eventually bought my first 24-track analog machine. One of the techniques I would use in that 24-track situation was committing multiple mics to one track. I like using two mics on guitar amps during tracking, but I'd create my blend before the recorder by using the mixing console's bus groups. When tracking multiple songs I might change that blend for each song, but I was always committing the sound to one track of tape. When it came to drum recording, I would not generally use a hi-hat mic; but if the drummer played the hats lightly, and I felt the need for a mic, I would blend it via the console's bus with the stereo overheads. I know many people who, to this day, only use two tracks for toms on drummers with multiple tom setups. When I used an inside and outside kick drum mic, they always were sub-mixed to one track.

In the overdub phase, we needed to make decisions and stick with them. Oftentimes a room mic on a guitar solo, backing vocals, or horn parts can sound really great. I'd make that blend in the moment and commit to one track, because we didn't have the track space to put that room mic on its own track. We'd have to decide if keyboard parts needed to be in stereo, and to understand what that might mean down the road in the mix. If a song really needed some percussion, but tracks were disappearing fast in overdubs, I would punch different sections and instruments on the same track, or have several players for each of the different percussion instruments all recorded together. If we wanted doubled parts, the decision needed to be made whether to keep them on separate tracks for panning, or (if there were open tracks) to play one, and then bounce the recorded version with the next performance onto a new track, giving us two parts on one physical track. Decisions needed to be made constantly. "Is this part working? Is it enhancing the song and the production aesthetic?" If something wasn't, it was often erased for a part that was more essential. The record began to take shape in the recording process when we had finite tracks. The producer, artist, and engineer all had a better idea of the shape of the record at the end of each session.

After all those years on 24-track formats (even my first digital system after I opened Oxide Lounge Recording was a iZ Technology RADAR 24-track digital machine), I still think like I'm working on tape. I still ask the question, "Do we need this, or are we just goofing off?" This weekend I was recording a guitar solo, and the iso booth and hall doors were open. The vocal mic was picking up the guitar from there, so I bussed it to the track I was using for the close guitar mic. It now has a cool sound built in. I make many records that would fit onto 16- or 24-track formats, even though I've (finally) started using Pro Tools. As a matter of fact, I decided to use Pro Tools Native, at a high resolution, and it maxes out at 48-tracks. In over five years on this system, I've maxed it out one time. I know of one well-known Nashville producer who even sets his Pro Tools rig for destructive record – there is no "undo." He also tries to convince bands that going over 24 tracks is a violation of the Musician's Union, and if they want to add more tracks they must pay a fine. They need to consider if that extra part or idea is really essential and necessary.

So, my fellow recordists, I encourage you to "think like tape." Only add what your production needs. Don't constantly throw everything possible into the machine and hope to sort it out later. Now is the time to commit!