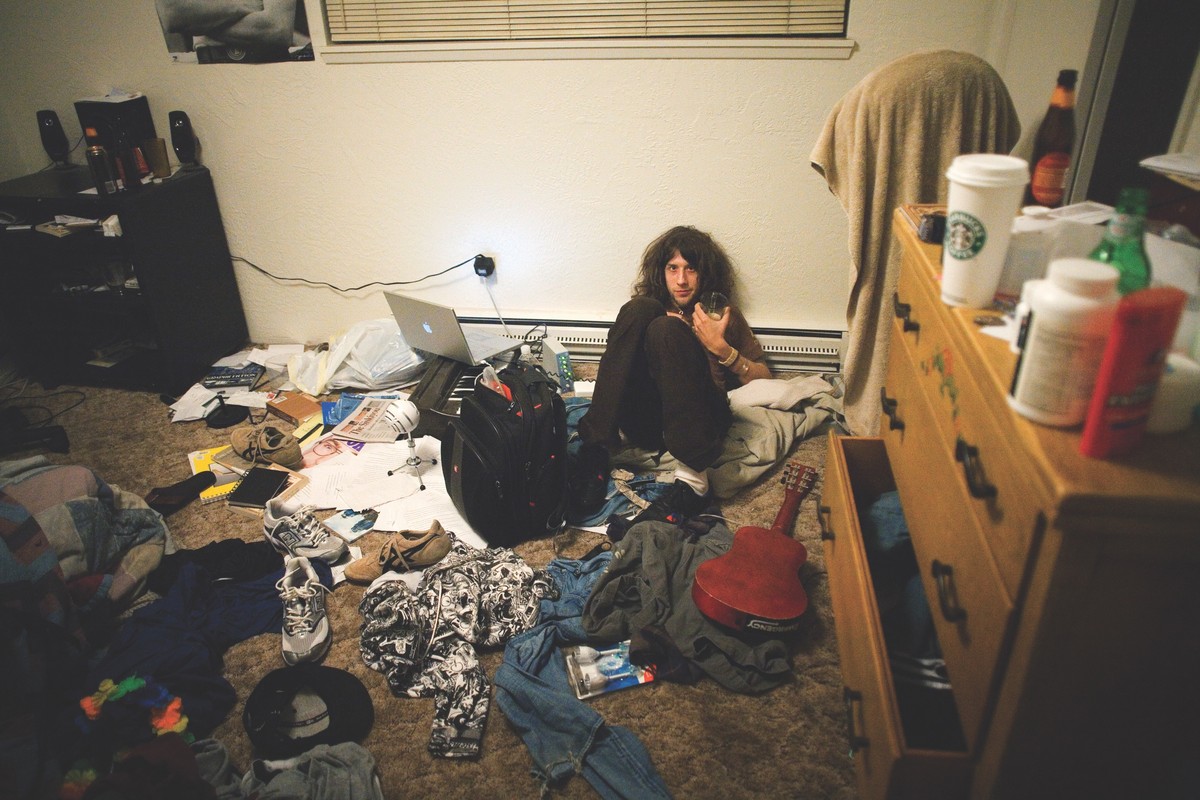 David Strackany, a.k.a. Paleo, is a wandering musician/poet currently calling Brooklyn his home. However over the last couple of years you'd be more likely to find him across the US traveling across 45 states and performing his music in bars, coffee shops and home concerts, all while also recording one song per day. Starting in April 2006 and lasting an entire year, he recorded what is almost certainly the longest album ever. The Song Diary consists of 365 songs, recorded one a day, day after day and no matter what. All this while simultaneously taking the show on the road! It was an impressive feat and I had to learn more.

How did you get your start in making music and recording?

My musical life began when my older brother abandoned his drum set in favor of a guitar and I discovered a few of its impoverished pieces in a closet. I was in seventh grade, and I set an old rack tom to the left and a snare drum to the right — on a couch — and took two sticks and went at it. I slowly added more drums to the picture, never really knowing or caring exactly how one was supposed to go about playing the drums. By eighth grade I was captured by bass and guitar in much the same way. In ninth grade I discovered a 4-track tape recorder. With that I was pretty much done for.

What was the impetus for undertaking such a huge endeavor with The Song Diary?

I didn't have a whole lot on my mind other than I knew it was a compelling idea, and knowing this I felt obliged to go through with it. I wrote the first song the day the idea came to me. I just jumped in headfirst and decided I'd worry about details like the reason "why" later.

What about details like "how"? You didn't only do this project from your home. You took it on the road.

I decided right away that the project was going to have to hit the road if it were going to survive. I decided that more so than time, space and gear; the writing of a good song every day would require inspiration. So I hit the road hard that year, playing 215 shows in 152 cities and 45 states. All told, a journey over 52 thousand miles long. Being on the road created a host of new obstacles. On more days than I can count, simply finding a quiet place to think was harder than you can imagine. I didn't have a bedroom, no door I could close behind me. And that's just for the writing of the song. The recording of the song was no picnic either.

What did your mobile recording rig consist of?

My setup was humble. My laptop and a mic. I used [Apple's] GarageBand, and the mic was a Blue Snowball [USB-powered]. But finding a space was often impossible. Sometimes I'd have to retreat to bathrooms, just to get away from music blasting or people talking — to be able to commit my song to tape. Maybe time would get the better of me, and it'd be three or four in the morning before I'd finish writing the song, and I'd be at some stranger's house. I'd have to sing the song as quietly as I possibly could into that microphone, or risk waking up my gracious host who's sleeping in the next room. A lot of the songs are sung in whispers like that, but that's not an aesthetic decision you're listening to, it's a logistical necessity.

Tell us a story about one of the crazier nights you had on the road trying to record a song...

I get that one a lot. But the thing is, my car never got stolen. Never got held up at gunpoint and asked to surrender my pen and guitar. Never found myself suddenly surrounded by girls gone wild. Things happened, but they were the little things that mattered. The ambulances that would drive by outside as I was singing. The foghorns that would blow. The simple sentiments a stranger would say in passing that seemed to carry in their heart the whole world and all its histories. I really started to think of the project as poetry more and more, and it's the little things that have to rock a poet's world. If you're waiting on the big things, you're going to run dry fast. Little moments of chance and fate — that's the spark.

Going through your website, one thing that immediately jumps out about The Song Diary is the recurrence of the song "Sunday Prayer".