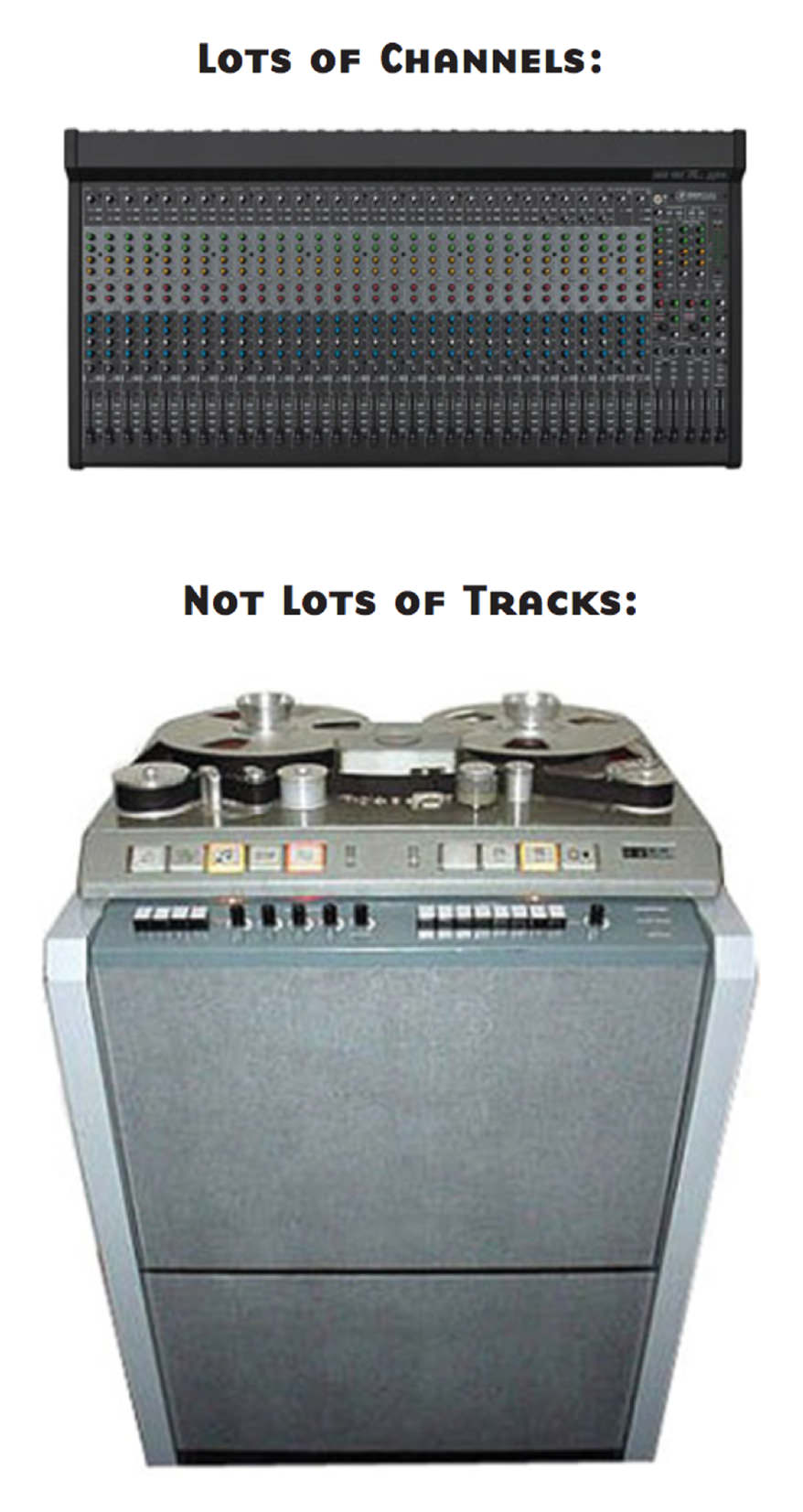 The art of recording music is one that seems to fascinate everyone. For folks that never have set foot into a recording studio, the concept of being there at the moment of inspiration, as well as capturing the songs and sounds that resonate in our lives, must look pretty magical indeed. It would appear that the recordist gets to be the lucky, rare audience to pure, emotional performances and moments of brilliance. But when the art of recording is discussed by anyone not intimately familiar with the process, many times the information is jumbled. Words and workflow are mixed up and misconstrued. If you're a regular reader of Tape Op, I'd hazard a bet that you already have a clear knowledge of everything I'm saying here already, so pass a copy along to your friends so they can gain a better understanding of the craft and work that we all are involved in!

1. Tracks and Channels are two different things. In this usage, a Track is a single linear recording of mono audio signal. A Channel is the route which audio (as an electrical signal) passes through a console or outboard device on the way to and from the recording unit. You can't add more Channels and have more Tracks to work with while overdubbing or mixing. Recently, in the liner notes of a CD reissue, I read about how more Channels were added to a studio, and thus more overdubs could be done. Not true. Which leads us to...

2. The amount of Tracks on a recording device doesn't limit how many different instruments can be recorded to it. That's right, if your console has a bunch of Channels, then you can mix as many mics as you can plug into the console down to one track, or maybe two, or three. You can record several instruments on a single mic. If more than one Track is being recorded, submixes can be routed to a Bus (no, not spelled "Buss"), or multiple Buses, in order to create different groups of instruments or vocals. Therefore, one Track could contain several musicians' contemporaneous performances.

3. Most songs don't get recorded in a single take. Sure, with some music, like live jazz or Phil Spector productions, this magical event occurs. But, in many cases, it's multiple live takes edited together to keep the best parts, or a basic track that is overdubbed onto. In both these scenarios there is no one moment of recording where we hear all the elements of the finished song go down in a solitary pass. In fact, in many recording sessions we never hear everything together until mixing commences. So remember this next time you see a movie scene where the crew in the control room watches, mouths agape, as the hit song gets tracked (you know, the one that changes careers overnight). It likely didn't happen that way!

4. "That record took four years to complete." Uh, yeah, right. I doubt it. Even Guns N' Roses' Chinese Democracy couldn't possibly be the product of 40 hour weeks, every week, for 10 years (That's over 20,800 hours). That's right, albums that aren't knocked out in several days or weeks are usually worked on in segments, with sessions booked for various parts of the process. Pink Floyd's The Wall was completed in 11 months of fairly continuous work, but even that included a few breaks. I remember when the Eagles released The Long Run and the ads proclaimed, "Three Years in the Making," as if they'd never had to tour their asses off for Hotel California during some of that time.

5. Mixing and Mastering are two different processes. How many times have I been reading an article, memoir, or biography where the writer refers to the Mixing process as Mastering? Too many times. Please stop doing this. Mixing refers to balancing the levels of a multitrack session down to a mono, stereo, or multichannel mix. In general terms, Mastering is the process of assembling the final mixes (the result of the Mixing process) and creating a master for mass production of CDs, vinyl, MP3, or whatever format is being utilized. If you wish to be really correct, digital assembly of an album for CD or vinyl is actually pre-mastering, and the creation of a physical CD master, or cutting vinyl, is Mastering. But I don't even expect professionals to get this correct, as we seem to interchange Mastering for pre-mastering all the time.

6. Producer or Engineer? So many times I've read articles and seen websites where these titles are randomly assigned when talking about a specific project. Read the liner notes! People constantly, and erroneously, credit Brian Eno [Tape Op #85] with producing David Bowie's Low. Although he had a great influence on the sounds and compositions, the actual Producer credit belong to Tony Visconti [#29] and Bowie himself. I've seen this in the reverse as well, with a Producer getting referred to as the Engineer — a case that's certainly not always true.

These are just some of the misconceptions that people often seem to be confused about. Maybe this is one small step towards clarifying our craft? We shall see...