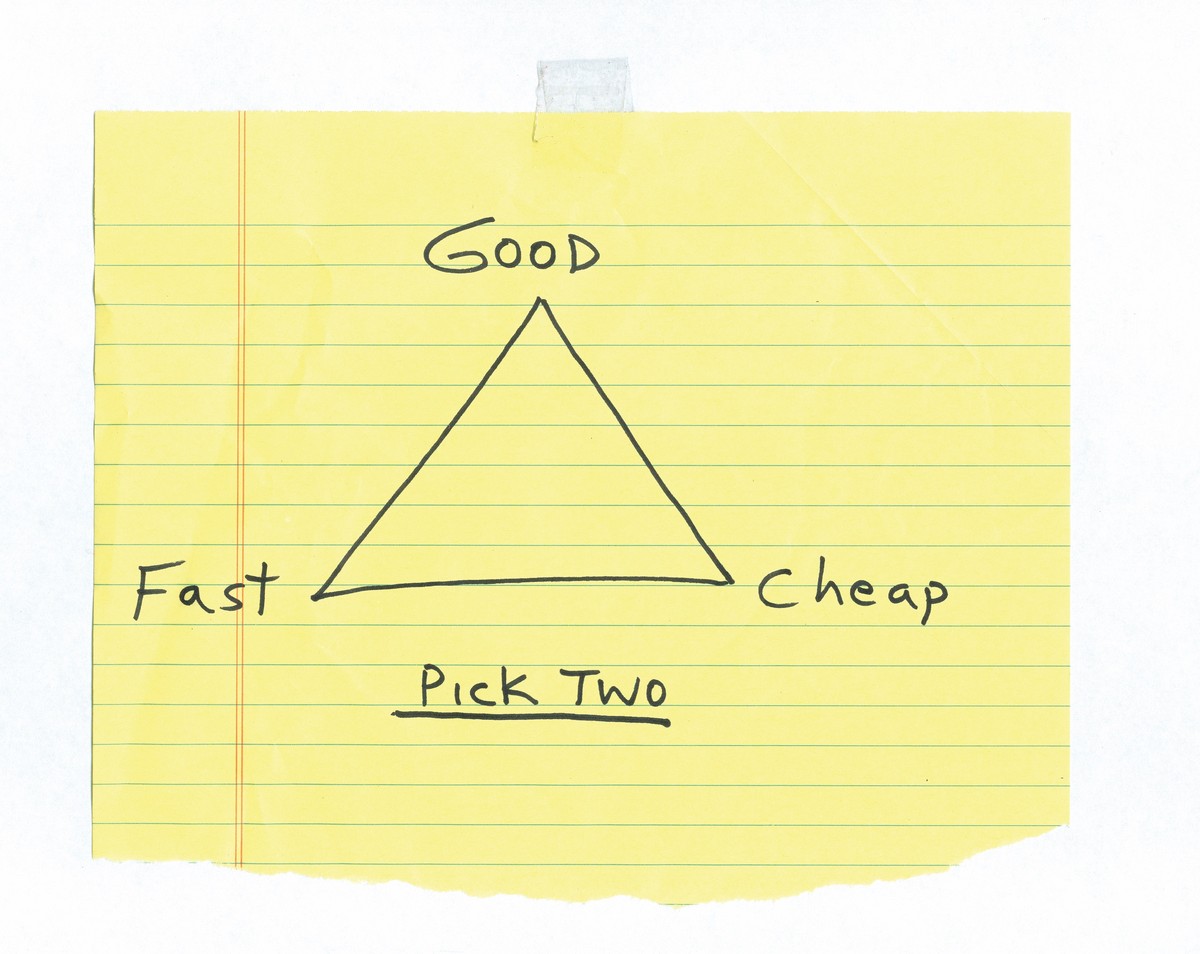 Maybe you've seen this triangle of wisdom at your auto mechanic's shop. That's where I first saw it: on a piece of paper scrawled with a Magic Marker and tacked up on the wall by my mechanic Dave, at Black Rock Automotive. Dave, mechanic to all the broke musicians and aspiring veggie oil burners of Northern California, has wisdom of the practical kind that is increasingly hard to find.

Then our own Scott McChane sent the scan above to Larry and I. It was after one of those weeks in the studio that has you questioning if you're really chasing down the right job, career or passion. And I'm sure most of you who've made recordings for other people for any length of time can relate to this sentiment:

Recently I was finishing up an album for an artist with whom I've done a lot of work. It was the notorious second album; always a tough go, but this one seemed even more so, due to a very tight deadline from our label. I was probably immersed too deeply in the project; not only engineering, but producing, arranging, playing and even helping with some eleventh hour songwriting. As we were getting closer to being done, but even closer to the label's deadline, I realized I needed help. I was quite comfortable mixing the first album we'd done and felt like I did a good job. But, in that scenario, there were no deadlines, no record labels and no pressure — we had all the time and objectivity we needed to make an album we were really happy with. It's a release I can still stand behind and feel really good about. But in this current interim I needed help. I knew I was in way to deep to try and mix this project and, with time running out, I definitely did not have the objectivity to do as good a job as I wished. "Here it is," I realized, "another triangle with only two options able to coexist: 'Dig in deeply, dig in objectively, dig in quickly. Pick two.'" I've always felt that I work with musicians in a quick, intuitive and objective way. And I've always enjoyed projects where I've been able to really dig in deeply, spend more time and work closely with an artist. But this was the first project in a long time where I was on such a tight deadline. Something had to give. And one thing was already gone: my objectivity. Like Colonel Kurtz, I was in way too deep. I was sure my objectivity would return, but, in the meantime, our deadline was fast approaching.

In the end we had Thom Monahan (another Tape Op contributor) come in to mix the tracks. After a week with Thom, the album emerged (as did the idea for this end rant). He quickly and objectively brought some order to our chaos. We spent a bit more time after Thom left shaping the mixes with final touches. The songs and mixes came together and Thom was able to complete the triangle (or break it, depending on your point of view).

We are all struggling these days with less time and money to make records, but with no less of a desire to make them as great as they can possibly be. Sometimes there are limitations we may not overcome: You can't always buy time and you can't always generate more money, but you can find the wisdom to know when you need help. Or more time. Or more money... Or...

* I know this is a generalization, and that there are ways around it (record a great band live to 2-track?). But every recording scenario has its own set of working parameters like this.