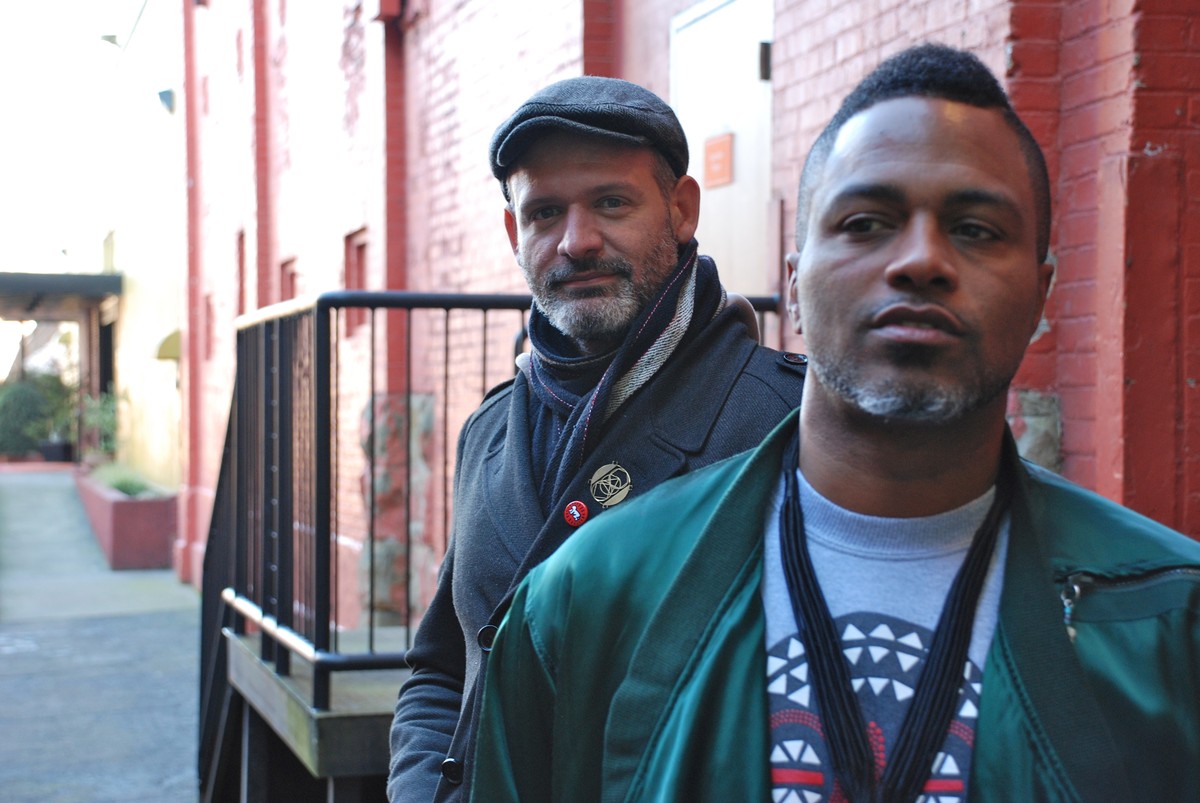 Since 2009, the partnership between Ishmael Butler and his post-Digable Planets outfit, Shabazz Palaces, and producer/engineer/artist Erik Blood, has yielded some of the most interesting and futuristic hip-hop music in recent memory. I sat down with Erik and Ishmael at their brick walled, dimly lit Black Space Labs in Seattle, WA. to talk about their working process and the color blue.

How did your partnership start?

Erik Blood: We met through our mutual friend, Bubba Jones. Bubba ran studios I used to work at. I wanted him [Ishmael] to sign my copy of [Digable Planets'] Blowout Comb. I think Bub played on the record I was working at the time with The Turn-Ons. Every time we metup, we talked about working together. After two years, we finally started getting down to it.

Ishmael Butler: Yeah. I think the key to Erik and me meeting is really Bub. He's a Svengali-type everyman; a jack-of-all-trades — putting studios together and building houses. His mind is always in construction mode. I think that he even thinks of the humans that he knows in that way. He'd always tell me, "Oh, you gotta get with Blood." So he knew what would happen, to a certain extent. I think he thought we'd have a fruitful compatibility, sonically. I always think about him when I think about Blood, because he was so right. It was a really good accompaniment, almost telepathic. Our taste is similar, which is rare. We don't even make the same kind of music, really. We do — we know we do — but when the product comes out, it doesn't sound that similar.

So what was it about Erik's production style and engineering that drew you in?

IB: I think [it is the] passion for the intricacy of mixing and recording. That's rare. Also to have a lot of style and taste. To be able to look at other people's shit with a critical eye. He's critical, but he can also understand where people are coming from. You can be comfortable, and when you're composing you can think farther out. It's warm, soft, thick sounds. You can start putting those combinations together, and you can have infinite outcomes. It was promising and exciting in that way.

How do you work together as a team?

EB: The process always varies. There's never a set way that anything is done. That's not necessarily intentional, but that's how it happens. What I do is try to translate anything that he's hearing in his head into reality. My whole goal is just to help him make music.

Can you give an example of a tune and how you started it?

IB: I could, but it wouldn't really be that accurate, in terms of how it goes down. After the composition, the recomposing, and then the mixing, it's like the characteristics of all of the songs bleed into each other. I think an example would be maybe on "Dawn in Luxor."

EB: I don't know how to even put it. We speak in codes, and we understand each other in a way that wouldn't translate. If we were to verbatim just tell you what was going down, it would either not make sense or would be extremely mundane.

But do you have a lyrical musical idea? Do you work independently and then collaborate?

IB: Everybody's always doing something at home — coming up with a beat. If it's a Shabazz Palaces project, then I probably came up with the beat and the initial kernel of the idea. If it's Erik Blood, he came up with it. If it's Chimurenga Renaissance, Tendai [Maraire] came up with it. If it's THEESatisfaction, Stas and Cat [Stasia Irons and Catherine Harris-White] came up with it. Blood's the conduit, the river that we all cross to get to the finished product. We usually start out with a groove or something, and then we get to talking about it. It may end up somewhere way different from where it was; but yeah, that's pretty much how it goes.

Are you creating the lyrical landscape after the fact, or are you coming in with lyrical ideas?

IB: Both. Nothing's ever lyrically finished until pretty much the end. I never come in with a finished song. I wouldn't even want to.

How has your role...