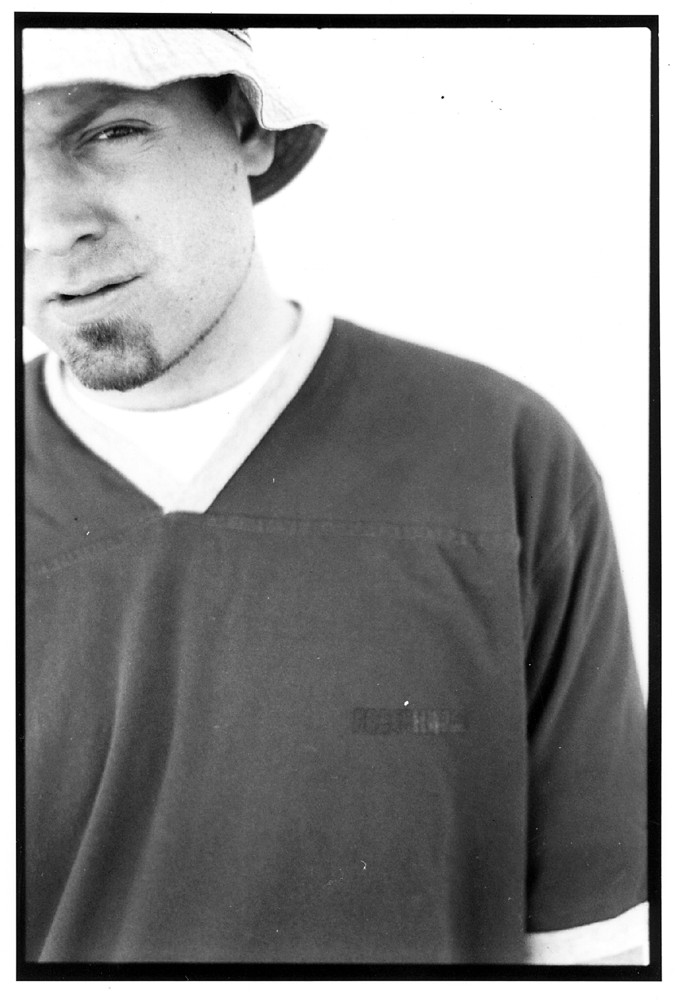 Home recording has taken some serious leaps during the nineties. A four track and a couple of cheap microphones used to be the standard setup; nowadays it's just as common to find a sampler, turntable, and an ADAT, ProTools or hard drive recorder. This "Do-It- Yourself" ethic is very prevalent in the sample based DJ/Electronica world. Is it more chic to go out and buy a sampler rather than an electric guitar? Electronica is the new punk rock, and there are no rules for this subculture's art form. DJ Shadow (AKA Josh Davis) is a perfect example. Here you have a middle class, white kid from suburban Northern California that grew up listening to hip-hop. Most of his work is done at home using only a few pieces of equipment. Shadow's debut album, Endtroducing (Mo Wax Records, 1996) came out of nowhere. It sold quite impressively, and launched him and the rest of the DJ world into the plain view of record buyers worldwide. Shadow's flavorful, sample driven combination of huge breakbeats and spacey organ and bass loops landed his album on top ten lists everywhere. Shadow has now released a new album under the name Unkle. Unkle is Shadow's collaboration with Mo Wax Records founder, James Lavelle. Shadow has been quoted as saying, "He's the director and I'm the DJ." What this translates to with Unkle is this: Shadow creates the music while Lavelle brings together other artists such as Radiohead's Thom Yorke, The Verve's Richard Ashcroft, Beastie Boy Mike D., and many others to add vocal and instrumental collaborations. I was able to sit down with DJ Shadow and talk about some of his gear, his approaches to music, and the making of Unkle's new album, Psyence Fiction.

What is your set up like, equipment wise? I'm sure you've been asked many times.

Well, I don't mind talking about it anymore. Mainly, I just use an Akai MPC-3000.

Will you continue to stick with that sampler?

No. I think it's time to move on. When I first started using my MPC-60 Mach II back in early '92 it was so new. No one was using them. Everyone was still so SP-1200, SP- 1200,SP-1200. Now, it's time for something new. I think that when you change your instrument, you change your sound. But, I still want to keep it simple. I don't want to fall into the trap that a lot of producer friends of mine fall into. A lot of people that I look up to make the same mistake. When they are having a hard time making music, they spend a lot of time and energy on getting new gear. They feel that because they are reading manuals, they are working. However, they aren't making anything. It's easy to get caught in a tech trap where you never put anything out, but feel like your new piece of gear is going to put you on the top. My home studio would still fit on a dinner table. Turntables and my 3000.

Did you use the same equipment for Endtroducing and Psyence Fiction?

I've heard that you never use computers. Is that true?

The only time I use Pro Tools is for the editing and sequencing of the album. For Unkle, it was just used to de-click some of the really noisy samples. At the very beginning of making the Unkle record, I was feeling very self-conscious. I was hearing all these chops on drum and bass records that I couldn't do on the 3000. I played around with Cubase a little but then I decided that I already had my sound and that I'd stick with it for a while.be inspired, you need to live a little bit."

How much multi-tracking do you do?

Endtroducing was recorded to ADAT because that was all that we could afford back then. The Unkle album was multi-tracked to 2" analog. Jim Abbis did the actual mixing but James and I were there for every minute of it.

What about outboard gear? Any certain pieces that you like a lot?

The MXR Pitch Transposer. It was something that Mario Caldato Jr. from the Beastie Boys introduced me to. That's one of the few pieces of outboard gear that I've ever sought out and bought. I used it a lot during my DJ set when I was touring Europe with Radiohead.

Are all the sounds you sample already pre-recorded? Would you ever commission musicians to come in and play parts that you have written?

Jason Newstead from Metallica played live bass on one of the Unkle songs. That was because I couldn't find a bass line that I liked. That was the only reason. I used his bass line because after working on the beat and guitar sample for six months, I still couldn't find a bass line to sample. It was too strange of a melody. I grew up on sample-based music. Breakbeats are the foundation of what I do. I like the fact that, even though it doesn't always sound the greatest, someone could go out and find the beats. They are out there. Everything I use can be found somewhere else if you look hard enough. I think that makes it very interesting. I love finding other people's samples. It's great to not only find the sample but then to also see how it was used. It's great when people aren't lazy and take the sample as a whole. I like it when people chop up stuff and flip it around.

On the Unkle song Nursery Rhyme you made a piece of music that is entirely made out of samples sound like a...