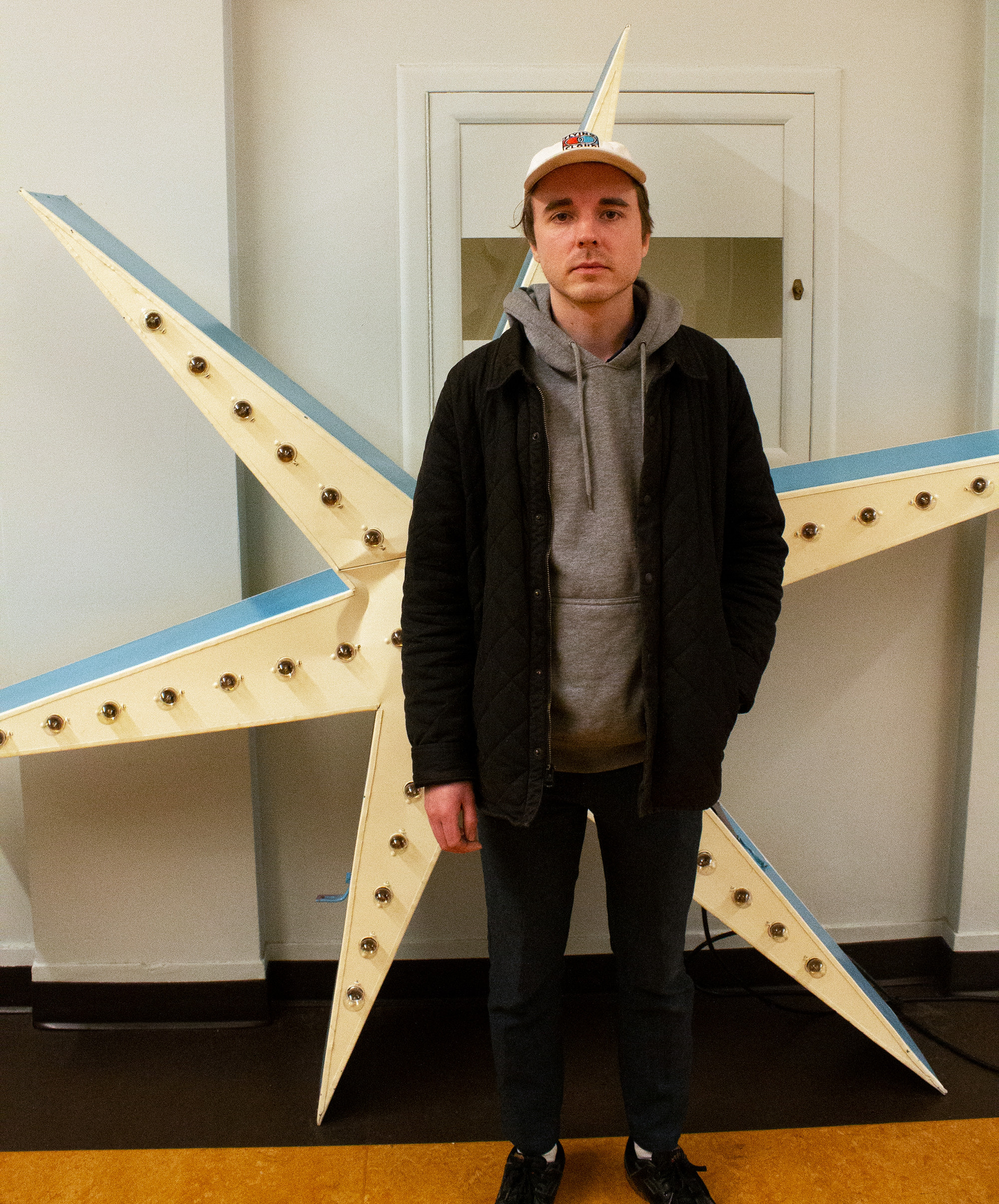 Around five years ago I went to see Low [Tape Op #31] play in Portland, and their opening act was a guy with a guitar who had a unique singing style. At first, I sort of tuned him out, but within minutes both myself and a friend of mine turned to each other and said, "This is the real thing." We weren't the only ones to notice – the entire audience stood captivated by his performance. It's hard to explain what makes one artist instantly compelling over another. I mean, how many people have we seen get onstage with an acoustic guitar? But when someone has crafted songs as compelling as Andy Shauf's, it is a cut above – the whole club shuts the fuck up and listens.

Andy's new album is The Neon Skyline. He played it all, recorded it, and he did one hell of a fine job.

How were you recording music early on?

Sound Recorder was a little built-in PC app with a record button, and you could go for 30 seconds. In high school, I'd mess around with it and say swear words backwards. I was like, "Oh, I could record my own music with this, because we have a CD burner." I got Cool Edit Pro, a free version that had three tracks. I got my friend to make me an XLR-to-1/8-inch cable so that I could plug straight into the mic input.

So, you could put a real mic into the computer?

Yeah, a [Shure SM]58. It was three tracks, so I would record on the first one and the second one, bounce to the third, and keep moving that way. When I graduated high school, my parents bought me a Yamaha MG06; a little mixing board with four channels. I'd record that straight into my [computer's] sound card. I was figuring things out.

Were you recording drums and different instruments as well?

Yep. I would take my mic and point it roughly at the drum kit or piano. I had no idea what I was doing.

Your parents were musicians, right?

Yeah. When I was a kid, we ran a Radio Shack store and the distributor [carried] music gear too. We had lessons and they sold guitars. I had a drum set, a bass guitar, an electric guitar, and an acoustic guitar.

And the piano was there?

Yeah. It was great.

Had you studied different instruments when you were young?

I figured them out. I played drums when I was young. I took lessons eventually, for drums, in high school. But that was it.

It's all just a bunch of buttons!

Have you gone back and listened to any of those recordings?

No. I have a friend who has a bunch of them on his iPod. There are people with those CDs. The summer before grade 12 I made a record at home that I sold to classmates all year. That was how I had any money to do anything.

Yeah. I sold quite a few. It was great. Somebody's probably out there holding onto one. They're going to blackmail me with it later! [laughter] After that, [I recorded] Love and the Memories of It. That was around 2006; I would have been 19. I had a little setup in my parents' basement for a long time. It's a Yamaha mixer straight into the mic input on the sound card. For Grandpa Songs, I got this old Minerva guitar from my grandma. It was my grandpa's guitar from the Ô30s. It sounded crazy, and it was tuned way down to C because of the neck tension. You could only play at the bottom [of the neck]. I did that one in an apartment, or my parents' basement.

Were these still self-released?

Those I sold. For Love and the Memories of It and Grandpa Songs, I would burn the CD-Rs, fold a piece of paper, and staple it. I would have shows coming up, and I'd have to say, "Mom, I blew it. I have a show tomorrow, and I need to make 50 CDs." She would help me. There was a point where I was also sewing cases for the CDs, and that was a Mom job, for sure.

Do you see those around at all these days?

Someone sent me a picture on Instagram the other day of the paper case ones.

How were the songs evolving?

The Grandpa Songs one; those are the best songs I was writing in that period. I was making a concept record based around my grandpa's life, because I was using his guitar. I just used that guitar and some percussion sounds. It was all harmonies; every track had five voices on it. That was a big step for my writing process. It's a bunch of love songs; I have no idea [now] what I was basing anything off of. That one was like, "Okay, this is a different sound than trying to write emo love songs."