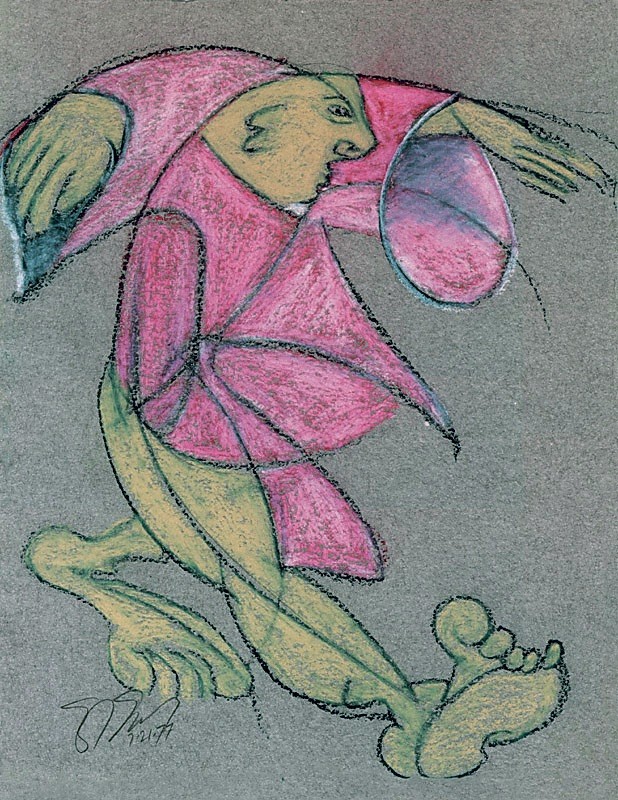 My job as a recording engineer deals with the reception and transmission of music. This involves working with musicians in a special kind of laboratory commonly known as a recording studio. The most important and yet abstract aspect of the recording process is unveiling and calling forth the creative source. In other words, where does music come from and how do we access it at will? How does it arrive on the scene? How do we invoke it into being?

There is a special class of outboard equipment that subtly, yet markedly helps to open the creative channels for everyone involved in the session. This technology is the use of fine art and other visual images in the recording studio. Light wave harmonics that may potentially instigate or aid musical trajectories in a variety of ways.

I began working with visual images in the recording studio after reading about Dr. John Lilly's repeating word tape loop experiments in his book The Center of the Cyclone. He would record a single word such as "cogitate"and loop it. I should mention that this was in the late '60s when the whole idea of a loop, information repeating over and over, was completely unheard of in music. People listening to the repetition of the word "cogitate," after a few minutes, would begin to hear alternate words such as "commentate" or "conscious rate" even though these words obviously weren't on the tape. Lilly had some of these alternate words printed on cue cards. In subsequent "cogitate" listening sessions he had these placed just barely in the subjectís peripheral range of vision so that they could see the card but couldn't read the word on it. As soon as the cue card was peripherally shown, the person would report hearing the alternate word that was printed on the card. This led Dr. Lilly to conclude that what you see strongly influences what you hear.

My intention was to upscale the aesthetic in the recording studio by introducing artistic visual images of a very high quality. Many studios have a neutral, institution-like feeling about them. The exact opposite of what you want in a creative environment. I was aiming to create a space more conducive and resonant to musical expression.

I began using images from magazines and art books, usually of religious icons, mandalas and surrealistic pieces. Musician/producer Bill Laswell liked the idea and encouraged me to take it further. Every time we had a session there would be additional art on the walls but he could always see there being more. Finally, on a session with Bootsy Collins, I arrived 3 hours early and covered every inch of the control room with esoteric pictures. The studio pulsated so intensely with visual impressions that we all felt like we had taken a psychedelic. Needless to say, it led me to experiment with subtler techniques.

I've worked with this artwork for over 10 years now and it always seems to help bring about a subtle mood-shift that can intuitively open one up to receiving the musical current. I also find that art adds a balancing visual counter-tension to the constant amount of listening that recording entails.

On one occasion, in 1990, I arranged it so that the first sight Tony Williams saw when entering Laswell's Greenpoint studio was a Reductionist piece called Star Eater by E.J. Gold. His playing that day has been described by critics as his strongest and most wide-open in years. It can be heard on a CD called The Word by Jonas Helborg (Axiom). Seeing Star Eater was just one possible contribution to his inspired drumming that session. Art in the studio tends to open up fields of possibilities otherwise non- existent. It introduces new information and a new dynamic that can provoke and stimulate an inspired performance. In Quantum Physics, (inherently operant with all the electron manipulations going on in the studio) when you multiply one possibility with another possibility you get a probability.

More recently, I was recording Kirk Hammet of Metallica at Les Claypool's house for the last Primus release when he suddenly exclaimed "That's a great painting!" He was referring to a small canvas by Gold that just happened to be in his line of vision. It was a simple abstract piece with conte crayon and a bright yellow wash. The image could look like either a tree or the infinity sign. Later Kirk said that he was keying in to the painting and that it was helping him to focus and concentrate on the overdub.

Some of the most enlightened musicians I've recorded were Native Australians (often ignorantly called Aborigines) connected with the group Yothu Yindi. They brought in huge banners of their native art which they draped all around the control room. It made for a very intense space. Toward the end of a 10 hour session the walls seemed alive, lizards and other creatures winking at me. Another natural psychedelic space induced by hard work and visionary art. The music was as equally intense but unfortunately didn't survive to see the light of day. It was deemed too noncommercial by record executive non-visionaries and was diluted and smoothed out for the pop market.

I now regard fine art as an essential piece of studio outboard gear and use it as much as possible always being sensitive to the proclivities of whomever I'm working with. It's my hope that this little essay will encourage studio owners to consider the aesthetic environment they are presenting to their clients and to themselves.