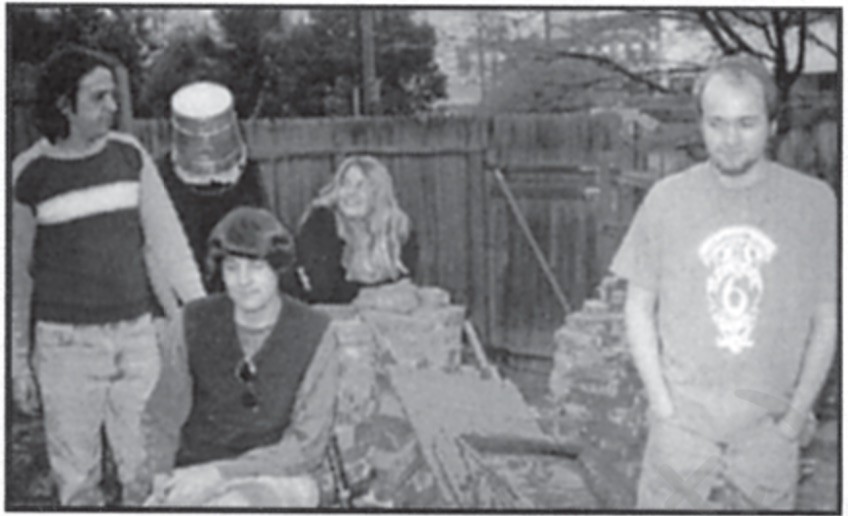 We caught the Apples at a strange Portland gig opening up for some shitty local bands.  Many people who came to see the Apples play ended up seeing us interview them instead.  They're a wonderful, pop-psychedelic combo from Denver, Colorado (although none of them really are from there) and they love to record their own music...as well as play live.  Their latest album is called Fun Trick Noisemaker, and they also have a unique deal going with their record label, SpinArt, who not only encouraged them to record on their own...well, you'll see!  Robert, who's sorta the main songwriter, singer and plays melodic leads on his guitar, did most of the talking.  Hilarie, the drummer with the minimal kit, had a lot to say too, but John (rhythm guitar) and Eric (bass) were either running around or rather quiet.

How did you get into recording yourselves?

I guess that's the way that we've always done it.  We've all been recording for a long time on 4 track and stuff.  I started when I was 15.  We recorded two EPs and some 7" records on a 4 track and we couldn't afford or want to go to a recording studio.  Plus, it was a really distasteful sound to our ears.

Have any of you been in bands that used a "real" recording studio?

We'd never been in other bands.  We didn't really know, when we first started recording on the 4 track[cassette], that you couldn't make something sound as good as a recording studio.  We knew the Beatles recorded on a 4 track; therefore, why couldn't we?  Then we found out you can't, so we got a reel-to-reel 4 track.  Now we have an 8 track.

What kind of 8 track?

An Otari 5050.  1/2 inch.  It sounds great.  We've got good mics.  I recorded a few albums, last year, after our own.  I recorded the Neutral Milk Hotel album [on Merge recs].  We did that on our 4 track , reel-to-reel.  Then I recorded the Olivia Tremor Control and the Felt Pilotes on 8 track.  I've gotten a lot better engineering since then...we're almost Hi-Fi!

That's cool, you graduated from 4 track...

We told SpinArt that we'd been in recording studios and we knew how to record.  They told us they'd buy us an 8 track if we got an engineer to help us with it.  We didn't have either experience or an engineer!

So, how many reels of tape sound really bad?

No.  With those good mics, you just set them up anywhere, never change the settings, and it sounds great.  Even an SM 57 on the bass drum sounds really good.  So, we just figured it out.  It was good enough on the 4 track, we just wanted 8 tracks and with these better mics it's gonna be better, anyway.  We didn't end up having an engineer.  We went to a friends's house in California and recorded.  We've become expert, technical engineers!

What kind of mics have worked really good for you guys?

The Audio-Technica 4033.  It rules.  It's so great.  They took the analog EQ curve from a bunch of great '60s mics and then they averaged it out and copied it on that mic.  It sounds real old fashioned and real warm.  The 4050,  the next model up, is too pristine.  It's a bit too fat and bassy sounding too.

Does everyone get into recording?

How did you get SpinArt to offer the cash to set up the studio?

They offered.  That was why we decided to do a record with them.  They liked our stuff and they wanted to put one of our songs on a compilation.  I told them how I really wanted to get an 8 track and they said, "Hey, we'll buy you an 8 track."  They knew about the equipment and they suggested some stuff and my friend Kyle had a studio, and he suggested some more stuff.  We ended up getting some high- end equipment.

A lot better than a regular advance!

Yeah!  We can keep it forever.  Not like we'll piddle it away.  I've recorded three other albums, I'm getting to be a pretty good engineer.  We got the money back and I got to live off that all year.

But these guys [the Apples] are the ones who helped you get the equipment and you get the money [from outside productions]??

I'm sorry.   What are some of your favorite records that sound cool to you?

I love the new Lilys album.  It's not out yet.  It's called Butter Can't Make Your Life Better.  It's amazing.  It sounds like the Kinks in 1966.  It's totally mod and it's beautiful and it's great songwriting.  I'm really jealous that he recorded such a great album.  I love Pavement records.

What about the Beach Boys influence?  On the album there's that one song...