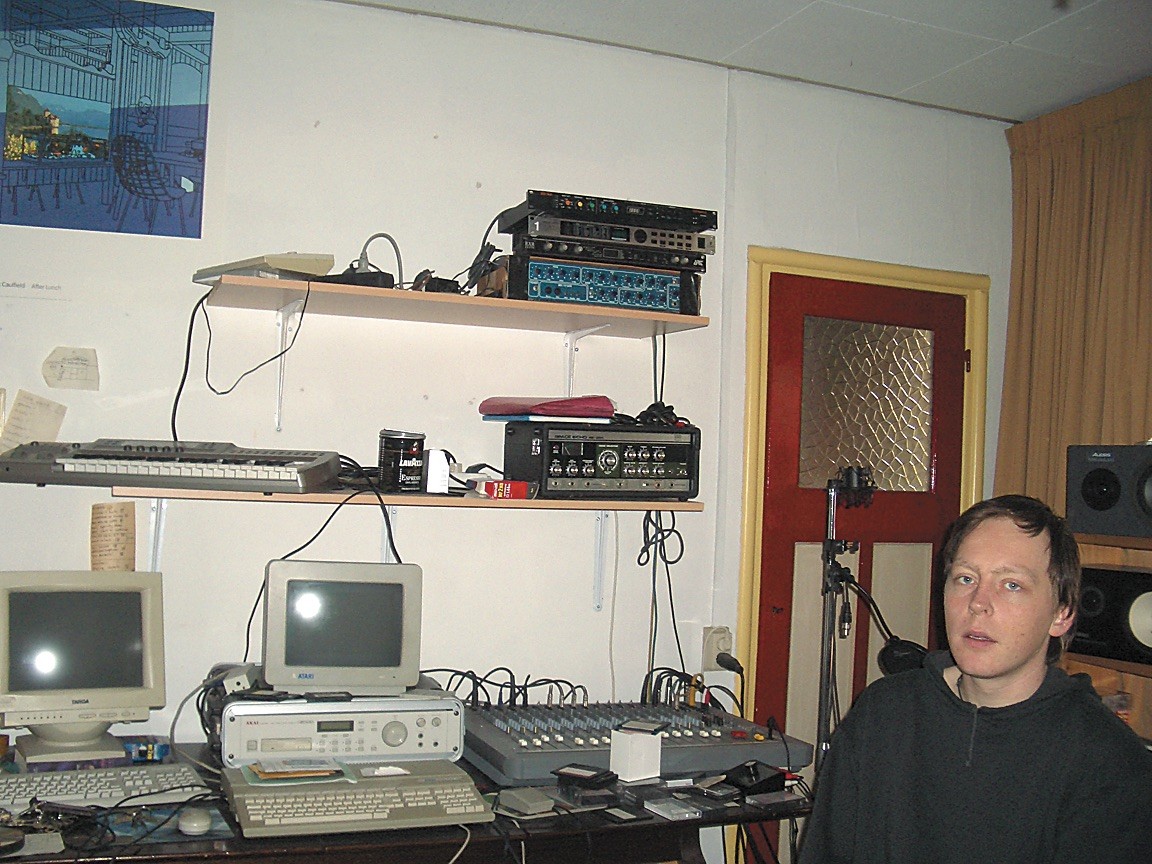 Amsterdam is one of my favorite cities in the world — plus some great music comes from there, like The Ex and Solex. While visiting there a while back, I asked Elisabeth of Solex who was doing interesting stuff recording-wise. She recommended I check out Zea.

Zea is a duo comprised of Arnold de Boer (guitar/vocals) and Remko Muermans (keyboards, sampler and vocals). They have several records out — Kowtow To An Idiot and Today I Forgot To Complain — of their scratchy, fun songs played on guitars, drums and electronics. It's a curious mix, not really sounding like electronica, and not really rock either.

I met up with Arnold at his apartment in Amsterdam on the eve of one of Zea's American tours. His place was full of instruments, recording gear and lots of CDs and albums. After this interview he turned me on to a bunch of music I'd never even heard of, like Jason Forrest/Donna Summer, an interesting sampling artist residing in Berlin. It's always cool to meet new folks and get turned onto new music, especially in one of the coolest cities in the world.

On your record you have drums — both real and not real.

For that record we had a rehearsal room, somewhere on the east of Amsterdam. Before, years ago, the band was five persons. At one point, some people took other directions, decided to do other things — and I was focusing more and more on electronics with my bandmate, Remko, who is doing the electronics live on stage. We sort of decided at one point we wanted to really go for a more electronic direction. But we still have that rehearsal room, which was pretty big, and there was some drum kits there and lots of stuff. So I decided to use it all. I've been drumming myself — I taught myself some drums and an old school friend of mine came over at the rehearsal room and drummed some parts that I told him, because it was too complicated for me — the same for bass guitar. Most things I just did there — guitars in the rehearsal room. 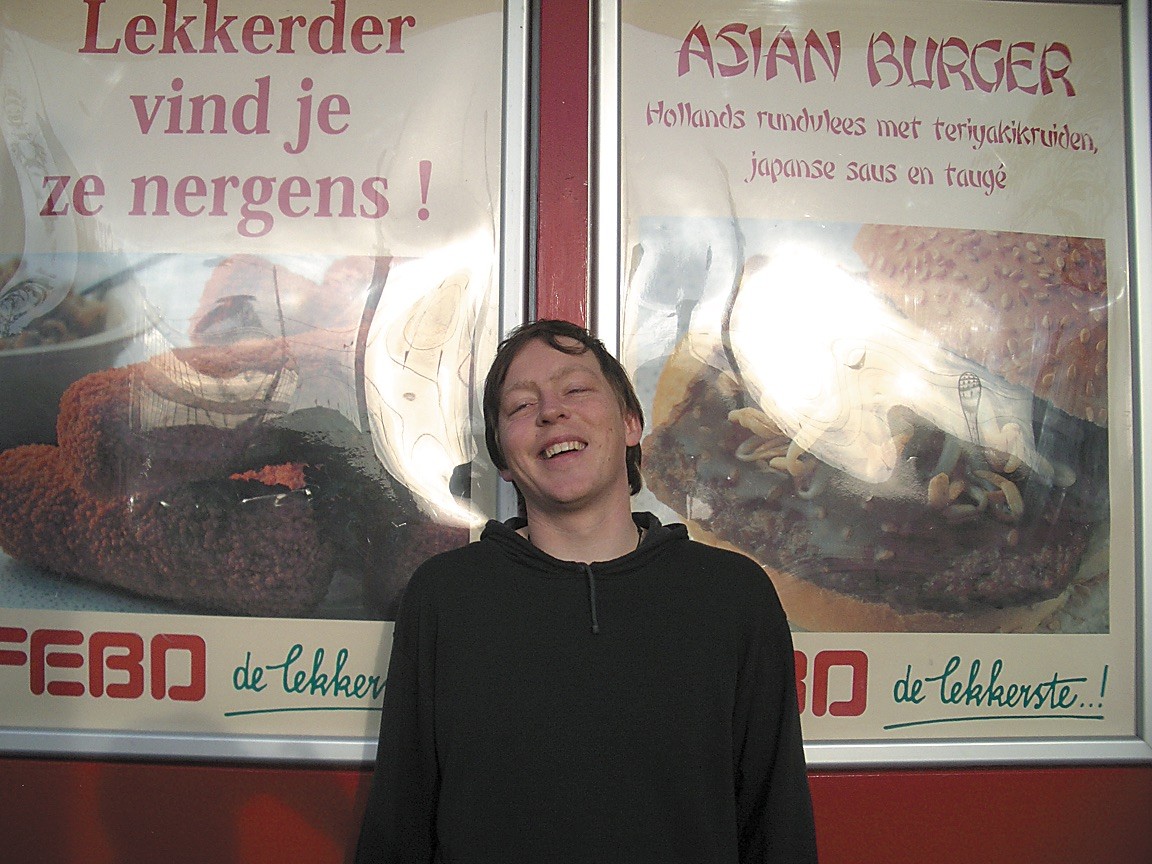 So you could make more noise in there than here?

Sometimes I'll do it here. My neighbor and I are good friends, but he told me a couple of times that, well, I should not make so... [laughter] So that's what I did then. There was one song on the album that I really thought needed a whole band feeling. So I invited this friend of mine and some other friend who is in another band, who is playing bass guitar, and we all played it at once in the studio.

So it's a mix. Do other songs just originate here, like with electronics.

Yeah. What I did was record these drums on a digital 8-track and bring it all home and bounce it in Pro Tools and cut it up.

Is there a song written or are you just putting down beats that you like, and then you're going to construct around them?

No. I always start from a song. When I make songs, I start with guitar. Ideas are like lyric ideas, vocal ideas, melodies. My mind always says, "Okay I want to make a song," but I want to be able to play it at a campfire. I want to have the song to play first and then — then all other things come to mind. Like lots of ideas for beats or sounds or samples or loops or bass lines or other melodies. But I always start from strumming the guitar.

Do you do a lot of rearranging once you start getting into the process of moving the parts of your song?

Yeah. For some songs on the Today I Forgot To Complain album, I rearranged a lot and some songs were straight there. It was like they had the feeling and I thought, "Okay, this just has to go like this" -the line is set and I just want to add beeps and bloops and samples. But some songs, I record the chorus and some other parts that I had in mind, and then it all comes in the computer. Then at one point I think, "Well I don't know. I shouldn't... it needs more." Then that's when you start to cut, paste, copy and try to find the thing that makes it more exciting.

What kind of Pro Tools are you using?

Well, at this moment I'm using the Mbox on the laptop. I just got that. Before I was using a Pro Tools card. It's an 8-track, digital in and out.

What did they call that kind?

Audiomedia card. I was running 8-track Pro Tools on it. I didn't have any auxiliaries. I had to process everything.

I finally got the Mbox. So now, 32 tracks and I have auxiliaries. I use some stuff — sometimes I make the beats in Ableton or something. Or just cut it up in Pro Tools.

You've got the sampler too.

Yeah, run the sampler. There's drum computer stuff that I run through MIDI from the Atari.

When we interviewed J. Robbins in issue #13 of Tape Op he told us we should interview John Agnello, a producer he had worked with in Jawbox and Burning Airlines. We countered with, "Why don't you...