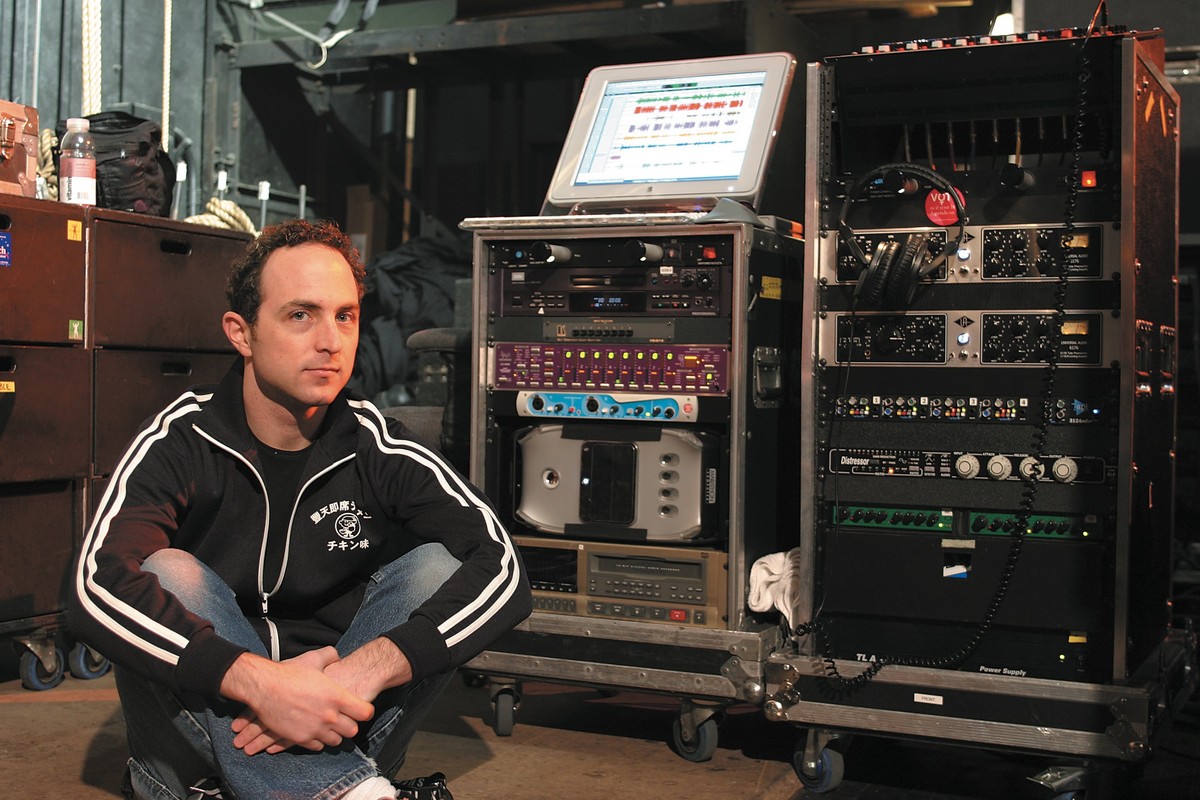 Michael Bongiorno faces unusual challenges as a recording engineer. Rather than working in the cozy confines of a traditional recording studio, he sets up shop in a different city every night, but always in the same place — off to the side of the stage at an Ani DiFranco concert. There, Michael captures her performances on a mobile Pro Tools multitrack system, for later release as part of the Ani DiFranco Official Bootleg Series.

How long have you been doing the live recording with Ani?

About a year and a half now. I put the rig together with Andrew Gilchrist — he had the initial design. We had a rehearsal day, all the gear showed up and we put it together in a day.

How did you come to be doing this?

I guess I got into recording like a lot of people: you have a band in high school and you just start doing the home recording thing. Then I went to school for it, started at UMass, did their recording program. It was a music school, very conservatory-style classical, and I just wasn't into it, so I ended up finishing at Emerson in Boston. What I did there a lot was I worked at the radio station, at [W]ERS, and I did a lot of live broadcasts. ERS was great because it had every form of music coming in: a cappella, metal, hip-hop, klezmer, Celtic. It was a tightly formatted station, but all these different shows had bands coming in. It was similar to this [live recording] because you had time restraints — it had to be up by such-and-such a time, and there's no going back and doing another take. That was all live to 2-track though, to DAT. After that I did a lot of assisting, like at Fort Apache. I met Kristin Hersh there, who was working with Ethan Allen, who used to be at Kingsway, which is how I got connected with New Orleans. I moved there for Kingsway, and then [Daniel] Lanois [Tape Op #37] sold it, so that didn't happen. I ended up spending some time at American Sector, which merged with Boiler Room to make Piety Street. I never got involved at Piety. I ended up getting involved with the Truck Farm, which Andrew [Gilchrist] [#12] was an initial partner in. So then Righteous Babe was looking for somebody specific to do this live recording, because before that they would pass it off to the monitor engineer, or the PA tech. They might just trigger the ADATs and not even look at it.

Yeah, I remember when I talked to Ani and Andrew about that [Tape Op issue #12] they described the resulting tapes as sixteen tracks of useless line hum and hiss.

No one was even monitoring it. Yeah, so they decided it was something they wanted to pay more attention and care to, and it wasn't happening by having someone else do double duty. My job at the time was not recording related, but I was spending as much time as possible at the Truck Farm, which is how I got to know Andrew. He suggested me for the live recording, and they brought me on, and it's worked out.

Do you record all the shows?

All the US tours, and Canadian. I won't go to, for example, Australia, because we don't bring any production there. It's very expensive to go there — they bring only who they have to. We might start doing European recording. We don't often do festivals either — that's another situation where it's somebody else's show. You're playing by their rules, using their gear. I rely on our production to get my feed, and we rent the same PA every time. It has a splitter box that has isolation transformers — it goes three ways: front of house, monitors, and myself. I have a totally clean signal coming in.

So that box is just off to the side of the stage?

It's in its own roadcase, with the amp racks and the EQs. I live pretty close to it — I'm actually positioned right behind the monitor engineer. And that's another challenge of producing in a live environment — you're not in a controlled environment for listening. I'm doing everything on headphones. But the mixes I'm doing during the show are rough mixes anyways. The important thing is to get clean tracks to Pro Tools.

Maybe this would be a good time to describe the signal flow of the whole system.

You've got to keep the rig small. It's already two road racks, about...