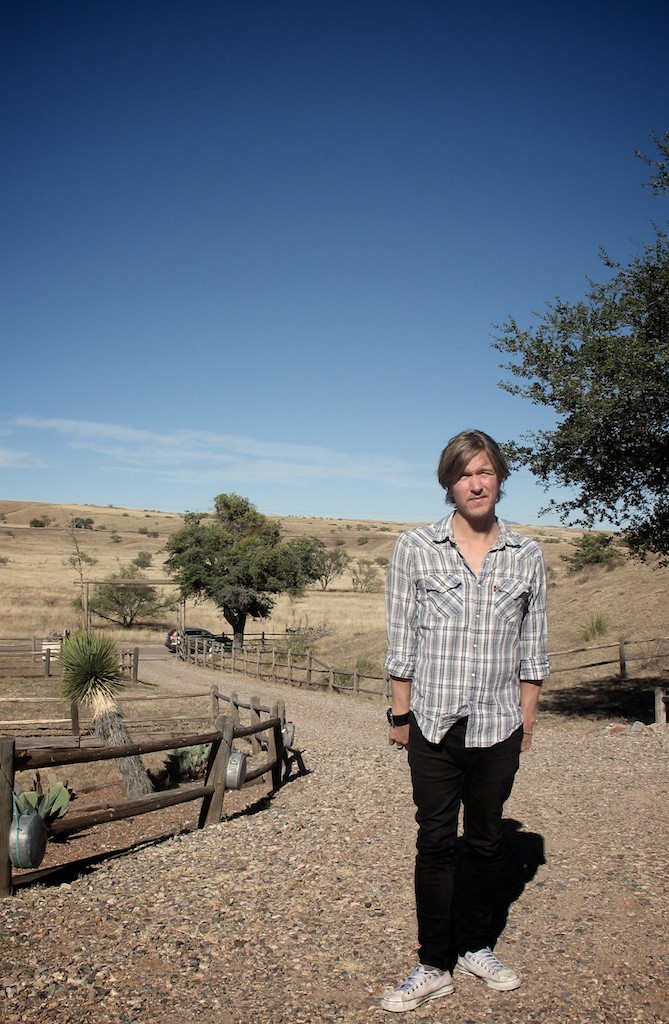 Ben Harris, along with Paul Harris and Steve Smith is one third of the UK-based group Dirty Vegas. I met Ben through his father in law, Snuff Garrett (Tape Op #73), and interviewed him at Snuff's home in Arizona. Dirty Vegas were about to release their "comeback" album, Electric Love, and Ben has kept busy since!

What were you doing before Dirty Vegas?

I fell in love with music in school. I was in different indie bands around the London live music scene. I had a band called Fluid. We just did the local circuit and we were getting interest from labels.

Were you playing guitar?

Guitar, yes. Some of us were going off to college and some of us weren't. We decided if we didn't get signed by the end of the summer that we'd go our separate ways. We got down to the wire and the band split. I didn't want to go back to college, so I applied to every recording studio in the city, looking for a job. Tea boy, gofer; anything. I sent out a letter to 70 studios and got one reply back; luckily I got the job! [laughter] It was at a studio in Camden. Camden is a big hotbed for live music and clubs. I started to grasp the basics of how to record. It was fun to learn.

What kind of work were you doing initially?

I wasn't allowed to touch anything. I couldn't even touch the tape deck at first. It was about sitting in the room and being quiet, and fetching a drink if anyone asked! I'd run errands at lunchtime. You just ask questions when you get the moment. After I'd been there a few months, they let me man the 24-track machine. I was there for overdubs and whatnot.

Yes, literally the tape op! I was lucky, with how technology is, to be young enough to get my foot in the door when people were still using 2-inch tape machines. That was great. It's incredible what you can do with technology these days, but there's some fundamental basics of recording sound that you learn from those old methods. Just to see the old pros using that in front of me was just fantastic. Occasionally they'd sync up two machines to get to 48-tracks. You have to get creative! Sometimes I think limitations can spur the creativity. Too many choices aren't necessarily a good thing.

I'm sure you end up with tracks where there's a lot of stuff going on with the Dirty Vegas stuff.

Yes. That sometimes is the hardest thing; especially when you're trying to write an album and you've got an overabundance of software. You can literally come up with anything within one song, but the challenge is to keep the focus across the album. That's where it gets tricky!

How did you meet up with Paul Harris (band member, not related)?

Paul and I met first, but the three of us all lived in the same neighborhood. We didn't meet until we were 18. I'd opened up a small record shop in my little hometown of Bromley. The house techno scene had really taken off and it gripped everyone. We were selling a lot of those records. Paul was a DJ in London; he came in the shop to buy records for his work. We started talking and we got on great. I got to a bit of a stale point and I wanted to try something different. I called Paul and we started laying down some tracks. We started a thing called the Hydrogen Rockers, which was an underground house techno remixing production outfit. We'd do that underground club rock thing that was going on in London at the time. From there, he had a chance meeting with Steve [Smith, vocalist] at the airport. Paul said, "This guy is pretty good. We should look into producing his albums." We sat down one day and listened to some acoustic tracks. One of them was "Days Go By," and that was it. We just went straight into the session and had it done in three or four hours!

And that changed your life, just a bit! [laughter]

Umm, yeah! That changed everything. We felt, "Something great happened yesterday. We've got to explore this." It just took off from there.

I thought it was interesting that you guys were initially being compared to Fat Boy...