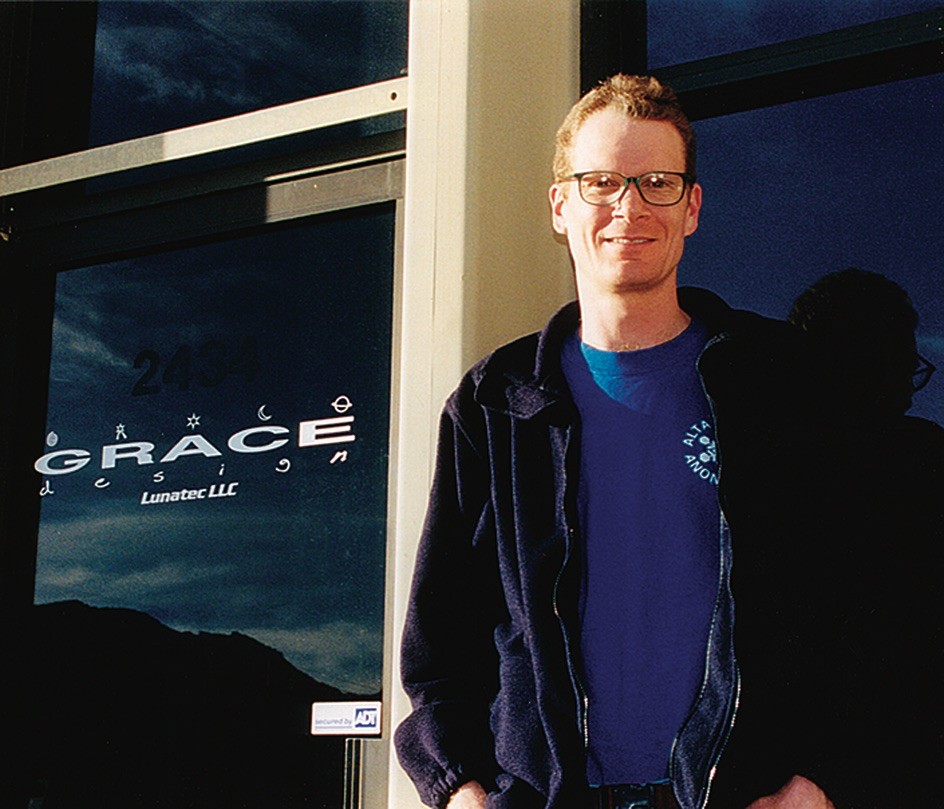 Michael Grace started Grace Design in 1994, a boutique pro audio company located in Boulder, CO. The story of his rise as a designer is one born from a love of music. His need for a preamp to record Grateful Dead concerts drove him to design his first piece of gear. We talked about how this need grew into a highly regarded gear company.

How would you describe your design aesthetic and design process?

The key word for us is "musicality". The ultimate goal in designing all of our audio gear is that in the end when you're listening to it, you shouldn't be hearing it — you should just be hearing the music. Along with "musicality" is "reliability", and those are the two things that we focus on with equal intensity. The best sounding piece of gear in the world doesn't do you a lot of good when you're at a session and there are musicians waiting around and something is broken. I've done enough live remotes to be absolutely intolerant of any kind of reliability issues. Those are the two prime objectives, but obviously ergonomics and industrial design play into that as well. Pride of ownership of a good piece of gear goes beyond just knowing it sounds good, but when you go and reach the knob it should feel solid and give you confidence. It shouldn't have whistles and bells that you don't really need and it should be laid out so that you can quickly and easily achieve your task and get on to other important parts of creating music.

There are a lot of preamps being developed and marketed these days, ranging from clones of vintage gear to new variations of tube-based preamps to "Made in China" $200 bargain-basement preamps. What does Grace Design bring to the table that is not being done by other gear developers?

The final test of any piece of audio gear is how it sounds. I think that is something that's not achieved through a singular design criteria like "discrete" or "Class A". It's something that is achieved through a holistic approach, taking a careful look at every aspect of the signal path, from passive components to power supply layout and grounding as well as amplifier topology. All of the amplifiers in our products in the critical gain stages use an amplifier topology called a current feedback amplifier, or a trans-impedance amp, and these types of amplifiers use a different kind of negative feedback in the current domain instead of the voltage domain. They are able to track really complex waveforms, resolve rich harmonic structures and track transients without the various aberrations of slew rate limiting and things that are associated with textbook op-amp designs. I think people's problems with IC [integrated circuit-based] designs are that most are using standard op-amp type amplifiers that have these problems, and that is the characteristic solid state, integrated circuit sound that people are used to. I think the use of trans-impedance amplifiers gives our products the ability to have a very musical, very transparent sound and still be really linear and accurate, without having a solid-state characteristic. In a lot of our listening tests, when we'd compare our products to other types of preamps (our competition and vintage pieces and such), we were always kind of amazed that we found our preamps sounding closer to the higher quality tube preamplifiers than the ones you would expect to be aligned with, like other high-end solid state preamplifiers. There are so many other circuit decisions that have an equal effect on the overall sonic characteristic of the product. That is why we use only ultra precision metal film resistors and there are no electrolytic capacitors anywhere in the signal path. We try to direct couple as much as possible to keep the number of components in the signal path as low as possible. If you're following a design process with your ear, you're going to come out with something a lot different than if you follow a design process with analyzers and scopes.

What was the first piece of gear you ever designed?

As a designer you are always influenced by other people's designs — my very earliest designs were adaptations of high-performance phono preamplifiers. I dropped out of college and started working for a high-end home stereo amplifier and preamplifier company in Colorado Springs. This particular company really focused on things like eliminating capacitors from the signal path and using zero negative feedback or using...