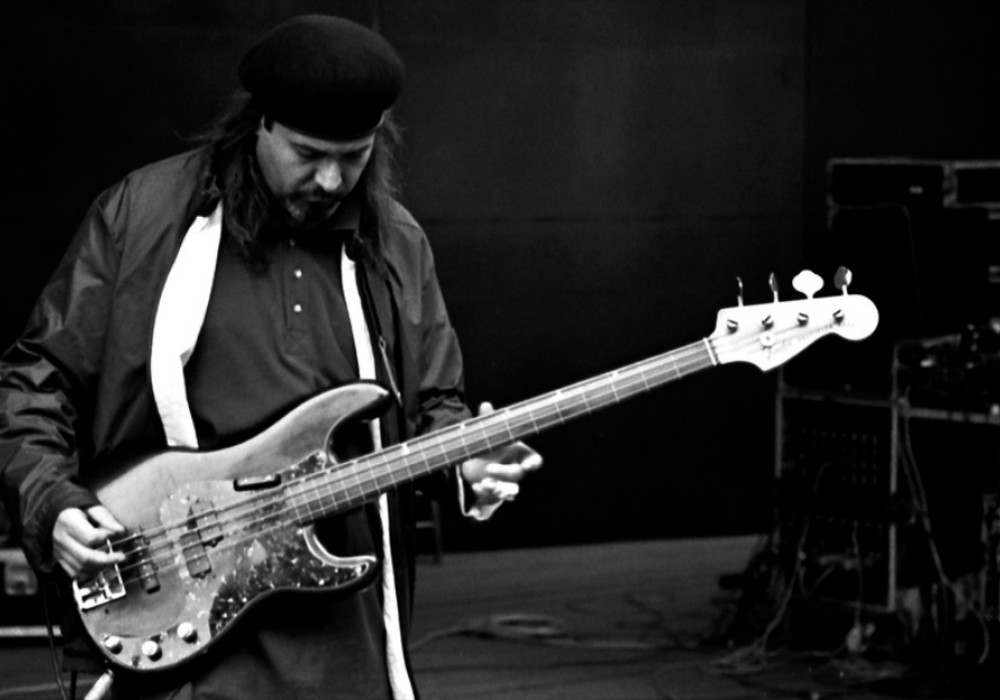 Whether printing complex mixes, section-by-section, through old Neve consoles without automation to 1/2-inch tape, or hauling recording rigs and generators into the mountains of Morocco, Bill Laswell embodies a fearless resolve in creating a discography that no one can touch in terms of depth, breadth or sheer number of records produced. I started digging Laswell in the early 1980s, and was particularly intrigued with his fluency in the languages of then-nascent hip-hop, as well as reggae and the electric rock styles of West Africa. His incongruous collaborations with musicians from different parts of the planet, as well as regular use of some of my favorite musicians from the worlds of Parliament/Funkadelic and reggae were always wrapped in sounds, textures, and rhythms just a few steps ahead of the bleeding edge of NYC club styles. Everything that appeared with Laswell's name on it was a challenge of some sort, aggressively demolishing notions of genres while always expanding ideas of sonic possibilities. Some of the most interesting people and projects Bill has produced include Ornette Coleman, Santana, John Zorn, George Clinton, Pharoah Sanders, Iggy Pop, Herbie Hancock, Buckethead, William S. Burroughs, Tony Williams, James "Blood" Ulmer, PiL, Praxis, Material, as well as re-workings of Bob Marley and Miles Davis.

I've been a friend of Bill's since the late 1980s, via his long time engineer Robert Musso, who had initially hired me to run his MuWorks label. I went on to run Bill's Axiom Records for the first half of the 1990's. Bill also pushed me into founding the Tzadik label with John Zorn, and got me on the payrolls of Rykodisc, CMP and other labels as a consultant. Bill's blessings allowed me to travel worldwide, become friendly with many of my musical heroes, and, most importantly, spend a lot of time in the studio with him.

There was a time when a record was a budget and an idea, right? Obviously the ideas aren't going away, but what does a record mean these days?

A record means nothing these days. What means something these days is the experience of hearing the music and hearing the sound. A record is a receipt. It's like a document. Records now are just business. Music is vast. Endless. I think playing live is really important. Recording live music is really great — documenting live experiences is really important. As far as those days where you sit down and you craft the record and it takes Axl Rose seventeen years to make a record... That's good or bad — why? Records don't necessarily mean all that much. It's the experience and the memory. Records are just memory. Notation is memory. Tape recall is memory. Music should be experience — memory. Get past the 'solid' of it. I still like the graphics and whatnot. I still like hardcopies. The download thing — the only reason I don't like the download thing is because I like hardcopies. I like to have the thing. It's like, "Did you buy the painting, or did you hear about it?" I'm conscious of the money but I'm getting it other ways. I'm telling motherfuckers, "You owe me money." People say, "You're a national treasure. You changed my life." I say, "Good. Give me money." It's not business anymore. That shit wasn't business anyway. That was oppression. It was manipulation.

And always dealing with the bullshit because the traditional business model was so foul...

And dealing with people — on one side you have the artist, who knows exactly what he wants to do, and on the other side you have an asshole who has not a clue. So, what kind of relationship is that? There are very few exceptions.

So how does it work without money?

We'll get money. People say the economy is bad. Fuck the economy. People say times are hard. People are cryin'. I don't buy that. From the clean slate, you build the next music. You start from nothing. It's going to be the next phase of music — "entertainment" has very little to do with what I'm interested in. I just did this record with a Dr. Frank Lipman; he's an acupuncturist from South Africa who's treated many, many people — including [Nelson] Mandela — heavy people. His concept, when I met him, was in the West we either don't know, or we've forgotten, why music happened. It was for funerals. It was for weddings. It was for giving life. It was for killing. It was for all these heavy things. All of the sudden it turned into business, and it turned to dancing around on a stage, and that's not what it is. I hooked up with this guy and I did a record, it is called Spent. "Spent" means when you are just done. Well, I was spent. I couldn't walk. I related to the guy a lot. I got a call from yoga people that I know. They said, "You have a huge fan. He's one of the greatest doctors in the world. He wants to see about rehabilitating and restoring your muscle." It's hard to get up, even now. I have to use a handrail to get up the stairs. That shit was serious. So I made this record. It's called, Spent: Beats to Bring You Back. We did the cover. It's a compilation, basically, but I did mixes, cross fades and whatnot. It makes a lot of sense. I was thinking maybe that's the key to part of the future, of what's going to become. Because the music business is done. Major labels, big business, CEOs getting millions of dollars from sitting around doing nothing — that's done. Bands should be dropped. All bands. Keep ZZ Top. I like them.

Reminds me of some of the deepest kinds of music there is, like the deep Vodou stuff in Haiti — the only reason you bring the serious drums out is to take care of some business.

Yeah, the only reason. A lot of Africa is like...

Michael Joly has quickly gained a reputation for ironing the wrinkles out of a well-designed but inexpensive microphone, at a "Bang- for-the-buck" price which most of us can easily afford. Even so, I...