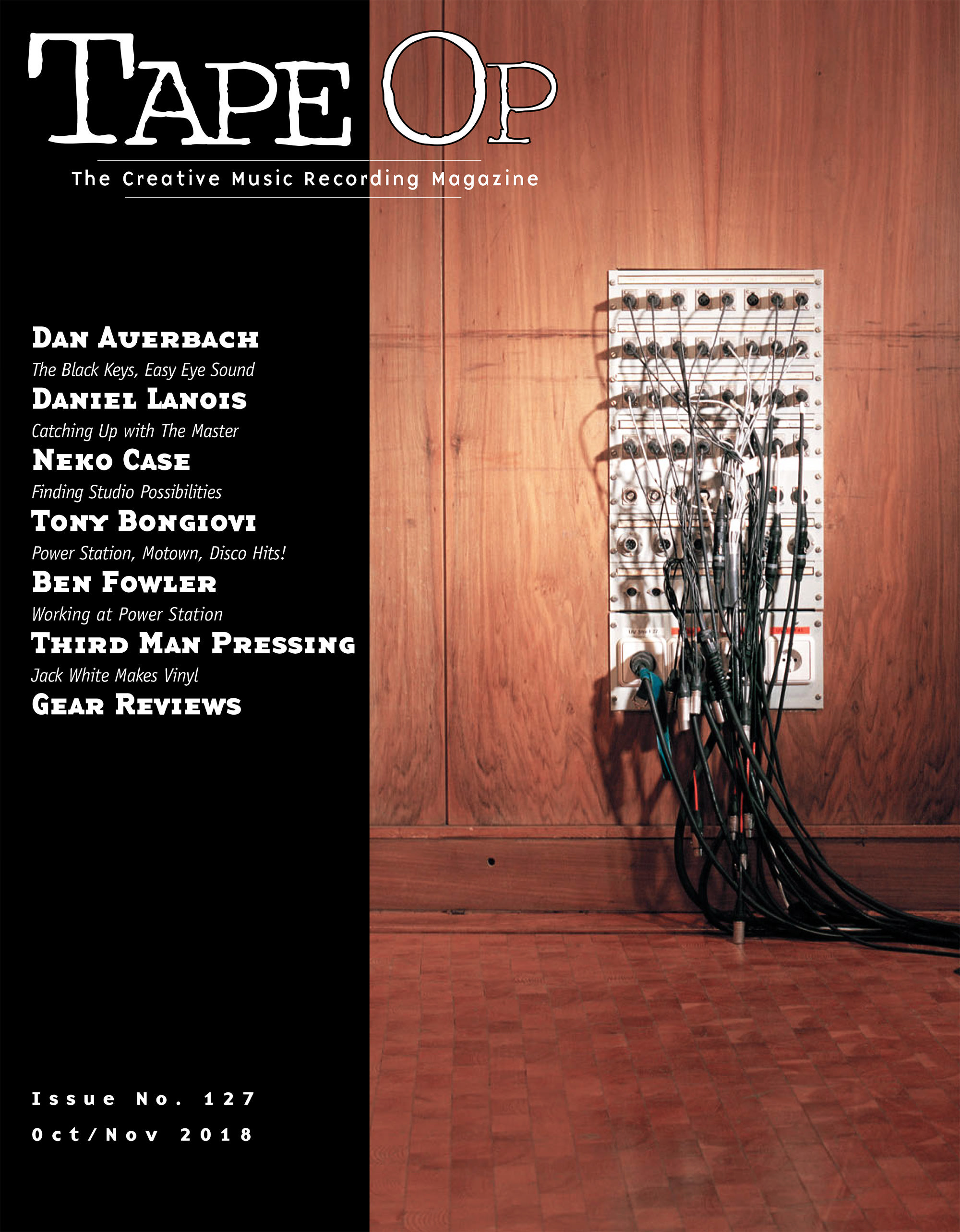 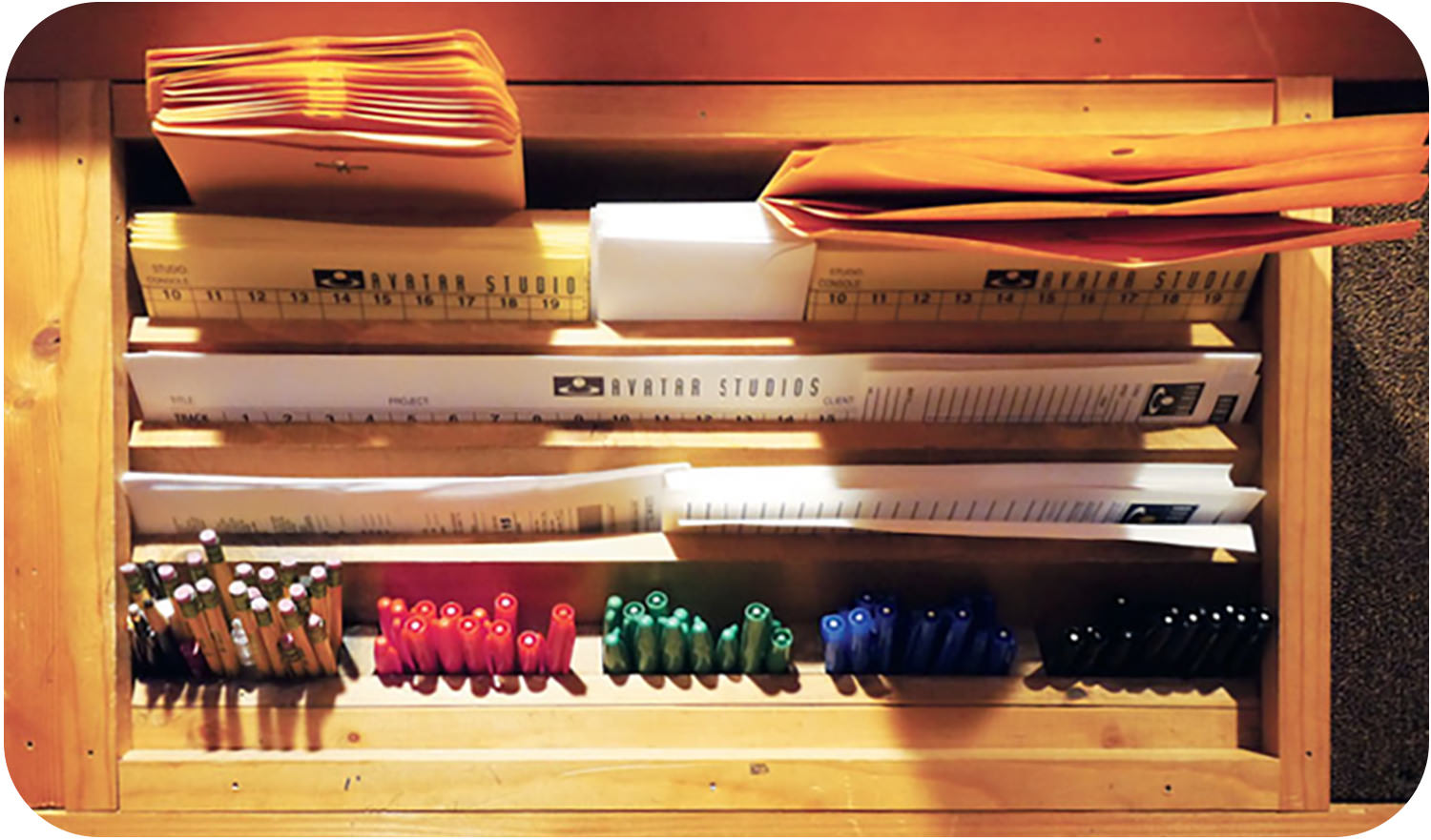 "Organising is what you do before you do something, so that when you do it, it is not all mixed up."
- A. A. Milne
Very organized writing utensil space at Power Station. See interview here.

Months ago, I was asked to produce a track for an artist who had previously done all of his own recordings himself. He sent me some tracks to overdub on, and I hired musicians and a vocalist to add parts under my guidance. When it came time to do a simple triangle overdub (it was a bossa nova styled tune) I grabbed two mics that had been used as drum overheads, and had the percussionist play in front of the stereo pair. When I sent off my first mix of the song, the artist noted, "I really enjoyed the movement of the muted triangle. It drew my attention in different directions, whether it was panned or not, which was enjoyable." I felt that he assumed there was some sort of intentional, or automated, panning going on, when all that was happening was the percussionist leaning slightly left or right as he played.

With the proliferation of plug-ins, online tutorials of processing overkill, and in-the-box everything, people sometimes forget that the simplest act – like recording percussion in front of a stereo mic – can create so much interest, and captivate the listener.

Many times it pays to remember that simple techniques often work best, and have the most impact. 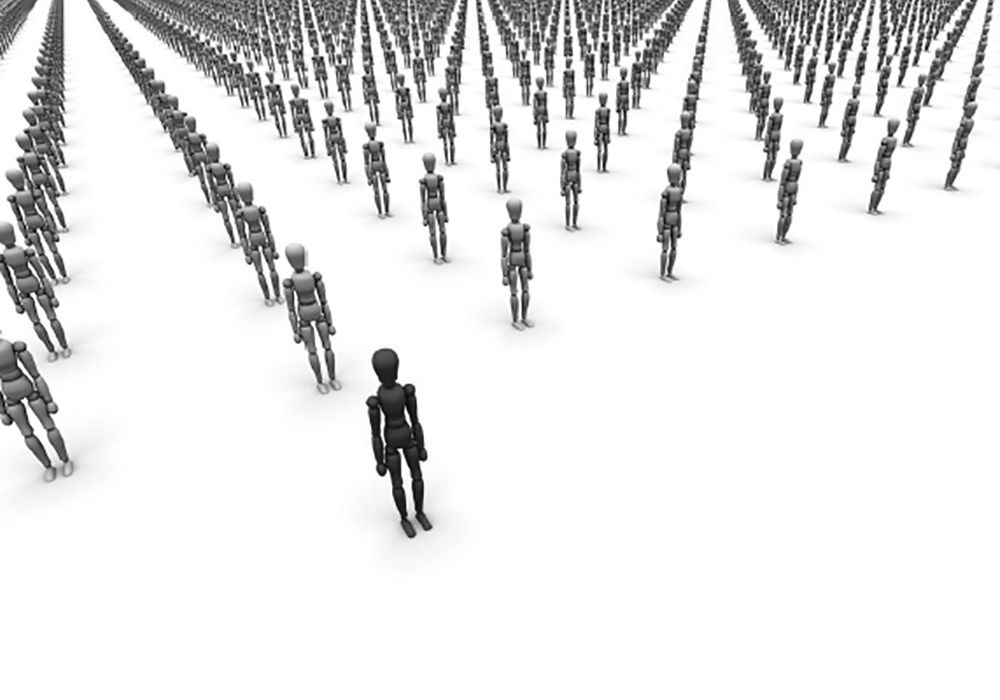 I'm worried about the current state of how people are learning recording. When I first started tracking myself (and others) out of my home studio, learning how to record on a budget was a difficult...

I recently received a product for review that included a USB cable in the box. The cable worked for charging, but it would not pass data. That got me thinking. Before there were standards for...

I'd like to suggest that this review be considered chapter five in a series of reviews I've written called Digital Synthesis: A Collection of Software Synthesizer Reviews [Tape Op #118]. In those...

In issue #121 of Tape Op, I wrote a review of Borderlands and GrainSpace, both pieces of software that use granular synthesis. I would suggest you read that review if you're not familiar with granular...

I am very picky about piano sounds, and, in general, my rule is that only real pianos sound like a piano should – so I don't like to use sampled or modeled pianos if at all possible. I've gone...

For a long time, I’ve been a fan of the iPad and iOS for electronic music performance. I love the 2D interface of the iPad touch screen, and I like that the iPad is a separate instrument (as...

by Yamaha  |  reviewed by Alan Tubbs

About 40 years ago I purchased monitors for a home studio before such things were common. I still use those Yamaha NS-500s and matching amp in my home studio. Now, I can't promise your Montage will...

by Eventide  |  reviewed by Dana Gumbiner

For me, a massive highlight from a recent trip to Berlin, Germany, was a visit to the legendary Hansa Tonstudio [Tape Op #95], where the majority of David Bowie's Low and Heroes albums were tracked...

by The X Clip  |  reviewed by Larry Crane

Today we're going to look at products that allow you to add a second microphone to a mic that's already mounted on a mic clip and stand. Why would you need this? Maybe you are double mic'ing an...

by Waves  |  reviewed by Scott McDowell

With the Scheps Omni Channel, Waves has delivered a next generation channel strip that plays to its unique strengths in the best way possible. Over the last few years I've really embraced channel...

by Hafler  |  reviewed by Tom Fine

As Canada's Radial Engineering continues to revive the Hafler brand (acquired in 2014 from Rockford Corporation), its latest move is into power amplifiers. First out of the gate is a revival of...

I've been in the music industry for several decades– and writing for Tape Op for a significant portion of that time. Along the way, I've met countless manufacturers, as well as their hired...

Following the success of the Alpha Series line of acoustic treatments, GIK has released their Impression Series. These panel absorber/diffusors are available in six designs: Gatsby Arches, Digiwave,...

by Oeksound  |  reviewed by Scott Evans

I think I first heard about Soothe from mastering engineer Brad Boatright. "Just try it!" I did, and a day later I bought it. Note: never demo a plug-in you're not ready to buy. Soothe is a "dynamic...

In audio, we're lucky to have a handful of obsessive experts on specific, niche topics; Stewart Tavener is one of these people. I first met Stewart five years ago while shopping for a stereo ribbon...

by Decibullz  |  reviewed by Larry Crane

Hearing protection is incredibly important for everyone, but when you make your living producing and mixing you get totally paranoid about it. I've been on an endless quest for comfortable,...

DPA microphones are a Danish company that has been making high-quality microphones for studio, stage, and broadcast applications since 1992. A newer product from the company, called the d:vice MMA-A,...

Not long after I finally made the plunge into acquiring a 500 Series rack and some modules, I noticed audible noise coming through some of the mic preamps in my rack. I deduced right away that the...

by beyerdynamic  |  reviewed by Tom Fine

A couple of years ago beyerdynamic debuted the latest versions of their top dynamic studio headphones. The DT 1770 PRO closed-back and DT 1990 PRO open-back versions feature what beyerdynamic calls...

Longtime readers with amazing memories may recall my review of WaveLab 6 [Tape Op #62]. I was already a veteran user of this mastering suite at that point, and back then I said, "Writing about WaveLab...

by Yamaha  |  reviewed by Harris Thurmond

As a guy who spends a lot of time recording, traveling on airplanes, and occupying open floor plan office spaces that many tech companies favor these days, I use headphones a lot – and being an...

by Lynx  |  reviewed by Geoff Stanfield

Good digital conversion has come a long way in a relatively short time. There are now so many great options, ranging from streamlined 2-channel desktop interfaces and modular systems all the way up to...

by FabFilter  |  reviewed by Garrett Haines

by ART  |  reviewed by Adam Kagan

During the past few years, many manufacturers have introduced innovations in speaker design that include technology and composite materials developed for the aerospace industry and interesting designs...

I love stompboxes as much as the next studio rat, but if we reviewed all of them there'd be no room for the other swell recording gear we chat about in Tape Op. But when respected pedal builder Union...

by Apogee  |  reviewed by Dana Gumbiner

Studio-quality; rugged; super-portable; easy to use across multiple platforms – it's nice to find a microphone that checks all of those boxes. I was a fan of the original Apogee MiC, and this...

by API  |  reviewed by Pete Weiss

Designed around the celebrated 2520 discrete op-amp that has kept Automated Processes Inc. gear in hot demand since the early '70s, the legendary company's new "channel-strip-in-a-pedal" series...

When I first opened the box to take a look at the 1073 SPX, I immediately saw a lot of familiar knobs that represented the exact same functions as those on any of my vintage Neve 1073s – or even...

by AEA  |  reviewed by Joseph Branciforte

With its unmistakable visual presence, enormous versatility, and famously silky smooth top end, the original RCA Type 44 (continuously produced from 1932 to 1955) has secured its place as one of the...