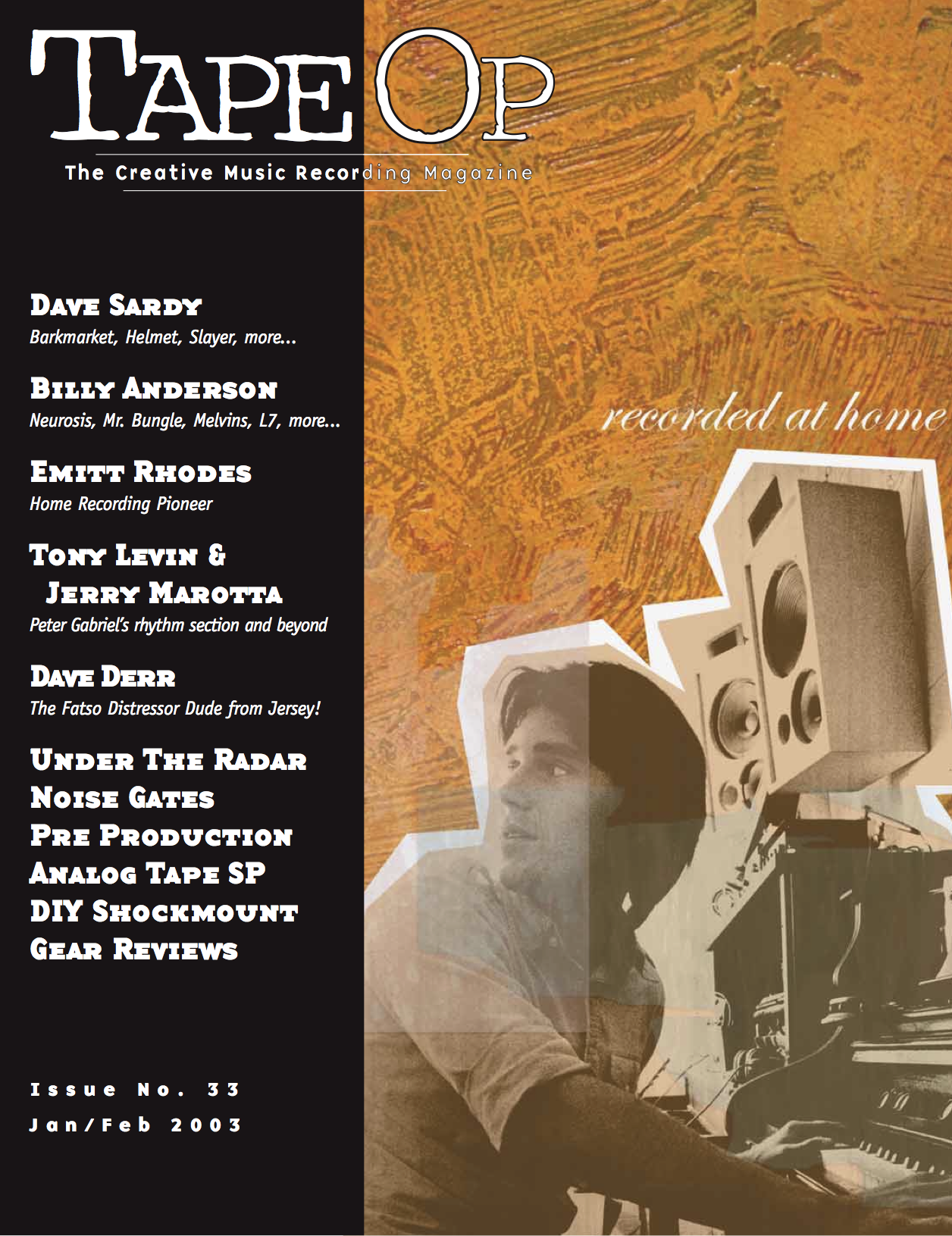 Well, the results are in. After my asking about the ratio of reviews to interviews last issue, I'd have to say a vast majority of our readers would like us to keep the reviews section at the length it has been in the past, unlike issue #32 which had an unusually large amount. It's also given us a glimpse into how our readers use Tape Op. Many folks pointed out that they like the interviews because that is where they get tips, tricks and ideas to apply to their own recording sessions, and that they feel inspired by the people we talk to. Readers seem split on what they'd like to see us run reviews of. Some people want more coverage of older, esoteric gear. A few wanted us to only focus on new, inexpensive gear which anyone could afford. One mentioned that the "high-priced" reviews gave them gear to strive for. Others were worried that if we reviewed more older gear we'd drive up the price of such items. We're planning to keep moving ahead, with a mix of "high-ticket" and affordable new gear, some older curiosities, and occasional items (like the books and CD-R pen this issue) that can help educate us or make our jobs easier. Andy Hong is doing a great job as our resident "gear geek" reviews editor, and has many surprises in store for us down the road, but don't expect to see the reviews section "take over" Tape Op - we'll always have plenty of interviews with interesting, creative folks, and I'm working on more articles that cover subjects relevant to our readership. Don't forget to also mark your calendar and purchase your entry to the upcoming Tape Op Conference, May 30th, here in my hometown of Portland. Check www.tapeopcon.com for details.

PS. If you're wondering where our interview with Mixerman is, hold tight as it should be in the next issue. He's a hard man to track down!

Dave Sardy is a rare bird in the world of rock production: A virtuoso on both sides of the glass. As the leader and producer of the groundbreaking New York post- hardcore trio Barkmarket, he mined not...

Though Emitt wrote the songs, played every note, and acted as his own engineer and producer, when mixing time rolled around the tapes were whisked away to Sound City where the team of Keith Olsen and...

In many a studio the Empirical Labs Distressor is as much a common sight — and sound — as a guitar amp or coffee machine. And for good reason — it works well, it's highly tweakable,...

Here's a ridiculously cheap and simple way to make a pretty nice microphone shock mount. Cost is under 10 bucks (way under if you build more than one) and it shouldn't take too much more than a half...

I was working on a two-week session for the upcoming fifth Richmond Fontaine album in November, engineering with J.D. Foster producing. One of the first things that J.D. did when we arrived at the...

by Langevin  |  reviewed by Ian Swanke

Langevin was a manufacturer of consoles in the 1960s. Manley Labs has since purchased the name, and although they base some of their solid-state designs on the original Langevin topology, the original...

by Speck  |  reviewed by Eric Tischler

When I caught wind that Speck was working on a single-channel mic preamp, I was excited. I'm a big fan of Speck's reasonably-priced ASC parametric EQ. So I extrapolated and figured a Speck mic pre...

In my opinion there are very few mic preamps under $800 per channel that are any better sounding than an inexpensive console. Many of the "budget" mic pres are based on simple, cheap integrated...

Right from the start, I noticed that the Old School Audio MP1-A ($499) has an extended, "airy" top and sounds flat and accurate in the low end with very little coloration. Compared to the other two...

by TC Works  |  reviewed by Will Bailey

What a luxury TC Works, a TC Electronic sister company, has bestowed us native platform users. TC Works introduced the PowerCore several years ago and if you haven't had a chance experience the power...

Client storage is increasingly an issue as more and more recording projects and studios move into the digital domain. Most of the smaller budget studios I've worked with seem to send their clients to...

by Sonomic  |  reviewed by David Huber

Whether you're an electronic musician who's searching for the right set of sounds to load into your software sampler or an analog bloke who's desperately in need of Amazonian crickets to lay into a...

by APC  |  reviewed by Andy Hong

Why do you need an Uninterruptible Power Supply? Here's a scenario. You've just hit record. The hard disk is spinning as it writes the track. The power suddenly goes out. The write-head on the hard...

by Benchmark  |  reviewed by Jeff Lipton

D/A converters are often an afterthought in many project studios, but high quality converters are essential for both accurate monitoring and analog processing. Converter quality can be assessed most...

by HHB  |  reviewed by Larry Crane

In Issue #30 I mentioned using "safe" ink pens when marking CD-Rs. The supposed issue is that Sharpies and their ilk can bleed through the plastic layer and eat away at the aluminum below, thus...

by Swissonic  |  reviewed by John Baccigaluppi

There are many reasons to need another eight channels of digital conversion, but the most common is if you have a Digi 001 or 002. You really need an ADAT Litepipe compatible converter to maximize...

by Audioease  |  reviewed by John Baccigaluppi

See Issue #28 for my full review of Altiverb for MAS, a plug-in that I would consider the best software reverb I've heard. Well now it's available for RTAS and VST as well as MAS. You can check...

by Lucid  |  reviewed by John Baccigaluppi

I have been wanting to audition a master clock for sometime now and finally had both the opportunity and reason to do so. November was a busy month at my studio with mostly digital sessions, giving us...

See Issue #30 for my review of the Mbox as most of my comments there on small to mid-sized studios needing Pro Tools compatibility also apply here. You've probably seen the ads and know that the Digi...

I'm a bag geek. Bags make up a big part of my lifestyle. When I'm in town, I commute by bike with a courier bag. When I'm on the road, I commute by plane with a carry-on bag. I'm also a gear geek, so...

I saw (and heard) a bunch of gear at the annual AES show this past Fall. With so many cool new products to discover, you'd think that it'd be hard for a gear geek like me to choose one product that...

The Cornford Harlequin is a hand-wired, 6-Watt "recording amplifier" with a stripped-down design that utilizes two 12AX7s, a single EL84, and a sparse control panel (Pre-amp Volume, Treble, Bass,...

Ribbon mics are all the rage these days and deservedly so. With their sharp detail and warm, accurate sound reproduction, ribbons have become the new flavor-of-the-month in the audio world, especially...

by Audio-Technica  |  reviewed by Scott Craggs

If you read my review of the Shure KSM 141's last issue, you know that I rarely spend my own money on mics. Instead, I rely on the kindness of others for most of my transducing needs. The AT4050 is...

IBP stands for "In Between Phase." In other words, this box provides you with a continuously variable phase knob-as opposed to a fixed on/off 180-degree phase switch-allowing you to combine signals...

I'd been having problems with drummers and headphones for years. The headphones would fall off drummer's heads, they would bleed too much click track into the mics, and their output wouldn't be loud...

I first heard this two-channel preamp from New Zealand's Buzz Audio on 3D Audio's 3D Pre CD. Compared to other "clean" pres on the CD, the MA 2.2 sounded more real on the takes of male vocal mic'ed...

I Am Trying To Break Your Heart

by Wilco | reviewed by John Baccigaluppi

OK, so this isn't a CD, but rather a documentary film about making a CD, this year's excellent Yankee Hotel Foxtrot by Chicago's Wilco. About a third of the film is studio scenes in the band's loft...

by Ivy | reviewed by Larry Crane

What do bands do for fun in between albums? A collection of cover songs! Tunes by artists like The Cure, Papas Fritas, Steely Dan (!), Serge Gainsbourg, The Go- Betweens (my favorite) get the breezy...

Maybe out of respect to the dead, Jeff Lynne doesn't overproduce this posthumous release by the deceased Beatle. There's a sort of loose, low- key quality to these songs that lends a bit of mellowness...

by The Sea and Cake | reviewed by Larry Crane

I totally respect John McEntire, and have really enjoyed some of the records he's produced, but man is this one tight, controlled digitally- worked record. It feels like everything was labored over...

by Minus The Bear | reviewed by Larry Crane

I dropped by Avast! Recording Co. in Seattle looking for Stuart Hallerman (who wasn't there) but Troy Tietjen was hanging out in the office. He mentioned that Steve Fisk was mixing a record, so I...

by The Microphones | reviewed by Larry Crane

Phil Elvrum, of Olympia, WA, was profiled in last issue and is also the force behind The Microphones. Mount Eerie is his strange new record he made at K Record's Dub Narcotic studio. It's like a...

I wish people would name their records after my studio! Doug's soft songs were captured well at Portland's Type Foundry, with local musicians brought in to back him up. This is #1 in a series, and I...

Shimmering, lumbering, beautiful music from these Icelandic boys, recorded at Alafoss, their studio built in an indoor swimming pool that they bought. This was recorded on Soundscape, and mixed at...

The Museum of Me

Chris Butler, long-time Tape Op reader and formerly of The Waitresses, is a man after our hearts. Recording here was done on Studer J-37 4-track, Ampex A300 mono deck, Neumann VMS62 Special Lathe,...