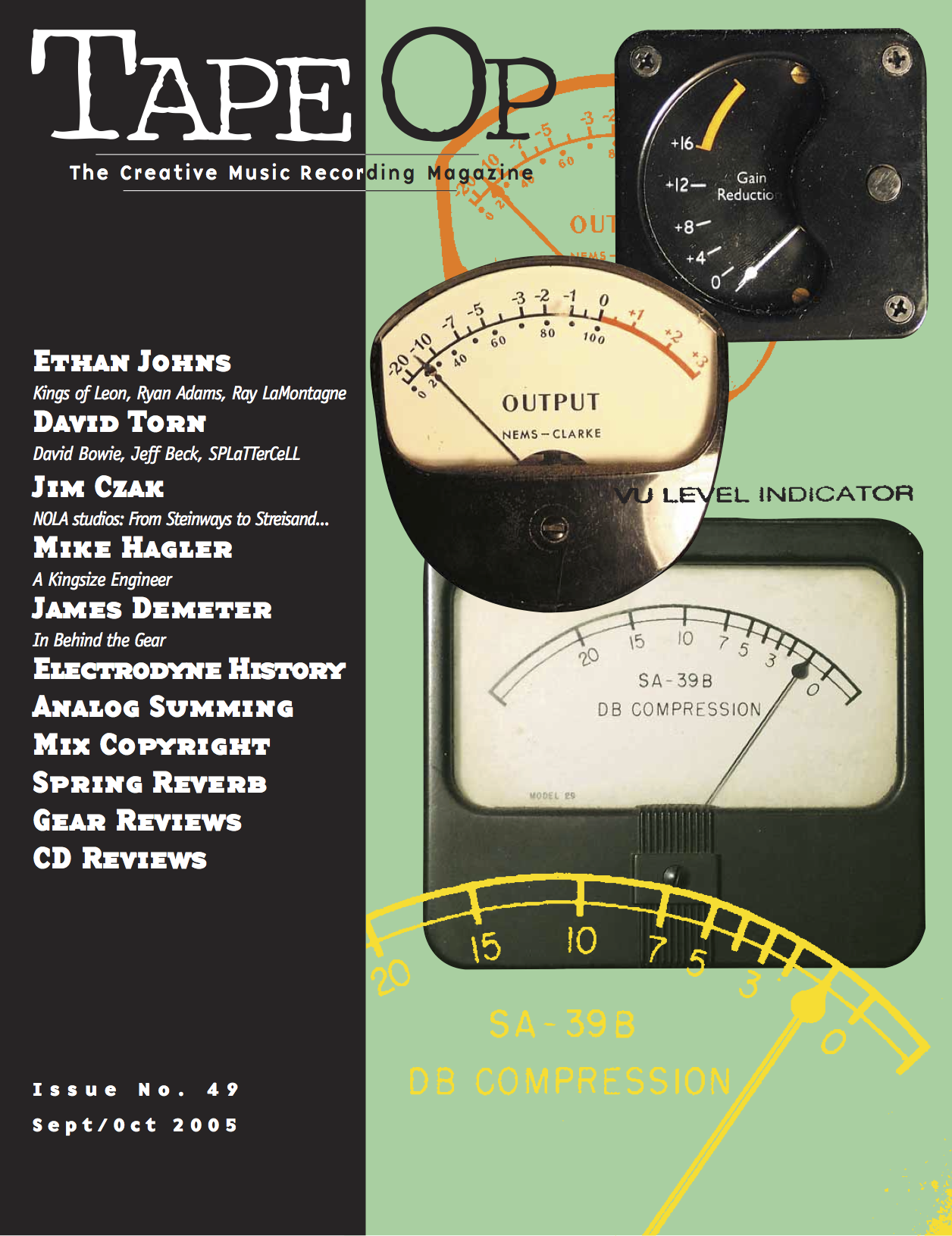 As we go to press (actually this issue is already at pre-press) hurricane Katrina has battered the coastlines of Louisiana and Mississippi and caused massive flooding and destruction to the city of New Orleans. For the last two years we've hosted the TapeOpCon in this city, making many friends in the area in the recording and music scenes. New Orleans is one of America's unique cities, one of the birthplaces of jazz and rock and roll and a cultural center of unique art, food and a different lifestyle from the rest of this increasingly homogenized country. At this point we've heard from our friends at Piety Street Recording that they are all safe in other cities waiting to return to survey the damage, we've heard our pal Andrew Gilchrest is okay, and conference event planner Jon Kardon is staying at his sister's home. But many of our friends are unaccounted for at this point — Sara and the Big Blue Marble band, Chris and Daniel from the Living Room Studio and many other studio owners and musicians. We worry and wait.

I'd never been to New Orleans until three years ago planning for TapeOpCon. Since then this city has become very special to me and close to my heart. All of us at Tape Op are concerned and offer our support in returning this city to life.

Many people have contacted me asking where to donate. Please visit the Red Cross — they have donation systems in place and are equipped to help. www.redcross.org As of this time we have no idea what we will be doing for TapeOpCon in June 2006. At times the art and commerce of recording music seems so secondary to caring for friends and the rest of humanity. All our love and support goes out to the residents of Louisiana and Mississippi impacted by hurricane Katrina.

PS: August 2005 saw the passing of two of our greatest sonic pioneers, John Loder and Bob Moog. John Loder, the founder of Southern Records and Southern Studios who engineered and mastered some of the most important independent recordings of the last three decades, died of complications that arose from a brain tumor on August 13th in London. Bob Moog, inventor of the Moog synthesizer and champion of the Theremin, died of brain cancer at his home in Ashville, North Carolina on August 21. Both were true innovators who inspired a generation of musicians and engineers, and both will be missed dearly. -Geoff Farina

Ethan Johns would be of note to the recording world if only for his familial ties. Being the son of Glyn Johns and the nephew of Andy Johns, one might assume his entry into studio work was a...

David Torn is a tough man to pin down — literally and figuratively. One day he's in his upstate New York project studio as a solo artist/avant- guitarist working on the follow-up to his latest...

Plate reverbs, with their large tensioned metal plate and transducers, were one of the first electronic ambience simulators used in the recording studio. A variation on the plate reverb concept is the...

Things to Do in the Studio

"I read Tape Op because it talks about music and recording from what, in my mind, is the 'correct' angle — the artistic one. A common theme in this magazine is paying clients doing or saying...

Ever since M-Audio was purchased by Avid, the parent company of Digidesign, the industry speculated on whether or not Pro Tools would run on M-Audio interfaces. M-Audio has long enjoyed a reputation...

The four-channel, Class-A, solid-state 4110 is Universal Audio's first mic preamp that is not derived from earlier classic designs. The 3RU-height device is simple to use and smart looking. It is...

Sound the trumpets; Universal Audio has done it again! With the reissue of the LA-3A, UA has brought back one of the best, solid-state, optical compressors ever built. Originally designed as a...

by Neumann/Gefell  |  reviewed by John Baccigaluppi

When I was close to finishing this review, I began to realize that it's not only just scraping the tip of an iceberg, but it's bound to open a can of worms, and many people will disagree with at least...

Free VST plug-ins for Windows Like a lot of people who read this magazine, I'm a hardware guy, and I've resisted using computers to make my music for a long time. But I recently realized that you...

Here's another "double" review of a monitoring system-this one orchestrated by F. Reid Shippen. The first viewpoint is from Reid, who many of you have met at the last three TapeOpCons. He was a mixer...

Empirical Labs is a company that seems content to offer a few outstanding pieces of gear rather than a wide array of average products. You won't see them rushing to push out new devices every six...

The discontinued AT4031 was an early microphone in Audio-Technica's extremely popular 40 Series. It is a small- diaphragm, end-firing microphone that was eventually replaced by the AT4041. It is...

A rack mixer wasn't initially on the Chandler design agenda, but designer Wade Goecke ("Behind the Gear," Tape Op # 46) got so many calls saying, "There are a lot of summing boxes out there, but I...

by Remo  |  reviewed by Mike Caffrey

$25 bucks to a better snare sound right this way... A couple of months ago, I produced an album with Omar Hakim on drums, and he turned me on to the Remo Active Snare Dampening System. In most cases,...

For years, David Marquette cultivated a reputation for elegantly racking and powering Neve, Telefunken, and other desirable vintage modules. He eventually decided to branch out and produce his own...

by Ableton  |  reviewed by Chachi Jones

Long held as an irreplaceable tool for electronic musicians to compose and perform their music, Ableton Live is increasingly gaining favor with the rest of the music world. As one of many professional...

I haven't had this much fun with audio software in a long time. Imagine an application window that displays a graphic representation of a computer keyboard. Onto each key you can drag-and-drop any...

I wrote a pretty positive review of the Wunder Audio PEQ1 preamp/EQ in Tape Op #41. At that time, the unit was available as either a replacement module for some vintage consoles or in a custom rack...

by TUBE-TECH  |  reviewed by Adam Kagan

We live in a DAW world, and that world provides us with ultimate recall and almost-infinite processing choices via hundreds of plug-ins. But we still want more! Now we crave the artifacts, coloration,...

by Earthworks  |  reviewed by Andy Hong

I've been a believer in Earthworks microphones ever since I got my first pair of TC30K omni condensers. Since then, I've added a bunch of Earthworks SR69 and SR68 cardioid condensers to my cabinet....

I hate how the Mac G5 is too big to mount in a 19'' rack sideways unless you cut off its handles. And no one seems to make a rackmount case that you can fill with the parts of a gutted G5 like you can...

by Audio-Technica  |  reviewed by Garrett Haines

With inexpensive mics seemingly as common as guitar picks, one must ask, "Does the world need another cheap mic?" But after testing the AT2020, my answer is a resounding, "Yes!" Because the AT2020 is...

The Pacifica by A-Designs is a two-channel, solid-state, transformer-balanced mic preamp. Its front panel is simple-each channel has a DI input, phantom-power switch, 20 dB pad, polarity switch, and a...

by Elektron  |  reviewed by Inverse Room

Drum machines get a bad rap. And why not? Much of what comes out of them is sterile, repetitive, and mechanistic. In some cases, it's the machine's fault. Most of them aren't very versatile, pumping...