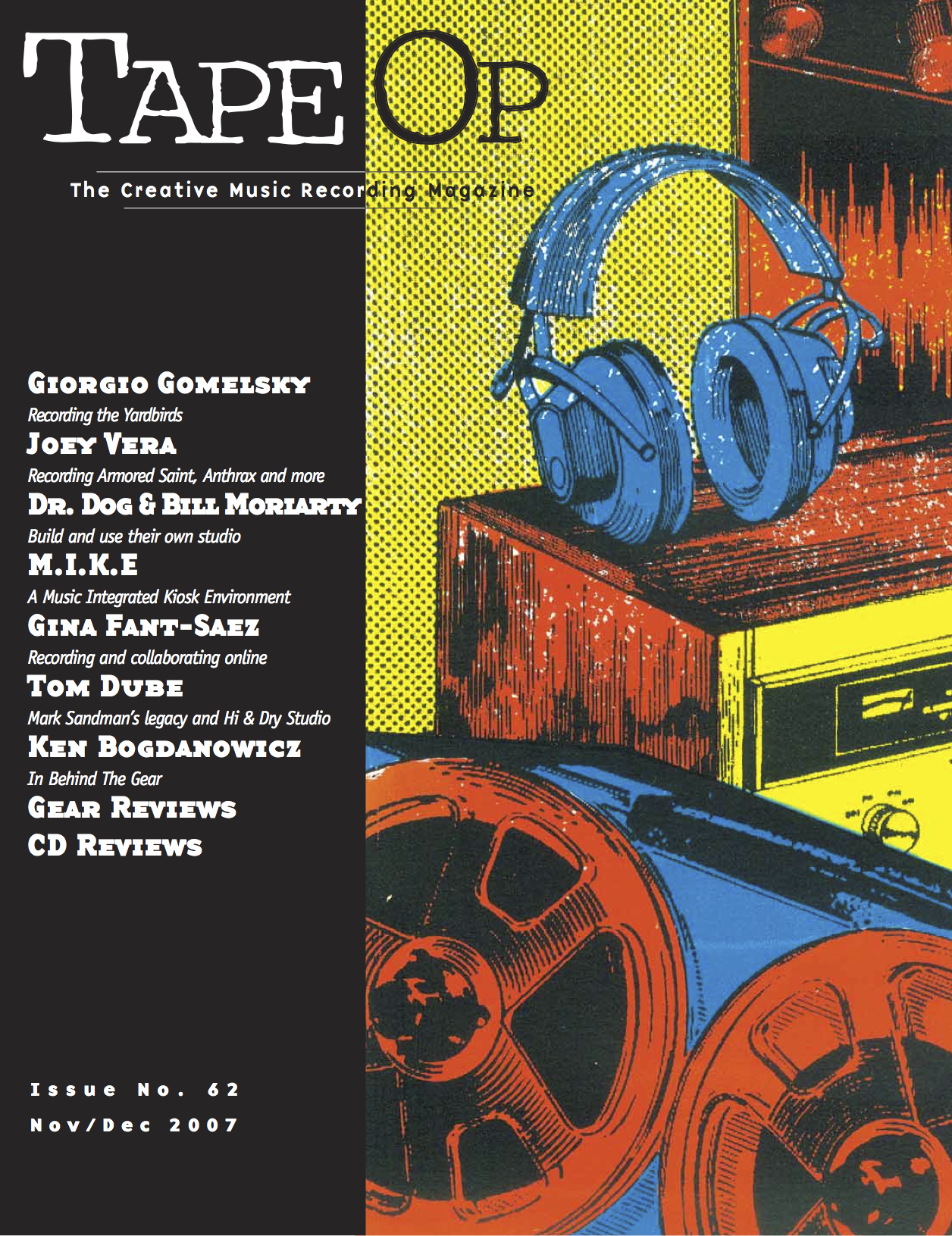 By the time you read this I will be in the middle of my first album-tracking sessions in a long time. Over the last year I was dealing with selling my home, AES SF, working on Elliott Smith's New Moon release, moving to Arizona, NAMM show, renovating our new home, moving Jackpot! to its new location (over four months), AES Europe, the final TapeOpCon and attempting to catch up on work for this magazine. All this took over a year out of my recording time. To be honest, I have had Pro Tools open a lot for archive work I'm doing for Elliott's estate, and I did record two Death Cab For Cutie concerts in December 2006 (nerve wracking but fun). But I haven't had any album tracking sessions since September 16, 2006. Ironically these sessions in the old Jackpot! location were for an album by my friend Chris Tsefalas, who was also one of the first "clients" to work at my home studio, Laundry Rules in 1995 or so. These sessions led directly into mixing New Moon. Elliott Smith had helped me put Jackpot! together, and here I was working on his tracks, some of which he had actually recorded here by himself ten years before. It felt like a full circle of some sort had occurred.

Now I'm finally able to utilize my new studio space in Portland, and I'm excited to see how all the improvements and concepts I applied to the layout of this place work. It's a new era in my life: I'm living 1,548 miles from Jackpot!, Tape Op takes up more time than it ever has, the magazine has branched into the UK and EU and I'm starting to assemble a home studio in Arizona. Now that's really full circle...

Next issue I'll have some thoughts about what worked and what could be different in the new Jackpot! Hopefully there will be some good advice for others to heed!

Where do recordists build their studios? Bedrooms? Garages? Basements? Attics? All of the above, of course. The luckiest ones, however, are able to find a dedicated space — and, Lord willing,...

I first met Gina Fant-Saez at an AES show where she was showing her new Internet-based start-up company called eSession.com. eSession has been in development since winter of 2004 and went into public...

Tom Dube wears a lot of different hats. He has worked as a producer, engineer, mixer, tour manager, videographer, photographer and nanny. Tom has produced, co-produced and engineered records by Catie...

I recently got two letters. The first one is from a good client (and nice guy) with whom I've done several album sessions in the past. The second is from a new reader in Scotland. I wanted to try and...

by Eventide  |  reviewed by Pete Weiss

When I heard that Eventide was branching out into the world of stompboxes, I was psyched. Several versions of the stalwart H3000 have graced my racks over the years, and I'm still the happy owner/user...

by SoundToys  |  reviewed by Walt Szalva

The SoundToys suite of plug-ins was developed by a crew of ex-Eventide gurus headed up by Ken Bogdanowicz. [See interview on previous page.] Ken and the gang have been developing plug-ins for years...

Violet Design is a relatively new boutique microphone manufacturer founded by Juris Zarins, part owner of a facility that once manufactured mics for BLUE. Violet's microphones are all hand made and...

by M-Audio  |  reviewed by Dana Gumbiner

Here's a pair of excellent nearfields from M-Audio. The EX66 is an MTM, or midrange-tweeter-midrange active monitor, with a 1" titanium driver centered between two 6" midrange/bass drivers....

I'll admit, it took me a while to grok the UA DCS Remote Preamp. On paper, it didn't strike me as a piece of gear which fulfilled a specific need in my studio. In practice, however-totally different...

by Zerotronics  |  reviewed by Andy Hong

Last year I reviewed the CoolSprings passive spring reverb unit by Zerotronics (Tape Op #55). Not only did I love the smooth, analog reverb sounds, I also admired the efficient design (the unit is...

Tony Visconti: The Autobiography: Bowie, Bolan and the Brooklyn Boy

The Josephson Engineering C700A doesn't look like any mic you've seen before, and that's a good thing because, psychologically, you'll be expecting something new, and I promise, you won't be...

When the request went out for a review on the Blue Sky Big Blue speaker system, I figured what the hell. I've been toying around with the idea of stepping up to a larger pair of speakers for some time...

by API  |  reviewed by Eric Tischler

For this review, I asked two of our contributing writers to send me their thoughts on the API A2D. First up is Joel Hamilton, whom many of you know from his popular appearances at TapeOpCon and his...

Despite recent advances in virtual and synthesized instruments, nothing has the same sound and feel as a real piano, cello, violin, or brass section. Those with experience recording these types of...

by Apogee Electronics  |  reviewed by

Apogee's all-in-one preamp, converter, and monitoring system offers all the essential features in a 1RU-height FireWire audio interface. There are eight analog inputs, four of which can handle mic,...

By now, most of you who have read this magazine know that at WaveLab, we love ribbon mics. We record a lot more acoustic instruments than electric at times, and ribbons are always employed for their...

by ART  |  reviewed by Joel Patterson

Jonathan Little, the man behind Little Labs, is one of my favorite persons on the planet. He is super sweet, has a great sense of humor, hosts awesome BBQs, and he looks and acts the part of a mad...

Seems like every time I get into a conversation about recording, it goes something like this. Me: "Blah blah room mics blah compressors blah." Them: "Yeah, cool! What program do you use-Pro Tools?"...

by Littlite  |  reviewed by Andy Hong

I'm sure many of you are familiar with Littlite gooseneck light systems, especially those of you doing live sound. Many sound reinforcement consoles, for example, have built-in jacks for plugging in...

One might say I've become somewhat of a connoisseur of Peluso microphones. I have several of their microphones. (See my reviews in Tape Op #44, #48, #56, and #59.) At this time, my favorite Peluso is...

The Weiss DNA1 is a 2RU-height audio restoration dynamo that performs several noise- reducing tasks via the DeClicker/DeCrackler and DeNoise modules, along with K-Stereo ambience recovery and M/S...

by Primera  |  reviewed by Andy Hong

As a co-owner of a small record label and several production facilities, I can understand why duplication facilities are losing business. Because of the popularity of online distribution for both...

by monome  |  reviewed by Josh Boughey

I came across monome in April, while trolling the web for information on step sequencers. I found myself drawn to the Spartan aesthetic of monome.org and the minimalist principles expressed there. And...

by Primacoustic  |  reviewed by Andy Hong

Every once in a while, an idea comes along that's so elegant in principle and brilliant in execution that when you experience it, you think, "Duh!" That's the Recoil Stabilizer. What it does is so...