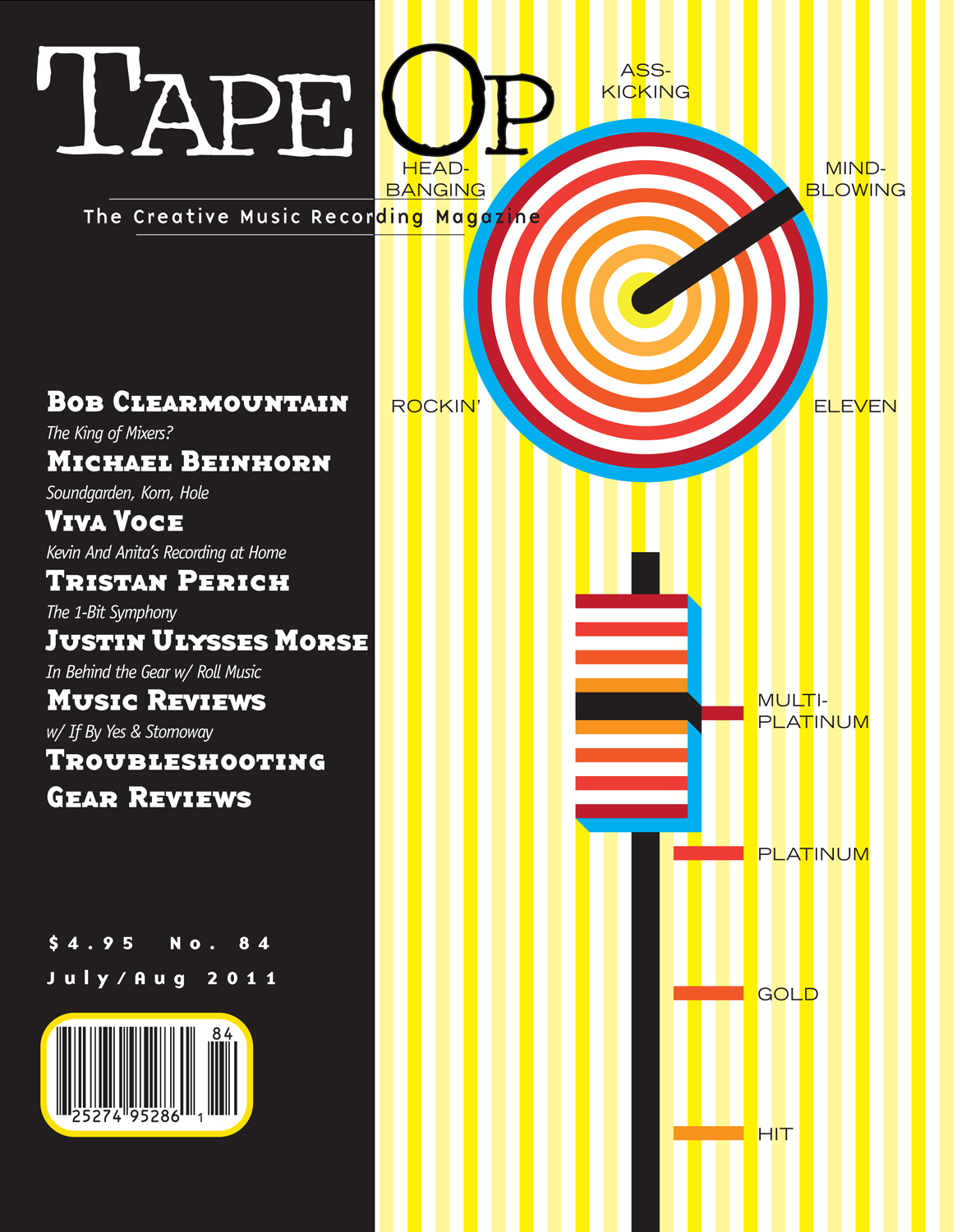 I was out at a club watching some bands play the other night, but in the back of my mind I was wondering what to write about for the intro of this issue. Then it hit me. I'd been telling some friends at the show what a pleasure working on a recent album was, as the musicians involved were really good players and it was fun to work on. I'd also been enjoying the show I was at as I marveled at the quality of the musicians onstage. I suddenly realized what I wanted to say.

Sometimes we forget how or why we ventured off into this world of music recording. For myself, this path began with my interest in electronics and sound. Eventually I became more of a musician, playing in bands and such; but, in my opinion, I never became a great musician. Getting to work with players that intuitively understand and support a song with their abilities is a treat. At times I've felt privy to the best "private performances" I'll ever see from my favorite artists. For a kid that grew up obsessing over music and albums, being able to help capture these moments while working with great musicians and songwriters is certainly its own reward. I feel lucky.

In the insane world of recording and record production, we occasionally stumble across someone whose work puts him or her at many important junctures in music history, yet their name remains unknown...

Teetering stacks of cassettes and CDs line every wall, occasionally broken up by whimsical relics, such as the bust of Elvis lamp and vintage board games. There are a lot of ideas that live in this...

Here's the scenario: You're reading an article in a magazine about the current state of the music business. You come across the inevitable part where the journalist talks about how empowered musicians...

If you are a budding studio owner or engineer, realize that at many points during your career, you will need to fix problems with wiring — be it a broken wire inside a guitar or a...

by Celemony  |  reviewed by Eli Crews

My relationship to pitch-correction software is complicated, as it probably is for many of our readers. On one hand, it’s just a tool, like any of the other behind-the-curtain, smoke-and-mirror...

by Rycote  |  reviewed by John Baccigaluppi

Shockmounts suck. Right after headphones, they are the bane of any studio owner’s existence. Every time I walk back into the studio, I find broken headphones and at least one shockmount that has...

by Miktek  |  reviewed by Adam Kagan

Miktek, located in Nashville, TN, is relatively new on the scene, but their microphones are making a big impression. The C7 is their large-diaphragm FET condenser mic, which is aimed at the very...

Joel Hamilton and Allen Farmelo each spent extended time working with the AnaMod AM670, a solid-state recreation of the Fairchild 670 Limiter, one of the most revered audio components ever produced....

by Avid  |  reviewed by John Baccigaluppi

Like it or not, Pro Tools is the closest thing to a standard in the world of DAWs; most every commercial studio needs to run Pro Tools, and if you’re working at a certain level, you need Pro...

Sometimes a very simple basic product that does a mundane but necessary function is a much more satisfying purchase than the latest compressor or plug-in that everybody’s raving...

Bock AudioSo many microphones... I once had a friend tell me, “Every mic, no matter what kind or what condition, will be better than every other mic on at least one thing. Your job is to figure...

by Waves  |  reviewed by Kirt Shearer

People used to find excitement in planning new gear additions for their racks. Now people get even more excited about acquiring new plug-ins for their computers. Strangely enough, the plug-ins that...

I love this mic. There - I did it. I didn't bury the lead under my normal lengthy preamble. In fact, I'm going to do the review backwards. The Advanced Audio CM-28 is an amazing deal. It provides...

There seems to be a new trend developing in audio converter design. Up until recently, engineers considered converters to be part of the digital or computer side of their rig as opposed to the...

by TASCAM  |  reviewed by John Baccigaluppi

Okay, since I’m complaining about shockmounts and headphones in this issue, I’m going to go all the way and complain about tuners. Every time I need to use our studio...

Praise for the original TS-1 (Tape Op #60) was generally universal across print journals and web discussion boards. What did Chameleon Labs do to improve this well-received device? The new TS-1 MK II...

WaveMachine LabsDrum replacement software can seem like so much digital voodoo, adding to the “Photoshop-ification” of music production, but really it’s just an extension of drum...

by Celemony  |  reviewed by Eli Crews

My relationship to pitch-correction software is complicated, as it probably is for many of our readers. On one hand, it’s just a tool, like any of the other behind-the-curtain, smoke-and-mirror...

by If By Yes | reviewed by

Sitting in a vegetarian café in her beloved, adopted East Village, Yuka Honda is more concerned about the recent catastrophes in her native Japan than promoting her record. It's understandable....

by Stornoway | reviewed by John Baccigaluppi

I first heard of this group when my friends Jules and Amber from Sea of Bees were asked to do the support slot for their US tour. So, I bought the album on iTunes and found myself liking it quite a...