I'm a big fan of the iPad for virtual instruments, especially soft-synths, and I use my iPad in the studio much more than instrument plug-ins within my DAW. I like the at-your-fingertips interface of the iPad, as well as the affordability and stability of the many great-sounding synths available for it. I also love the fact that you can pass it around the studio for people to play and audition sounds. I will often end up creating a MIDI track that sends to the iPad, but sometimes, I prefer tracking straight into my DAW using the iPad's headphone jack.

I had a Line 6 Mobile Keys 49 keyboard for my first-generation iPad, but that product has been discontinued, and it won't work with newer iPads that have Lightning ports. Until recently, I'd been using an IK Multimedia keyboard. I disliked its miniature keys, but I couldn't find any iOS-compatible keyboards with full- size keys to replace it. And then I saw the Xkey line while attending a NAMM show.

Xkey is a unique product in that it's not an exact emulation of the standard piano keyboard, but rather it's an evolution of that keyboard format aimed at modern, digital music-making. You might want to refer to photos on the CME website after reading the following explanation. The spacing and depth of Xkey's keys mirror those of a piano, but the height of each key is lower (meaning less travel too), and there are gaps between the keys. The white keys are about 1/8'' high, the black keys are about 1/8” higher, and the gaps are about 1/8'' too. At first, this scheme seemed like it would take some getting used to, but I felt like it would be better than the mini keys which I really dislike. In practice, once I started using my Xkey37 model, I found that my “I'm not really a great keyboardist” playing actually improved! I had some piano training many years ago, but I'm a half-ass keyboardist at best, and I will occasionally hit a bunk note here and there, requiring another take or editing of the MIDI track. But, with Xkey, I was surprised to find that I hit fewer bad notes! As a result, I've now been using my Xkey37 as my main MIDI controller more than my expensive MIDI controller with piano keys and fancy wood trim!

The look of Xkey is very Mac-like, as it uses the same brushed aluminum as a MacBook. Because of the lowered height of the keys, the entire unit is very compact, with its total height being about 5/8'.' The depth is only about 1/2'' deeper than the actual keys themselves. I opted for the larger three-octave Xkey37, but they also make the original, two-octave, 25-key Xkey, which should fit in any gig bag, backpack, or courier bag.

Xkey relies on a Micro-USB port for both connectivity and power, which is great if you're using it with a laptop. With an iPad, you need either a Lightning to USB cable (like the Apple Lightning to USB Camera Adapter), or the 30-pin USB adapter from the Apple iPad Camera Connection Kit — depending on your iPad model. When I initially connected my Xkey37 through my Camera Connection Kit adapter, there was not enough power from the iPad to power the Xkey37. But I bought an inexpensive Lightning to USB cable on eBay for $6, and the Xkey37 worked fine with that. I tested my Xkey37 with all my favorite iPad synths, like Animoog, SampleTank, WaveGenerator, iVCS3, and several Arturia ones, and it worked perfectly, with no discernible latency. Depending on the app and how it implements MIDI, it was plug and play on most of the apps, while the rest needed to “see” Xkey in some kind of MIDI setup screen. Xkey's velocity sensitivity and polyphonic aftertouch were very responsive and felt natural in the patches that responded to them. The drain on the iPad's battery seemed very minimal, almost unnoticeable.

Note that the larger Xkey37 model, in addition to its Micro-USB port, includes a proprietary Xport connector and a breakout cable, with 5-pin DIN for MIDI output and two 1/4'' cables for sustain and expression. CME also makes 25 and 37–key wireless Xkey Air Bluetooth versions. I did not test these, but latency is claimed to be only a tad higher than the wired versions. I should also note that Xkey not only works with macOS and iOS apps, but Windows and Android are also supported. (Xkey Air requires a WIDI BUD accessory for Windows and Android.) XKey Plus is a configuration app that is available for macOS, iOS, and Windows. It can change a whole bunch of internal settings, even allowing the velocity curve to be redrawn, and it updates the firmware as needed.

The only downside to Xkey is that it lacks wheels for pitch-bend and modulation, instead relying on switches for these functions. Depending on the patch you're playing, and how the patch and Xkey are set up, these buttons can work fine, but you just don't have the same expressiveness that you do with a dedicated wheel or lever. But, this feels like a very minor quibble for a keyboard that fits into any backpack and is USB bus powered.

If all my talk about Xkey's compactness has you thinking it might be kind of flimsy, you'd be wrong. This keyboard feels very solid and well- built, much more so than a lot of competitors' products. My only slight concern is for the long-term reliability of the Micro-USB sockets, but those are an industry standard outside of Apple-land, and a necessary evil in small form-factors. The upside is that no wall wart is needed!

Overall, I've gotta give kudos to CME for rethinking the portable MIDI controller and coming up with the best music keyboard for iOS that I've used to date. My other iOS-compatible keyboard is sadly destined for eBay. Minor issues with the pitch-bend and modulation switches aside, I don't think you'll find a better keyboard for the iPad. Moreover, the ease of accurately playing the low-profile keys makes Xkey a serious contender for your main MIDI keyboard controller too! 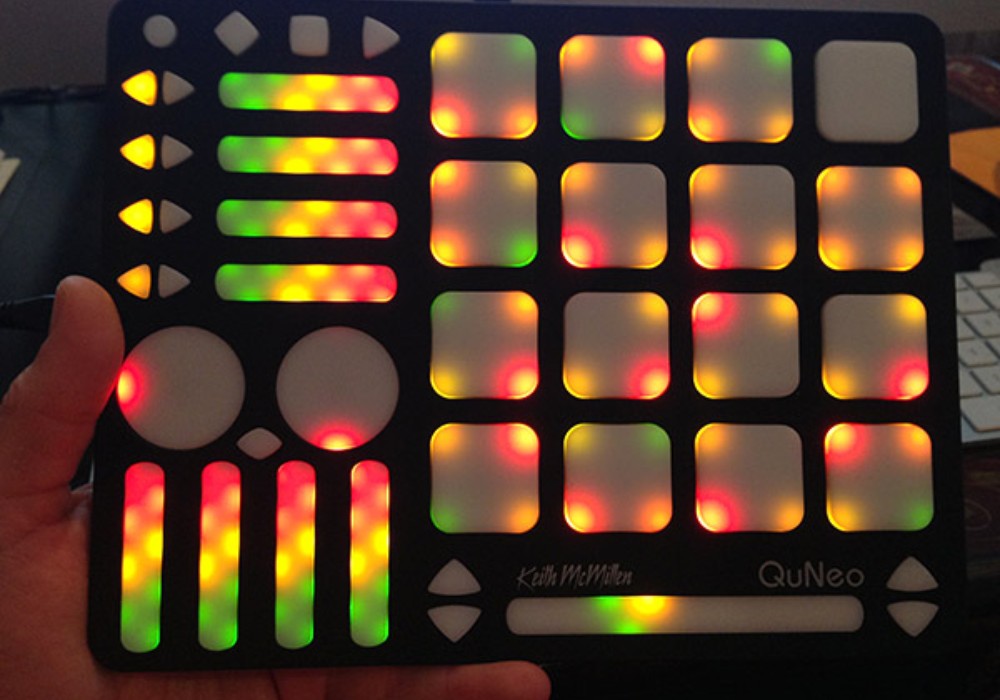 This is a future-proof controller that’s really more of a studio “director” or “headmaster-in-charge of all things bleepy-bloopy” – not your grandad’s MIDI...