When I received these mics I was shocked at their size. They are built right into standard XLR connectors with a small brass tube coming out of the end. All told, these things are about 3 1/2" inches long and weigh little more than a Sharpie. I'm told that the design was inspired by a Tape Op article a few years back and utilize the same Panasonic electret mic elements, but that the electronics were improved for higher SPL, wider frequency response and phantom power. First trial, I put a pair on a piano up against a pair of vintage AKG C-12s, all run through channels on a Neve 8068 at RPM studio in NY. What we found was that the Stapes sounded great on the piano. Warm, even, very nice clarity on the bottom end and a crisp, but not quite hyped top end. The omni pattern made for a full sound, with a nice stereo image, though not as much separation as you would have with cardioid. Second trial was as a room mic on a guitar track. We put one about four feet away from an AC30. Some mics can tend to thin out in this position, but I was blown away by the Stapes, getting the best sounding "distant" guitar tone I've gotten out of any mic. It sounded huge. Back home, I put the mics through the paces as overheads on drums. I had been using Audio- Technica ATM33s or CAD E-100s as overheads for years, and had been very happy with them. I popped up the Stapes and once again I was blown away. Straight through the pres in a Mackie 8-bus board, they sounded amazing. Great cymbal tone without being too sizzly, with a nice evenness in the stereo image. I like the sweetness of the top-end on these mics. They're modern and clear sounding, but without the harshness that I sometimes get with overheads. Maybe it's the omni pattern that has something to do with it as well. The drums sounded full and punchy (I try to use overheads for more "drum" tone, than just cymbals). I also love the size and lightness of these mics, as I don't need any special mic stand to put these up. A spring-loaded clip is the only special requirement. No drooping boom stands. You can stick these things almost anywhere. Next, I tried one as a close mic on a guitar amp, and another as a room mic. I already stated that it has become my favorite distant mic, but it also shined right on the speaker. I've been using condensers on guitar speakers more and more lately, and I found the Stapes to be great on crunchy guitar track. I kept the mic about a foot in front of the speaker, slightly off-axis and got a fat and punchy direct tone, with a nice crisp attack (through a solid state pre) with just enough "air" around the sound so that I didn't need the room mic. I am thoroughly impressed with these mics. The only complaints that I may have about them are that with higher gain settings on the preamp (like on a distant source), I found that they got a bit noisy. I also didn't have great luck using them as a vocal mic. I did like them for a three-part backup vocal, but as a lead vocal mic, I never got the sound I was after. The only other complaint is that I don't have more of them. (www.stapesaudio.com)

When Stephen Bright told me he wanted me to review a new microphone, I was excited. He's a pro audio dealer who always comes up with new, high-quality gear for me to try. But when I asked him what...

Okay, let me be as clear and concise as possible: the Telefunken AR-51 is the best condenser microphone I’ve ever tested for this mag (and I’ve tested a few). This mic utilizes circuit... 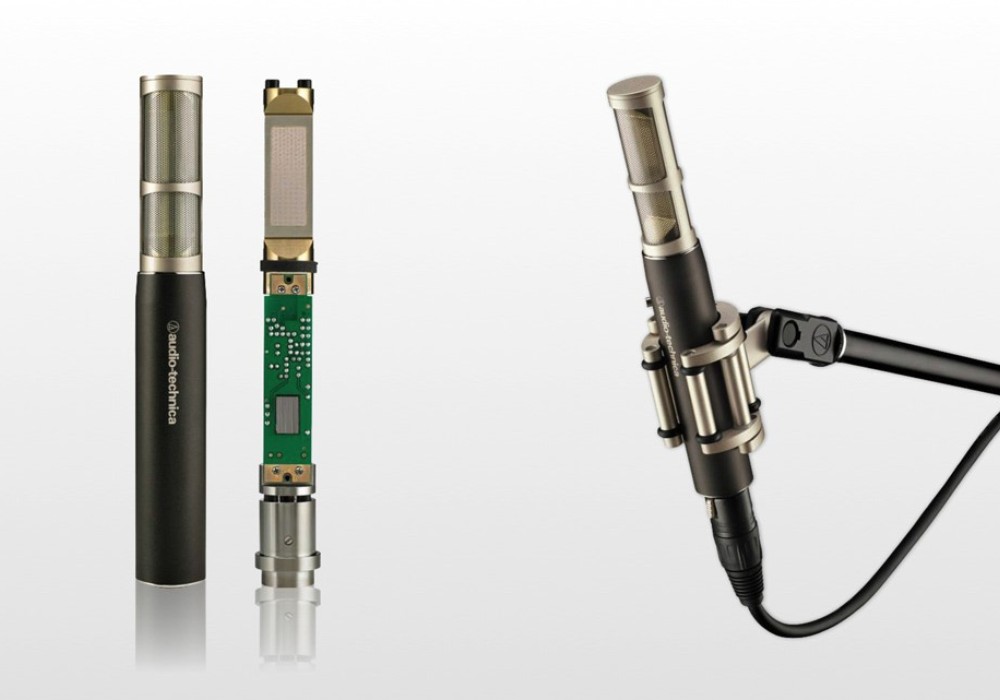 Is that a ribbon mic? Is that a square capsule? Those are just a couple of the things I heard clients ask when seeing the new Audio-Technica AT5045. In a world of copies and recreations of classic...

It used to be that you couldn't get a large-diaphragm condenser mic for under two grand, and there weren't that many choices anyway. Then some less expensive mics started appearing, and it seemed like...

I have to admit I'm really not one of those people that lusts after recording equipment. I'm sure one reason is that I have a well-equipped studio with a lot of gear that I've amassed over the years,...

Every now and then, I acquire a product that's so unbelievably awesome, that I have a difficult time penning a review of it. The FC-387 Atlantis - Lauten Audio's newest multi-pattern, large-diaphragm,...