I found hip-hop/dance music pioneer Jon Baker at his GeeJam Studios, an exclusive residential recording studio and hotel in Port Antonio. Jon has recently been working with the legendary Jamaican mento band, The Jolly Boys, including their covers album, Great Expectation. 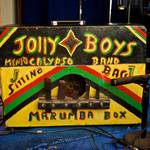 The rumba box mic'd for rehearsal 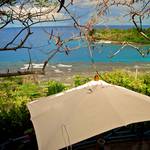 The view from the main sound room 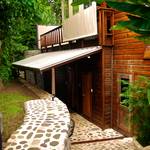 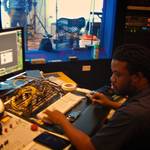 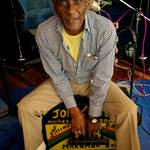 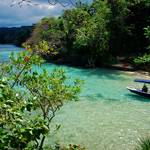 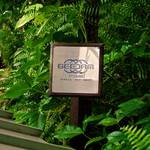 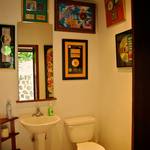 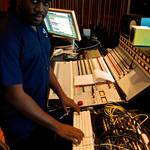 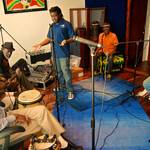 Dale "Dr. Dizzle" Virgo and The Jolly Boys at GeeJam 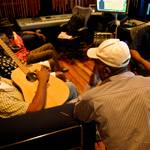 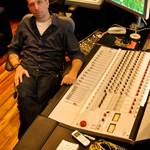 Jon Baker, behind the board at GeeJam

That was quite interesting. The story of who The Jolly Boys were and what makes up mento music is so rich in content and pre-dates reggae. I ignored mento for 20 years, because to me it was just this marginalized "for the lobby of tourist hotels in Montego Bay" music — a bit uncool. It was only through taking them into the studio and listening to songs such as "Night Food" — which was written in the '40s and its distinct theme is oral sex. There are songs about corrupt politicians, about the woes of alcoholism and about women who are unfaithful to their men — this is not tourism music. This was sociopolitical music of its time that came from the cane fields — the post-slavery music of Jamaica. I've been somewhat out of the front line of the music industry in the last six years because I was renovating the property in Port Antonio and expanding it into a small private hotel along with the studio. That's where I was introduced to some old boys that are from the area called The Jolly Boys. They've been a band since the 1940s. They came up to the Bushbar, which is our restaurant in the bush, and that's when I noticed there were only four of them. There used to be six. I started chatting to Albert, one of the newer members of the band, and he's 72 years old.

Yeah. He explained that one of the guys has Alzheimer's, another guy [Moses Deans] died; and I realized that this form of music called mento, as well as these guys, weren't going to be around much longer. Seventy percent of all the great mento musicians are now dead. So that's why we put this band together. Albert Minott was the original fire-dancer that accompanied the Jolly Boys, then later picked up the guitar in the '50s. You've got Joseph "Powda" Bennett, who actually performed with Monty Alexander at Lincoln Center a few years ago. There's also the original rumba box player Derrick "Johnny" Henry. Then there's Lenford "Brutus" Richards who was in Burning Spear. We've also got a new member that's joining us to play guitar, because Brutus has taken up the banjo now — there's a real lack of banjo players in Jamaica. So when I'd just finished building the studio I had just brought a young engineer onboard called Dale "Dr. Dizzle" Virgo who had just left the Edna Manley [College of the Visual and Performing Arts,] School of Music in Kingston. I thought, " Let's record every known mento song and donate the project to The National Library of Jamaica for posterity." It didn't take too many days of being in the studio before I decided, for the first time, to take a producer credit. Why not? I've been doing this for 30 years.

So this is the first time you've taken a producer's credit?

Correct. I soon saw that Albert Minott was a fucking star. He took ownership of every song he performed. Mark Jones, from Wall Of Sound Recordings in the UK, was on the property and he came into the studio; that's when we had this crazy idea to get Albert to cover Amy Winehouse's "Rehab."

The choice of material for a mento album was very inspired. Like Iggy Pop's "Nightclubbing."

Between myself and Chris Sullivan (another great pop culture icon from England) and Mark Jones, we came up with the track listings. These are all songs I like. I realized this would work only if we recorded the five basic instruments of mento. No electronic music in it at all. It was recorded on Pro Tools through the Neve board, but we didn't use electronic bass and so forth.

What is that bass they sit on?

That is a rumba [or marumba] box.

On the album, the bottom end is amazing. I was wondering if that was due to the box or some electronic sound?

After we had gotten the basics of the album down — and I had stopped Dale from sneaking in some keys or electronic sounds -we did some additional production and enhanced it. We brought in some more classic rock drum setups, mixed with the ethnic drum sounds like the gumbe and the congas — just to enhance it, not to take it to another place.

Mento seems closer to its African roots than calypso.

Yeah, I wanted to keep what was there. I didn't want it to become novelty music; which it had become. What you've got to remember is in the '40s and '50s you had a lot of movie stars and showbiz people who came here and they listened to the Jolly Boys' music. That was the heyday — Frenchman's Cove was frequented by the likes of Liz Taylor and Dean Martin. Albert and those guys have played to all of those audiences.

Errol and Patrice Flynn were in the area in the '50s when he owned Navy Island. They were called The Navy Island Swamp Boys, but Errol renamed them The Jolly Boys.

What are the future recording plans with The Jolly Boys?

I don't believe we can come back with another album of cover songs. So what we're doing now is developing the mento sound further. We're going to write some modern mento tunes with current issues and see if we can build upon the genre a bit more.