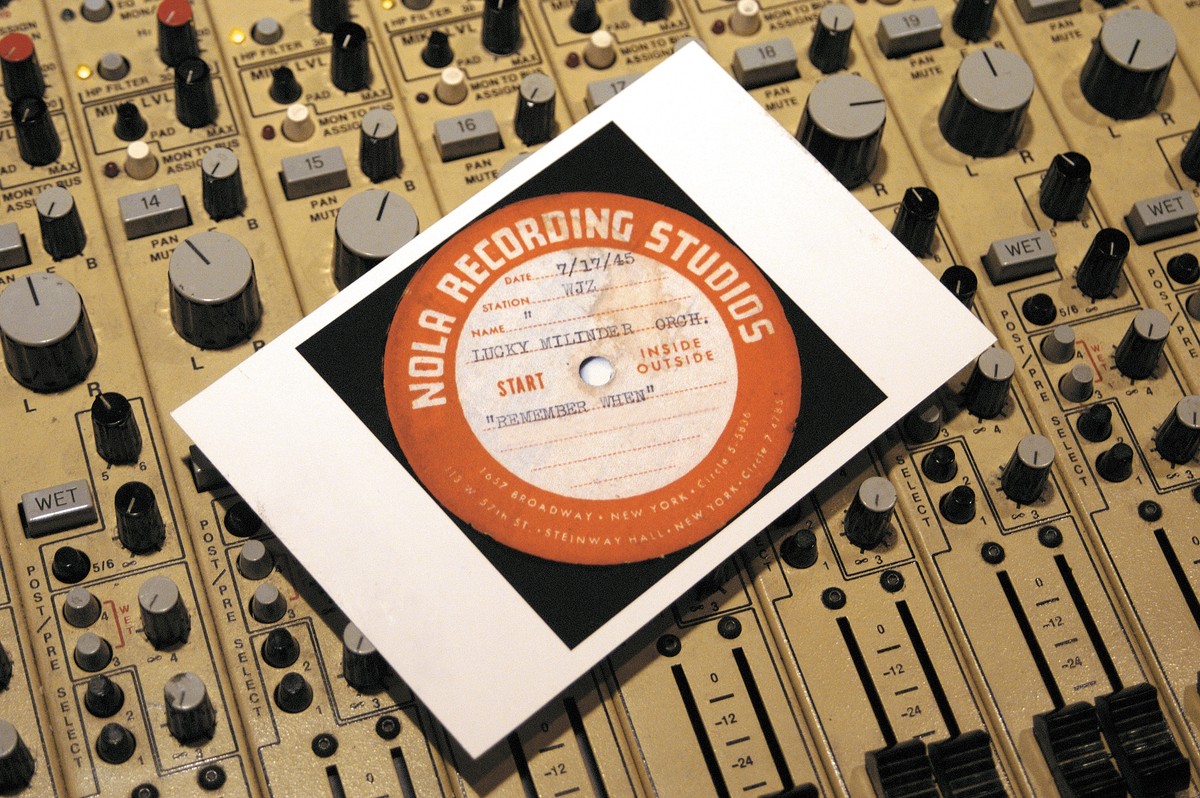 The most important question is, 'What the hell are we gonna eat for lunch?'" This is how photographer Brian Silak and I were greeted by a portly and extremely jovial Jim Czak, co-owner and chief mixer, a true chef of sound, at Nola Recording Studio. Located on West 57th Street in Manhattan on the same block as Carnegie Hall, Nola has been host to a veritable who's who of jazz musicians and big bands. In its present location since the 1940s, the 17th floor penthouse studio of the former Steinway Building has been frequented by rehearsing and recording legends such as Duke Ellington, Dizzy Gillespie, Ahmad Jamal, Dave Brubeck, Barbra Streisand, Peggy Lee, Ella Fitzgerald, Lena Horne, Elvis Costello, and pretty much anyone else who ever lived — or so it would seem. While being force-fed the largest pastrami sandwich I have ever encountered, I was treated to a four-hour stroll down memory lane, Jim Czak-style.

What is good sound?

Good is in the eye of the beholder, as they say — or in the ear of the beholder. Generally speaking, with a music background — being exposed to musicians and understanding arrangers — and working with great people over the years, you come to realize what "good" is. Or what the starting point is, anyway. That's where the art comes in, not the science. You can't read a book and say, "This is the starting point." When it comes to aligning a machine and the technical stuff, I leave that to the professionals. I'm a musician. I want to be a musician.

How do you feel your musicianship approach to engineering is different from a technical approach?

I'm not really an engineer like Wally Sear and other guys. I consider myself an audio mixer. Engineering is a science. You really have to know something. And a mixer is sort of like a cook — you can learn all the ingredients, but putting it together is an art. It's more art than science. I can't see how you could do this job without being somewhat inclined to music, so that you can relate to what the musician or singer wants to accomplish.

Tell me about Nola.

I got here in '76. Originally, Nola's was a rehearsal studio over Lindy's Restaurant on Broadway. All the big bands would rehearse upstairs there — all the name acts that were going to be at the Roxy, the Paramount and the Palace. I guess the lease ran out. I'm not sure — this had to be the early 1940s. They started to come up here to the Steinway Building. Vincent Nola was the man. He took the third floor, which was small rooms for piano and voice, and Steinway Hall. There was a recital center for Steinway on the third floor. It sat about 200 people. And then he took this floor up here and the guys would come and rehearse. Vincent Nola, the old man, had a son, Tommy. Tommy Nola had a radio board and he would record the rehearsals. So that's how Nola Recording Studio got started.

Over the years, you've done sessions with some pretty incredible people. Liza Minnelli, Blossom Dearie... Who are some others? Dave Brubeck-didherecordhere?

Yeah — something for Jamey Aebersold.

You mean one of those play-along tapes?

Something like that. Elvin Jones recorded here. I also had the great fortune of working with a lot of female singers. Gloria Lynne. I just did an album with Ernestine Anderson. Then of course, I did two albums with Lena Horne, and we became great friends. I do a lot of jazz.

Describe some of the more memorable sessions that you've worked on here.

I really liked working with John Pizzarelli when he was BMG. We did a great Beatles album. Don Sebeski did the arrangements. Lena's albums, Blossom's albums. I did a nice album with Dianne Carroll. It's hard to say. I used to do a lot of Latin albums. I love Latin albums. I did a couple of Polish albums that were great. Really swingin'. It's the music! James Galway was wonderful. I just did something with Sebeski and Hubert Laws — "Ave Maria" — playing flute with strings, string quartet. Sesame Street. Been doing that for 18 years. Great stuff! Worked with Joe Raposo — great songwriter. "Used To Be A Ballpark There" and "Nowhere" and "It's Not Easy Being Green." I worked with a lot of great guys. Benny Golson was up here once and he said [pointing], "Dizzy Gillespie played trumpet right there!" You know, this was the rehearsal room for all the jazz guys. Jamal at the Penthouse, Ahmad Jamal playing piano.

That album was recorded here? That's amazing! Are there any albums that you've done here that you are particularly proud of, fidelity-wise or recording-wise?

The ones that I really like are the ones that were done live. Without overdubs. I like my big band work. I like Sebeski's albums. Moving Lines and the Duke Ellington album that he won a Grammy for. Pizzarelli, that Beatles album or Our Love is Here to Stay. It's the big band work...