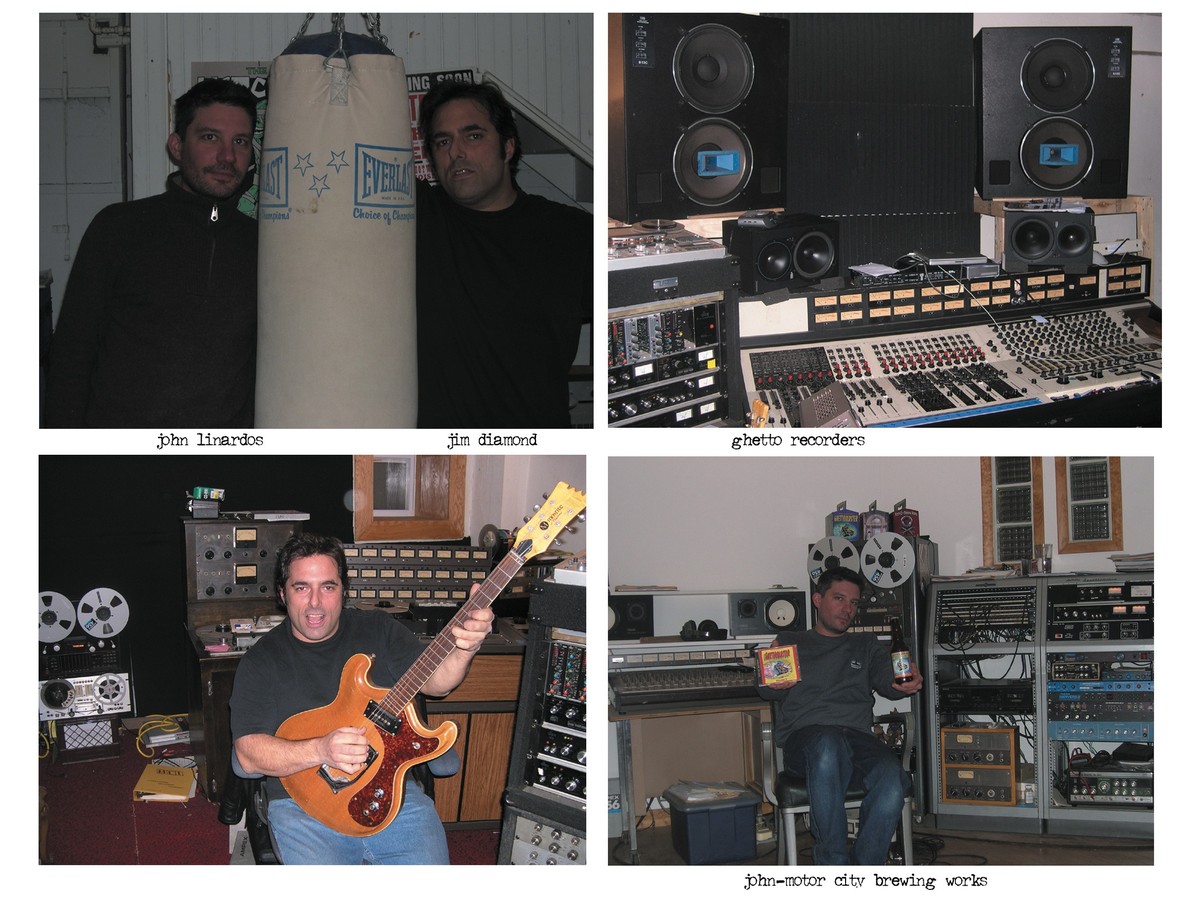 Tucked away smack dab in the middle of two stadiums, the Fox and State theatre complexes, a police station and the rotting corpses of Detroit's once elegant apartment district, lies one of the city's least known gems. If you don't know where it is, you'll never find it, but once you're told and are inside, you won't forget it. Jim Diamond and Ghetto Recorders are names synonymous with the enormous popularity of the Detroit garage rock explosion. As a recording engineer/producer/studio owner, founding member of The Dirtbombs and member of The Witches and Bantam Rooster, Jim has worn many hats in the progression of Detroit's underground music. That said, there is a second party to this story — John Linardos, mastermind behind Motor City Brewing Works and world famous Ghetto Blaster beer. It was his personal rehearsal and demo studio that eventually became the Ghetto Recorders that we know and love today. Beer and rock 'n' roll — the perfect prescription, and the perfect segue into this interview. I got together with Jim and John at the Motor City taproom on a balmy night in October.

What was the thing that interested you in recording versus just playing music?

JD: I was always into recording. My dad knew a guy who sold CBs and got Shure mics at cost. I got two of them in seventh grade, plugged them into this old Zenith 8-track and would record myself playing the bass.

On an 8-track cartridge deck?

Right on. How about you John?

JL: My parents lived in a quad level, and they had the NuTone. Remember those old intercom speaker systems? There was an RCA input on each panel that all lead back to a main box. We had a piano in the living room, so I'd put a microphone into the panel in that room and record myself playing. It sounded like shit, but I actually tried to start my first band around that deal. I recorded just about everything as a kid, and was really into Super 8 too. 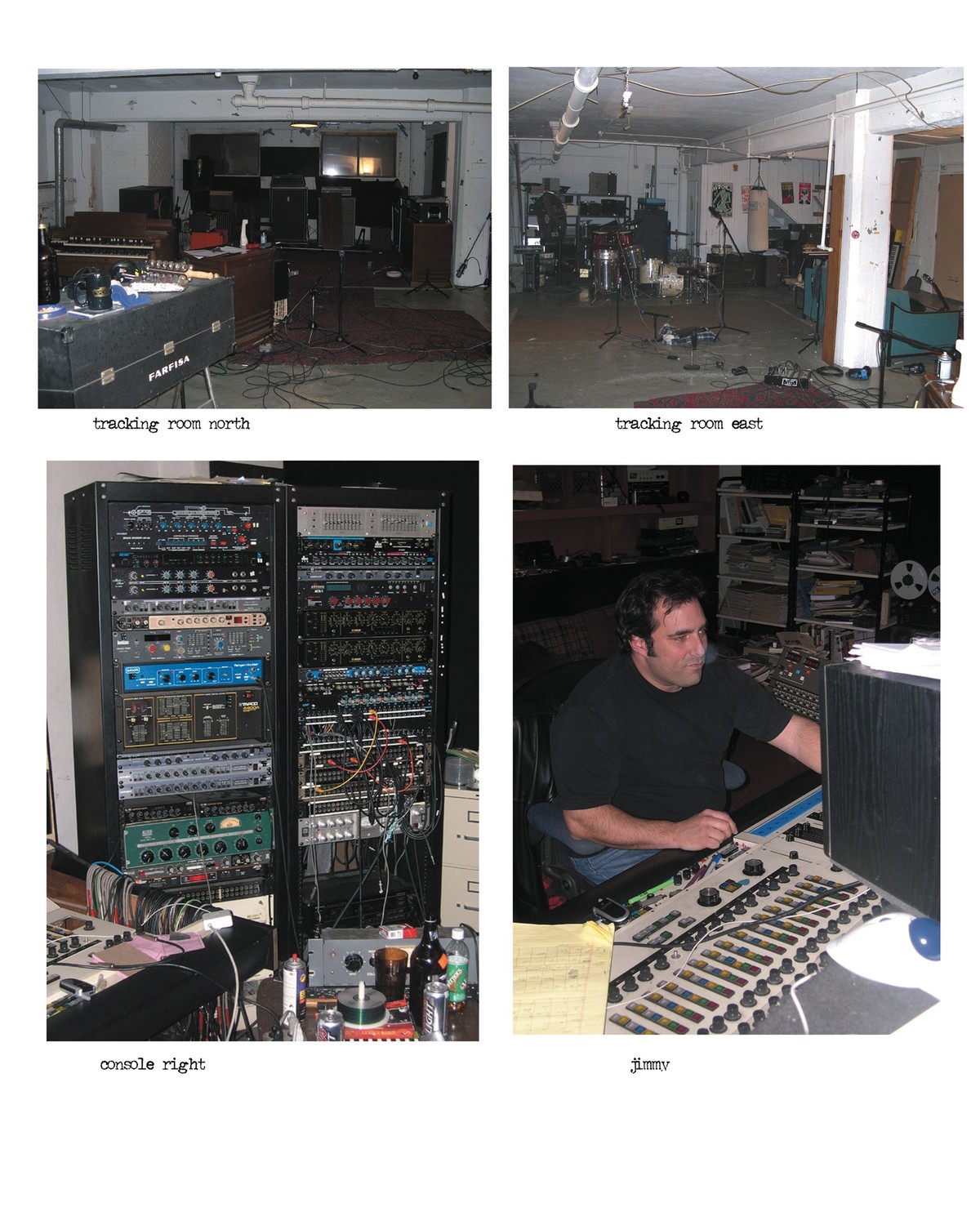 So when was Ghetto recorders started?

JL: You have to recognize the fact that it was an evolution. I mean you have to think about how we even found that fucking space. How else would we even end up down there?

How did you find it?

JL: I was working for Detroit Mackinac, [the first brewery that was in the building] so I used to deliver to the Elwood [Bar & Grill], because we could self-distribute back then. The Elwood was owned by Mr. Forbes. We got to talking one day and I mentioned that I was looking for a living/studio/rehearsal space. That's how I got in there, then four years later Jim moved in and that's when it officially became Ghetto Recorders — in 1996.

I understand that some of the first records done there were via studio parties. Who were some of the bands and what was the modus operandi?

JL: The Detroit Cobras and The Dirties [Dirtbombs] were a couple I can think of. The Hentchmen are another. I'd get a keg of beer from work, the bands would play live, and we'd just record them. You'd get some drunken crowd noise, etc., but man was it fun.

JD: The first "studio" records involved Bantam Rooster, The Dirtbombs, and Outrageous Cherry. I was working at another studio in town, called Tempermill [Studios], and that's where I met Mick Collins [former front man of The Gories]. He said he had a new deal going on [with The Dirtbombs] and wanted to do some singles, etc., so we did about two or three here on the old gear. That stuff was all on 8-track 1/2". We had a [Tascam] 38 and a Tascam M-50 broadcast console then. That console and tape machine didn't last too much past those early records.

As you acquired better gear and word of mouth spread a bit more, who were some of the people you started to record?

JD: Things were starting to reach the national level for attention on Detroit, and this was around '97-'99.

JL: The renaissance, if you will. JD: The Dirtbombs, Volebeats, Immigrant Suns, Andre Williams, Kim Fowley, Outrageous Cherry, Witches, John Spencer, New Bomb Turks, The Go, The White Stripes, The Sights and you guys [PAIK] were early on. The Wildbunch, who changed their name to The Electric 6, were being recorded then.

JL: If I can interject as well, one of my favorite unknown bands to come out of the studio was Ko and The Knockouts. That CD was great, very commercially viable, but just didn't get the exposure.

The Sights are an awesome group and good people. What's it been like working with them from such an early period?

JD: The Sights have been a lot of fun. I did their first record in '99 right after Eddie Baranek and the bass player, Mark [Leahey] had graduated high school. It's been fun 'cause we've gotten to grow together as their sound evolved, and I have played I would think a...