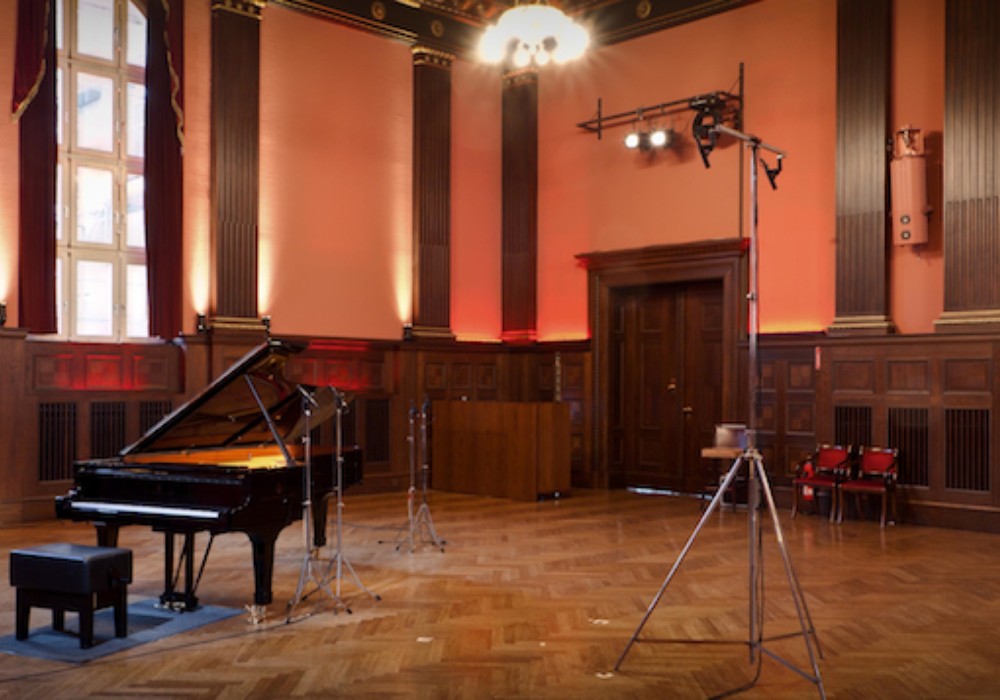 In 1910, at 38 Köethner Straße, the Builder's Association of Berlin [Baugeschäfte] began construction on what would eventually become an architectural neoclassical masterpiece. Completed three years later, it housed many offices — including their own — and even the influential, and controversial, Malik-Verlag publishing company and bookstore. But at the heart of the building was the exquisite Der Meistersaal, or "Master's Hall." Concerts and readings were regularly performed in what became an important hub of the Berlin arts scene. During the Second World War, the Nazi's Reichsmusikkammer used The Hall for propaganda concerts until 1943 when the rear wing of the building, along with the rest of the neighborhood, was destroyed by a bomb. Thankfully the Meistersaal was spared. It remained empty until a post-war attempt to revitalize the space started, and then halted, when Köethner Straße, once located in the center of a thriving, artistic city, found itself on the front line of the Cold War in 1961. Just 150 meters from the front door was the border of East Germany, and eventually Die Mauer — the Berlin Wall. The street, and the once glorious building, sat in disrepair overlooking the grim No Man's Land that was the gateway to East Germany. It occurred to the label Ariola Records that such a hall, which had unintentionally found itself in a rather quiet neighborhood owing to it's now undesirable location, would be the perfect place to record their growing roster of artists. "The Great Hall By The Wall" began it's new life as a factory for German pop music in 1964. It would eventually change ownership over to the music publishing power family, the Meisels, who would locate their now famous Hansa Tonstudio in the building. 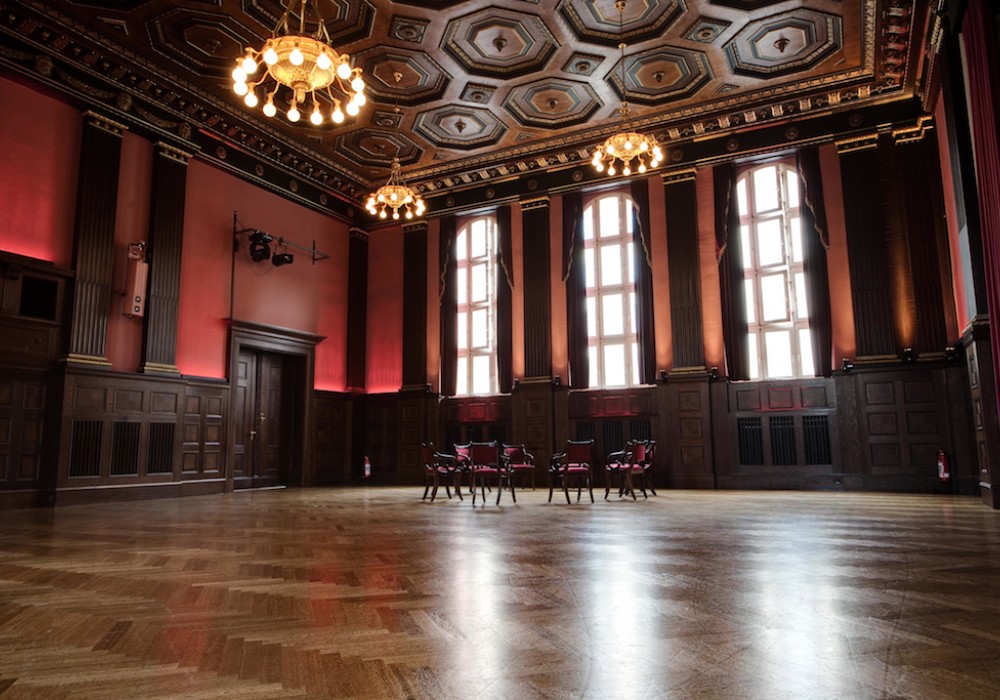 There's probably not enough room in this magazine to list the seminal releases that have been made in the legendary space, but U2's Achtung Baby, Iggy Pop's The Idiot and Lust For Life, REM's swansong Collapse Into Now, David Bowie's "Heroes," and other parts of his "Berlin Trilogy," are only a few. (The cover of David Bowie's recent record, The Next Day, is a Dadaist take on the album art of "Heroes," and its single "Where Are We Now?" is a love letter to the city where he did some of his best work.) Nina Simone, Depeche Mode, Nick Cave, Supergrass, The Pixies, Tangerine Dream, Killing Joke, Nina Hagen, Marillion, Siouxsie and the Banshees, David Byrne, opera superstar Luciano Pavarotti, Herbert Grönemeyer, and even the much maligned Milli Vanilli, also worked at Hansa over the years. The studio is known for being an experimenter's paradise, but it's also a private space where artists can work in peace, which is why I felt honored to be invited into the studio by engineer/producer/studio director Alex Wende to learn more about its history and what makes it so special.

How did Hansa Tonstudio get started?

The two Meisel brothers [Peter and Thomas] started Hansa Musik Produktion company in [1962]. They wanted to record German artists. Before Hansa was in this building, the big hall downstairs was the old Ariola-Eurodisc Studio — since the late '50s or so. They did a lot of classical recording. The Meisels would ask to rent space here when they worked on their own productions. First it was two or three artists, then five, then ten. It became more difficult to book space, so they said, "Okay, we're successful and we have the money; let's just build our own studio." That was Hansa Studio One, near the Victory Column [in Tiergarten, Berlin], which was at that location for about nine years. Around 1974 they asked if they could buy this building. Ariola said, "Fine, buy it and take over the studio." They had another place, in Munich I think, so there were no problems between Ariola and the Meisel family — it was all very friendly. So they bought it in '75 and started working in the old Ariola studio, which they then called Hansa Studio Two because Studio One was still operating [across town]. The building was still damaged from The War; the only working part was the former Ariola studio downstairs. David Bowie and Iggy Pop came to Berlin in the '70s, and made a few records at Hansa. They later closed the studio at the other location and literally moved it here, piece by piece. They took all of the wood, the acoustic absorbers and diffusers, from the old Studio One, and then put them in here. They didn't finish that until '79; they opened it in 1980. Same acoustics, the same architecture — it looked like the [old] room but with different gear, and a different desk. It was a very good time for the studio, because a lot of people around the world heard these productions and thought they should use Hansa too. That led to [booking] problems, because they only had two studios and a mixing room. They couldn't meet demand! So Studio Three was added around '82. It was on the ground floor and was very nice-looking, but... difficult with the sounds sometimes.

What made it difficult?

Depending on the amplifier or guitar, you had to [constantly move] to avoid a terrible hum. The next time, same position, there would be a hum, but none where you had been before. We thought it was something in the ground or in the ceiling; maybe an old cable from who knows when. We never figured it out.

You never fixed it?

Nope, and it was difficult to record guitars downstairs because of it. In 1993 Thomas Meisel decided to close Studio Three, leaving the other two.

What were the other recording options in Berlin when the Meisel brothers started the studio?

I think a few of the bigger record companies had studios in Germany. Ariola [part of BMG today], of course. Teldec [a Telefunken and Decca collaboration] had a big studio that is still around, but it's called Teldex now. In the '70s there was Audio Studio, but there weren't many.

Were people going abroad to record?

Not really, because for Germany that was the beginning of the modern recording era. It was rare for a German band or a young artist to make a record. It was mostly classical music up until then.

So Hansa filled a new need?

Yes, I think so. Things were changing, and [the Meisels] needed much more time than the studio here could offer when it was running under Ariola-Eurodisc. Once they owned the building they expanded; they even added a training studio. When they got the bigger, better desks — like the old Neve and, later, the SSLs — they had a practice studio in this building with the exact same desks so all of the engineers and assistants could have a chance to learn before working on real projects. It was a luxury.

You don't see that anymore!

Right! Today the [former] training studio is rented out to [German producers] Jack White and Peter Wagner. They do very successful productions with German...