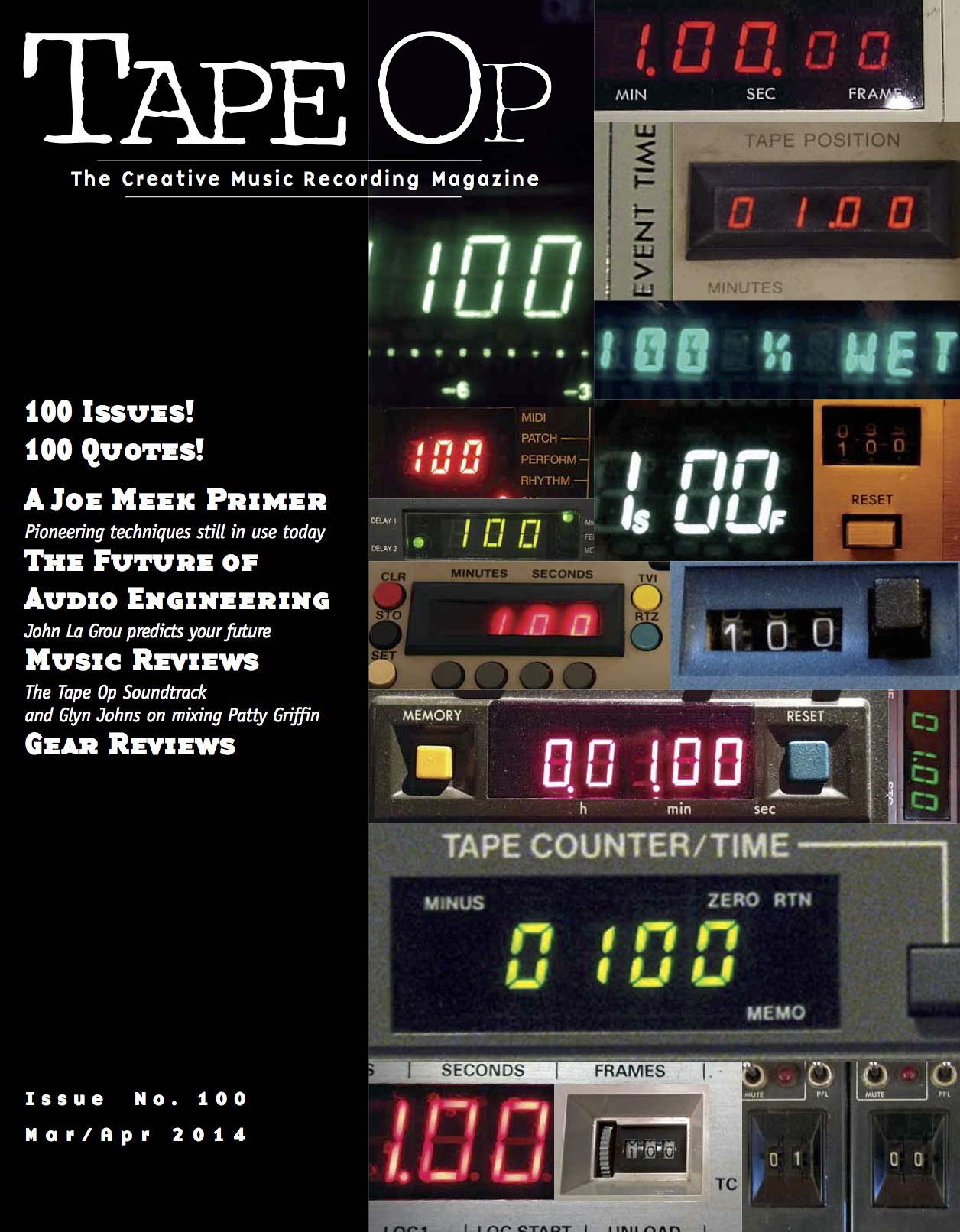 This issue marks the occasion of our 100th issue of Tape Op. As I sat on my front steps 18 years ago, spray painting photocopied magazine covers by hand, I never would've imagined that my crazy little idea would ever have carried on this long, found so many readers, or become such a huge part of my life. Over the years Tape Op has certainly changed. What started as a magazine mostly focused on creating and tracking what would become known as "indie rock" (hey, that was the world I mucked about in!), has become a forum about working with every style of music, from any era. While early issues featured ads from small record labels and independent book stores, the last 15 years have seen advertising for every kind of recording product one could imagine; even including Pabst Blue Ribbon beer, at one point.

But while there have been changes, I feel that the core values of this magazine remain the same, even if they're not always visible on the surface. Creativity, passion, beauty, excitement, and honesty remain an important backbone for what we discuss and promote in these pages. Pushing the art of recording forward, while always respecting the artist and the music, is key as well. Almost everyone involved in Tape Op records music, and most of us at the professional level. When we interview a recordist it is as a peer, not simply as a journalist or a fan (though we can wear those hats too). I think these things are just the tip of the iceberg as to what makes Tape Op different, as well as what draws our readers to the magazine.

For this issue I trawled through 100 old copies of this mag and found 100 corresponding quotes — one from each issue. I've always seen Tape Op as an extension of my own growth and learning when it comes to recording music, and many of these quotes are ones that have resonated with me for years. John La Grou, owner of Millennia Media and a fine recordist himself, has written up a piece for us on his thoughts about the future of music production — you may be surprised (or distraught) to learn where he thinks it is heading. Gerald Seligman of The National Recording Preservation Foundation discusses preserving historical recordings. Barry Cleveland illustrates many of Joe Meek's innovations in the studio.

There's far more about the future and the past of recording in this issue, so get to it. And get ready for another 100 issues of Tape Op!

PS: Many thanks and a raised glass of wine to my partner/publisher/friend John Baccigaluppi. Without him Tape Op probably would have disappeared into a fog of credit card debt and exhaustion 14 years ago. He believed in my vision, and took it up a big notch overnight. He is the backbone that lets this magazine flourish, and I don't think it could be what it is without his hard work and input. Also I owe a HUGE thanks to the many contributors and "staff" over the years. Many of you are my close friends and have helped guide the magazine. You know who you are. Thank you.

The End of the Day

It's getting late. We've been working on this album off and on for months. We're nearing the end of the last mix, and it's sounding pretty good. It came together fairly easily, as we'd carefully...

Despite everything that we know about acoustics, and the trouble we go through to treat our rooms properly, a popular practice in recording studios is to place nearfield monitors on top of the...

by SwirlyGig  |  reviewed by Pete Weiss

Headphones tend to get dropped, placed, or temporarily forgotten on the studio floor - right? And then stepped on, tripped over, and/or kicked and busted. And once they are broken, they need to be...

The 500-series market has seen a flood of new products, to say the least. I keep waiting for Dyson to come out with a 500-series vacuum. Or maybe Bodum will make a milk frother for the format. The...

While making acoustic adjustments to one of our control rooms, we decided more absorption and diffusion were needed for the front wall. Diffuser City is a small company that makes one-of-a-kind...

The Neumann U 67 is one of my favorite mics of all time; I use it on nearly every tracking date that I do, on a variety of instruments, including electric and acoustic guitars, as well as vocals. When...

I have seen the future, and it is touch. And fun. Cakewalk's Scratchpad is their first foray into iOS apps and is exactly what it sounds like. The main portion of the on-screen interface is divided...

When I began work on what would become Elliott Smith's New Moon album in 2006, I knew I might have a few noise issues to tackle. One song in particular, "Angel in the Snow," had been recorded onto...

The RED48 is the love child of a control-room monitoring system and a 48-channel summing mixer, housed in a 2RU- height rackmount box with a companion desktop remote. I don't know if anyone else...

by Classic Audio Products of Illinois  |  reviewed by Adam Kagan

by Hamptone  |  reviewed by Larry Crane

I've been using a pair of Hamptone HOC1 single-channel compressors on my mixing and tracking sessions for several months now, and they have become my favorite tools. I think this is a very unique and...

by LightDims  |  reviewed by Adam Kagan

Over the past year or two, I have had many pieces of both professional audio gear and consumer electronics that employ exceedingly bright LED lights. In the studio, these lights can be especially...

by Moog  |  reviewed by Chris Koltay

I tend to think of things in reference to a chronology of gear purchases. Like, "Oh yeah, we had just gotten that mic when we tracked those vocals!" Along those same lines, my studio's chronology...

Every time I try a new mic, I have to be able to justify the purchase, because it has to be useful enough to earn its place in the mic locker at Studio G Brooklyn [Tape Op #41]. The place is filled...

I've been a fan of Patty Griffin's since I heard her first album, Living With Ghosts in 1996. The record is just Griffin solo with her acoustic guitar, and the sound quality is pretty rough. It sounds...

For this 100th issue, John and I tried to think of some of the albums that captured the attention of our contributors and interviewees in our early years, as well as what has made for good listening...