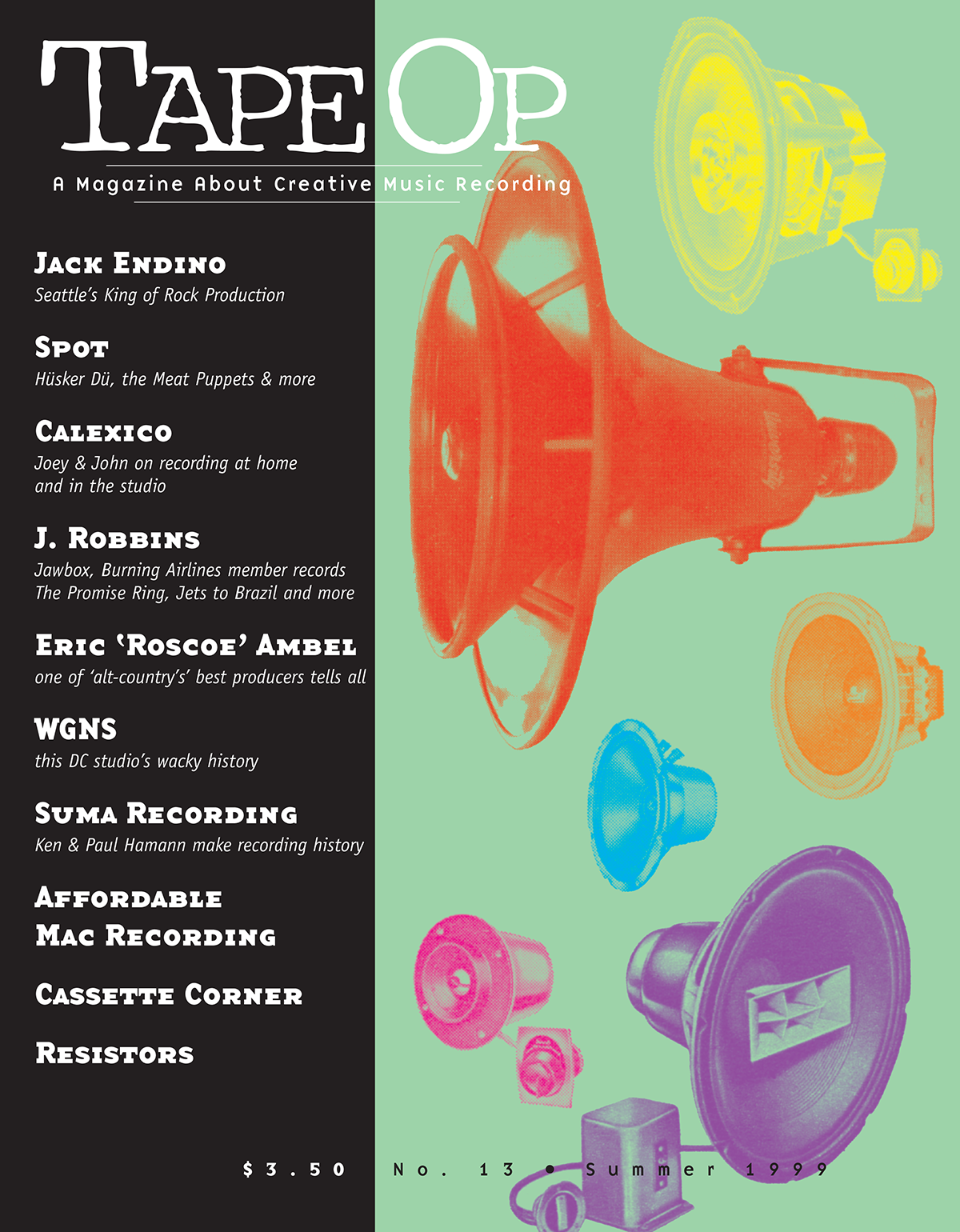 We're proud to have interviews with some of the engineer/producers who helped define the new sounds of rock over the last 30 years. Ken Hamann cut his teeth on classic 60s bands like The Outsiders before working with Pere Ubu. Spot recorded classic post-punk records for The Minutemen and Hüsker Dü in the 80s. Jack Endino helped define the "Seattle Sound" with his recordings of Mudhoney, Nirvana and more. Other people, like Geoff Turner at WGNS and J. Robbins helped define the vibrant DC scene, the members of Calexico have been recording atmosphere laden "desert rock," and "Roscoe" has been a leading producer in the "alt-country" world. There's room for a lot of creative, fun recording out there and I think this issue's articles illustrate that well.

In other news, it looks like there will be a TAPE OP book at some point in the future. It will contain articles from the first ten issues (some of which will be expanded upon) plus a lot of new pieces. I don't know when it will be out but keep your eyes open! The TAPE OP Magazine Compilation CD should be out at the end of summer. Look for it in your favorite store or check with us to see about mail-order. It's over 60 minutes of fun, including tracks by Elliott Smith, Man or Astro-man, East River Pipe and more.

Welcome to a very overdue installment of my geekish banter. Issues of Tape Op have been flying by without me and I thought it was about time I blessed you all with some more electro-quackery on guitar...

"Objective music is not self-expression but a descending form of higher communication." -E.J. Gold 1. The essential aim of High Velocity Sound Engineering is clear aesthetic communication. The...

The first time I ever went in to a studio to record was in the summer of 1985. Our band, Vomit Launch, had been around for almost 6 months, and we decided it was time to hit the studio and make a...

I was in a local audio shop with my pal Craig when he mentioned this inexpensive little analog to digital converter. For under $170 you can get an outboard converter to put in between your mixer and...

by SHURE  |  reviewed by Steve Silverstein

Someone once advised me that no cheap microphone is a bad microphone. With the same principle in mind, I bought this device (which, despite its name, serves mostly as a preamp and something of a...

by DANELECTRO  |  reviewed by Hilary Johnson

When it comes time to mix, how about recycling those guitar pedals you have lying around - some of them work really well for a specific effect - just stick one on an aux send! Take the Danelectro...

It seems like more people are mentioning these cool little compressors lately. They're 1/3 rack space sized jobs that do a better job than a lot of compressors that cost way more. They have the usual...

Bands from the 1980s which most frequently received the label psych revival included Milwaukee's Plasticland and Los Angeles's the Three O'Clock. They combined wonderful 60s influenced playing and...

I Want Some CD

by THE MAKEUP | reviewed by Dewey Mahood

This album collects the past four years of Makeup singles, beautifully displaying their progression from raunchy garage revivalists to sophisticated soul-psychedlia tune-smiths. We hear the group...

by PROLAPSE | reviewed by Larry Crane

It has always seemed to me that UK "bands" are a lot less afraid to use effects and such in their recordings compared to their US counterparts. Prolapse are a case in point. These mixes are a study in...

by LEXO AND THE LEAPERS | reviewed by Matt Mair Lowery

The Other Side Is Mud CDEP

Repp recorded all but one track on this EP at Hush Records' head Chad Crouch's PowerMac home studio. One of the hallmarks of Hush is Crouch's ability to capture warm, acoustic, singer-songwriter...