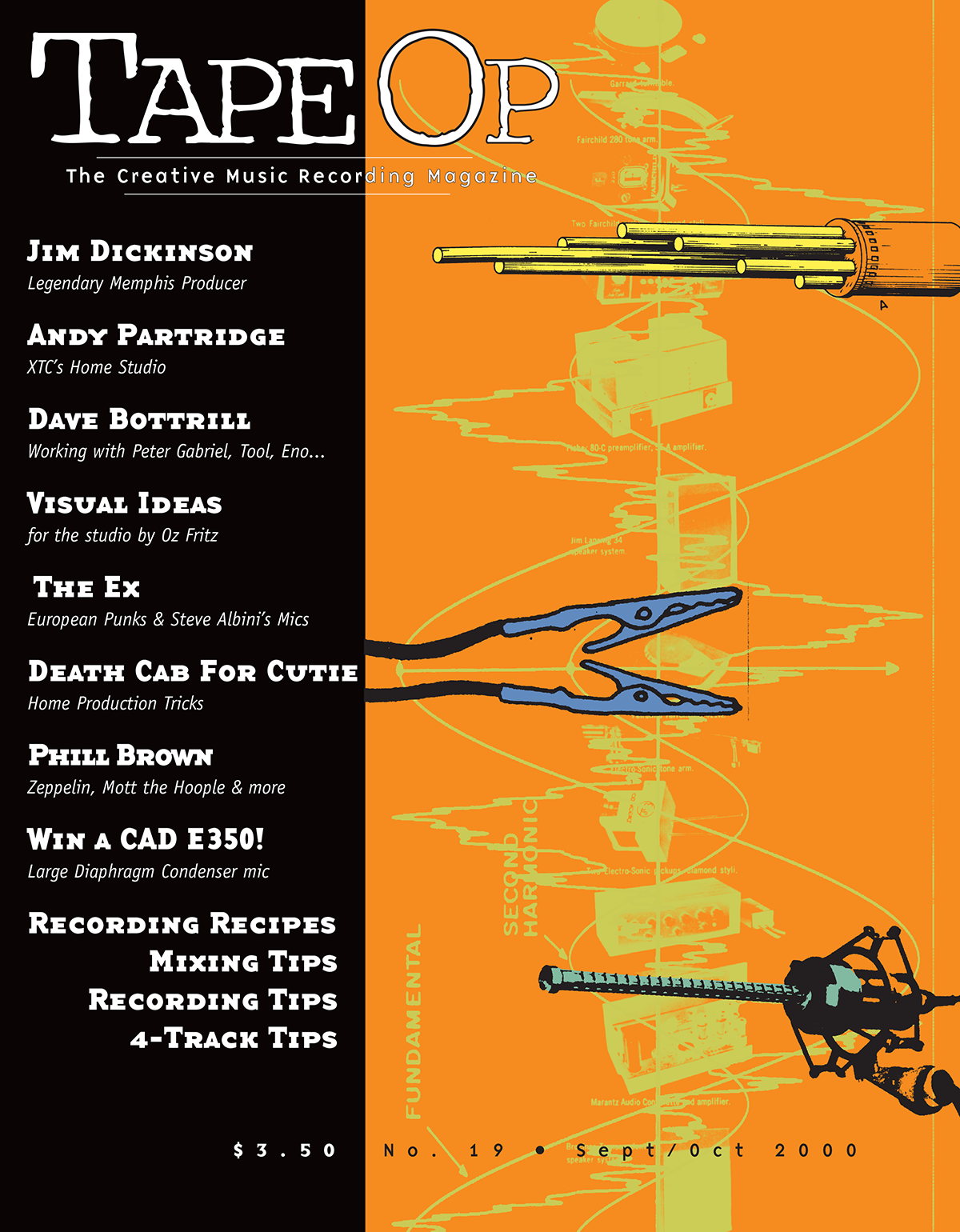 I've realized that although some time ago I promised to share more "personal" information in these Tape Op intros, that I've gotten off the track and started sounding kinda business-like and distant. Okay, so here's what I've been up to! At the end of last year I worked with producer John Goodmanson on the recent Sleater-Kinney record, All Hands on the Bad One. It was a blast. I recorded some records for the Dickel Brothers and Sarah Dougher and in February started a "reunion" album for the Go-Betweens, which I engineered. That was truly a dream-come- true, as I've been a big fan of their albums for years. To have them asking my opinions during the recording was almost surreal. I've worked on many more records since then: Luther Russell, Braille Stars, The Swords Project, Sugarboom, Honey Baked Goodness, Joe Davis, Sean Croghan and more. It's been pretty busy — freelance engineers Jeff Saltzman and Joanna Bolme have taken up a lot of slack — but it's rewarding to help bring these albums into the world. I'm exhausted sometimes, and I worry if I take enough time off to spend with my girlfriend and her daughter. I question whether I have a life outside of music — do I need other interests to keep me sane? I don't know, but I'm driven to keep making records and to keeping Tape Op going. Maybe it's to preserve my little piece of immortality by making a mark on the world, as Jim Dickinson mentions in this issue. Yeah, maybe that's it.

I saw XTC live on November 23, 1980, at the Masonic Temple Auditorium, Detroit, MI, USA opening for The Police. The only problem with the show was that I had no idea who XTC was. I remember a visually...

It made sense that in the summer of 1999, the 10th anniversary show of the current line-up of The Ex took place in Amsterdam and included Shellac as well as a host of great experimental Dutch bands...

Death Cab For Cutie attacked me when I heard their first album, Something About Airplanes. I was floored by the melodies, and the overall sound of the entire album. Their first album was constantly in...

Megaphones The megaphone, or "conical" shape, used to be the crux of the the recording business. Early recording devices used "horns", as they called them, to capture and project sound. The size,...

My job as a recording engineer deals with the reception and transmission of music. This involves working with musicians in a special kind of laboratory commonly known as a recording studio. The most...

Audio reproduction formats have been in flux since the first cylinder spun over at Edison's workshop. The mechanical "horn" system of playback, used on those early recorders and 78 players, gave way...

by Pioneer  |  reviewed by Steve Silverstein

Pioneer seems to have designed this unit to add spring reverb to a home stereo. It uses RCA connectors and aesthetically matches Pioneer home stereo components of the era. While it lacks professional...

Following on the heels of Spark 1.5, Spark XL is a new version for Pro Tools users who would like to use their TDM plug-ins inside of Spark. Spark 1.5 is a stereo, real- time audio editor with...

by Midiman  |  reviewed by Rich Hardesty

One thread that runs quite regularly through the PC-based recording newsgroups I monitor involves mic preamps. Not, so much pertaining to "which ones sound the best?" but more often- "uh, what do they...

by Trident  |  reviewed by Steve Pogact

When studio recordists think of Trident, they envision the classic English console, a stately oak trimmed board, eleven feet long, suitable for the world's great studios and costing many tens of...

by Epiphone  |  reviewed by Pete Weiss

About five years ago I was one of the many folks who "rediscovered" the late Clarence White's super-cool faux- pedal steel guitar techniques with the Byrds and very much wanted to install a...

by Royer  |  reviewed by Steve Albini

The Royer microphone couldn't have come at a better time. With every electronic company in Christendom exploiting the availability of Chinese condenser mic capsules (and entire microphones) for OEM or...

by DBX  |  reviewed by Rob Lodes

by CAD  |  reviewed by Larry Crane

Several years ago I was looking around for a tube mic for my studio. There were very few "non-vintage" offerings out there, and I ended up buying a used Manley Cardiod Reference mic, which I never...

by Roland  |  reviewed by Sam Coomes

My interest in recording doesn't go much beyond recording myself and or my own band. Consequently, my studio is not intended to be useful to any other customer beside myself. I have been involved in...

Fontanelle, a Portland, Oregon, quartet which includes orphaned Jessamine offspring Andy Brown and Rex Ritter, paint a bipolar musical landscape that is both soothing and sardonically ominous in a...

by Rumah Sakit, The Halifax | reviewed by Dewey Mahood

Recently I've had a few conversations with musicians about the difficulties of getting all your ideas finished when working in the studio on a tiny budget. Since indie releases generally can only...

The CD reissue of Linda Perhacs's Parallelograms illustrates that a CD mastered carefully from a vinyl pressing can still sound great. More importantly, it returns to print a beautiful...

“Sex is the Triangle for the Perfect Square” 7”

The prominent use of synthesizers tends to overshadow other common tendencies on new wave records. While Brooklyn duo Beautiful Skin rely very little on synthesizers, they probe far less obvious...

by Jandek | reviewed by Steve Silverstein

Ready for the House and Later On CD reissues The mysterious figure known only as Jandek started lo-fi home recording in 1978, long before anyone thought of using those words. The Beginning marks his...

Even with the recent reissue of Bruce Haack's 1971 Columbia album The Electric Lucifer, his innovative approaches to home recording and electronic sound generation remain unfortunately overlooked....

by Mastica | reviewed by Roman Sokal

Mastica are a culture all of their own. And something as experimentally cabalistic as this trio could only originate in Austin, Texas, a creative culture that is equally as magical. Their premier...