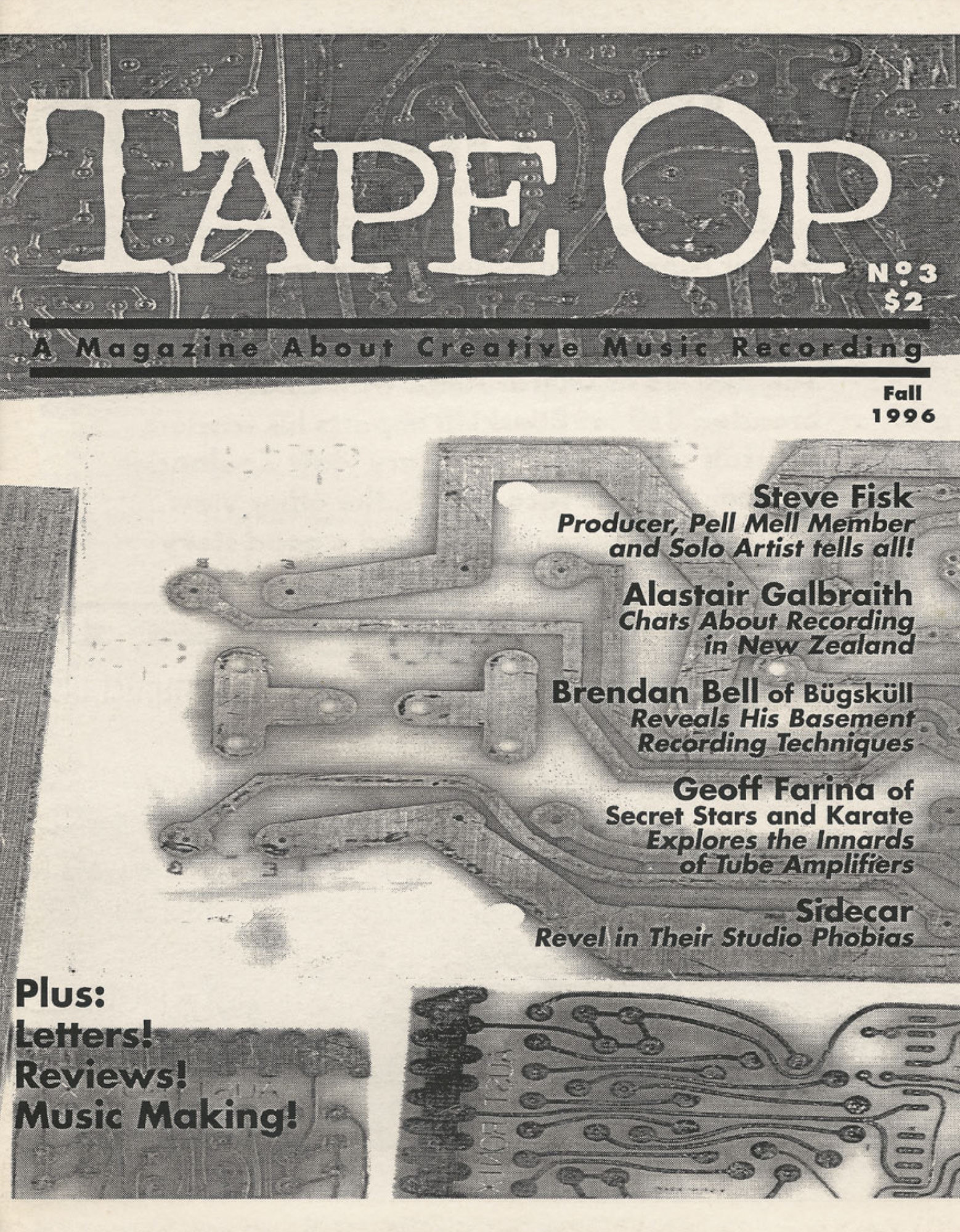 Welcome to issue #3 of Tape Op.

Welcome to the 'big' third issue.  Trying to get all this done around a vacation was a bit difficult but worth it.  Here it is.  People have been saying nice things about what Tape Op is doing and that's great!  It is a labor of love and I'll keep doing it as long as possible.

In this issue I'm trying to sidestep the whole "4 track revolution."  Hopefully there isn't one. The idea of being lumped together because of one's recording equipment seems rather stupid.  I'm trying to present as many views on the recording process as I can gather, from Steve Fisk's amazing productions in very nice studios to Alastair Gailbraith's reel-to-reel 4 track fun.  They idea is that people can all work in their own ways and that Tape Op is a place where one can see how others work and maybe learn a bit here and there.

Have you ever wondered if years of listening to bootleg recordings has influenced the way we hear music?  I had some weird insight into this while slapping on some scratchy, back-row recorded Pink Floyd vinyl bootleg right after listening to a Guided By Voices CD.  Like years of listening real hard to murky bootleg stuff has made it easier to digest non-polished rock-n-roll records.  Of course, that's the sound that rock started with; some crappy mono 45 of Bill Haley or Elvis banging out some racket in front of a couple of mics.  Sounds familiar, doesn't it?  Just more proof that the recording process and music are inexorably linked.

If any of you readers have ideas for articles, want to interview somebody, have any cool graphics (I'm running out!), or just have some good criticism feel free to contact me.  I've got a lot of ideas but people are always turning me on to people making records that I hadn't heard yet.  I'm especially interested in getting more interviews with women who've done some recording, either as engineer/producers or musicians.  Also, any sources for info on people involved in recording reggae music would be awesome.  Lee Perry, Coxsone Dodd, Clancy Eccles and others invented whole ways of recording and there's little to read about it.  Hell, there's little to read about any kind of recording!  I guess that's why I'm doing this.

Thanks very much and enjoy,
Lawrence Crane, Editor, etc...

We've been sent a lot of CD's, vinyl and tapes since starting Tape Op.  Here's a rundown of some of the more interesting ones and their recording origins.   LILYS Better Can't Make Your...