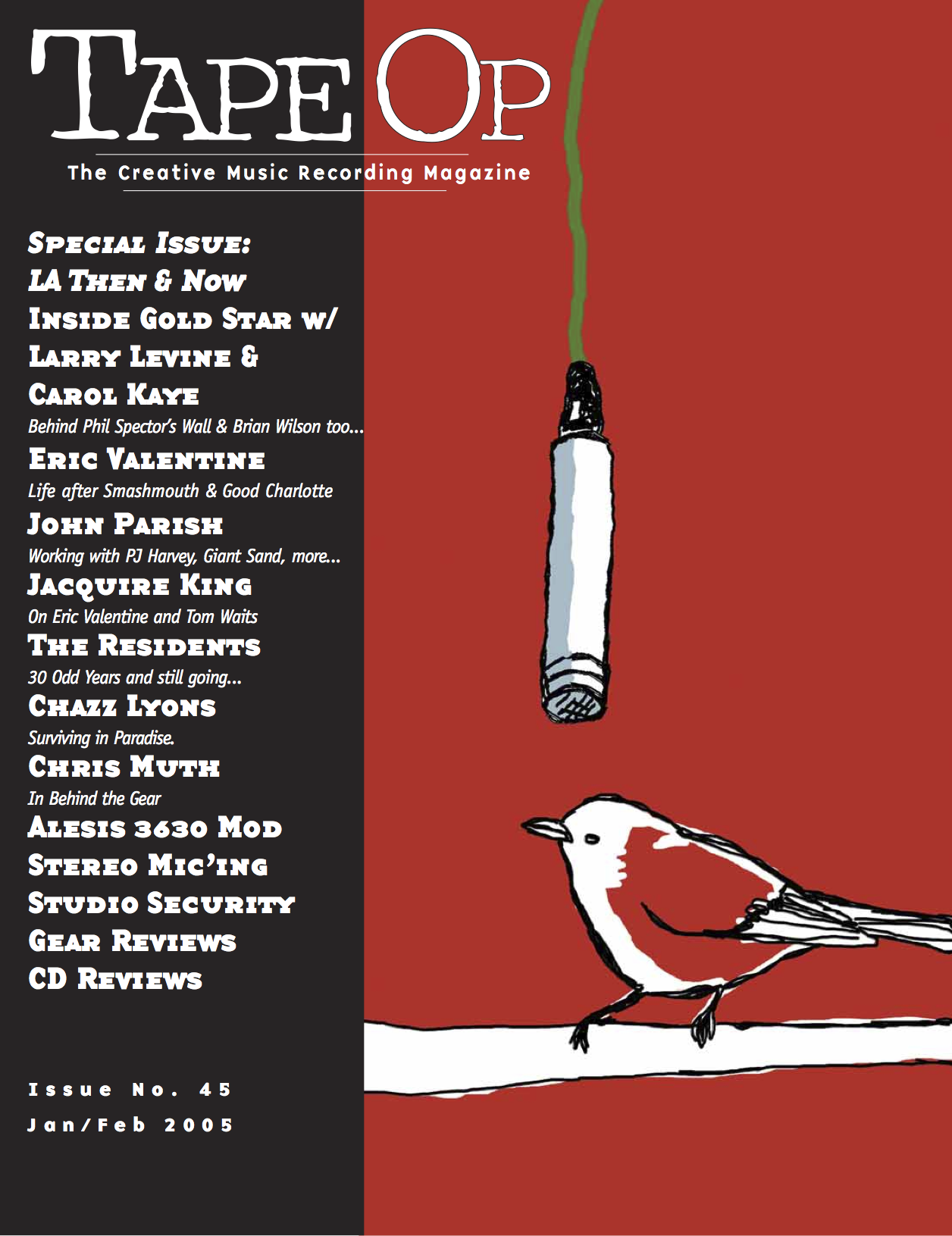 Last issue I wrote this intro page while visiting Amsterdam and hanging out at The Paradiso. This issue I'm sitting on a plane while heading to New Orleans to mix some songs I started with Big Blue Marble (and to mix some others they've tracked as well). Since last May I've been thinking a lot about what I want in a career in music recording, and I'm slowly working it out. There have been times where I felt like I was almost on an assembly line — rock bands coming in one after the other with me trying to do the best job I could given what they brought in as songs, arrangements, talent and gear. I've pulled back from that, fielding many of the calls I've gotten at my studio to other engineers while taking on things that interest me. Last week I recorded a quartet of Tongan ex-patriots doing traditional "island" music with guitars, ukulele and sweet harmony voices. I thought it would be interesting, and a different challenge, and it was — especially having to track, overdub and mix 12 songs in 9 hours! The next day I worked with an old friend, Sean Croghan, who I've done several albums with before. It was fun and creative — only tackling the tracking and rough mixing for one song we came up with cool sounds and arrangements that we were both real happy with. And now I'm off to work with a band in New Orleans that I really like (musically and as people), in a funky studio with a resident cat (and engineer). I feel like I'm getting close to a career that won't burn me out (I hope) and will keep me interested in music recording for a long time. Wish me luck!

P. S. Some folks might think, "Of course Larry can pick and choose projects." But, this is the first time I've really been able to do this, after ten years of "charging" for recording and eight years of owning a studio. And just so you know, at some points I am turning down work when I need the money — I'm just trying to keep my sanity and find time to work on Tape Op as well. I feel like I'm barely getting by and that makes me nervous!

P.P.S. Right as we went to press, Quantegy closed their tape plant. Rumours and truths are flying, and almost the entire stock of recording tape in the USA was sold in two days. Will tape remain only as an anchronistic word that's part of the title of this magazine? We don't think so, and we'll keep you posted in future issues as things develop. 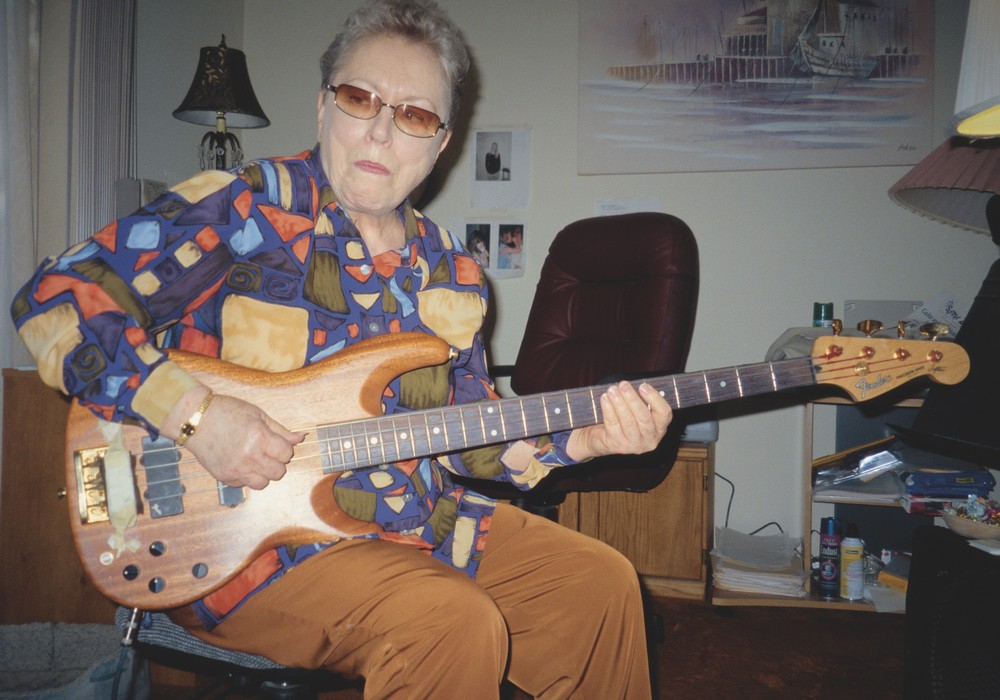 John Parish is a well-respected musician and producer. He has made records for and with PJ Harvey, Sparklehorse [Tape Op #12], the eels, Giant Sand, Dominique A and Tracy Chapman, to mention a few. In...

For over thirty years, the legendary, prolific and influential art group known as The Residents has been making interesting rock 'n' roll, pop and symphonic music and films that are never old. Their...

Anatomy of an Issue

Larry gets a break this month, as this issue's 'End Rant' is a behind the scenes peek at how this magazine gets put together every two months. In a nutshell, it's organized chaos and this issue...

You may have noticed from reading the last few issues of Tape Op that we have a soft spot in our hearts for vintage synths, with interviews of Malcolm Cecil (keeper of TONTO), Bob Moog, and Larry...

The DD-2 K-Stereo Processor is referred to as an "ambience recovery device" in literature and on the Digital Domain website. The brainchild of mastering engineer Bob Katz, the DD-2 is built using...

Drops in the Bronx Vol 2

In true DIY style, UK-based engineer/producer Mike Pelanconi has been building up his Drum Drops catalog via word of mouth over the last few years to become the premier online source of top quality...

The VAC-6c pop screens provide a unique solution to the "How do I tame those damn plosives?" dilemma-you know, the overbearing "P" sounds that create huge low- end peaks on vocals when mics are in...

The Folcrom RMS216 is a 1RU passive summing unit with standard D-Sub connectors providing 16 balanced inputs on the back and two XLR connectors for balanced outputs. Each input can be assigned to...

Before I built up my own studio, I used to carry around a portable case with original Neve 1272 and API 312 mic preamps that Brent Averill Enterprises had racked for me. These now sit permanently...

I've been a big fan of Radial Engineering ever since Pete Weiss reviewed the JD7 DI and amplifier interface in Tape Op #38. Radial makes great problem-solvers for both the stage and studio, and their...

by Gefell  |  reviewed by Andy Hong

Recently, I was asked to record a private concert featuring acclaimed cellist Yo-Yo Ma and pianist Paul Cantelon (who is also an accomplished violinist and composer). The concert took place in a New...

This inexpensive 25-key MIDI keyboard was a perfect solution to a small problem in my studio. Virtual instrument plug-ins are getting better and better these days, particularly some of the ones we've...

The B4 has been one of my most regularly used and cherished VST plug-ins, so just for the sake of nostalgia, I took a look back in the archive of Tape Op reviews and saw that my original review of the...

by Mackie  |  reviewed by Craig Schumacher

As most people know, Mackie has become a leading manufacturer of affordable audio products. The company is perhaps best known for its great line of simple but clean- sounding mixers. The company has...

by Soundelux  |  reviewed by Craig Schumacher

David Bock is very serious about microphone making. In ten short years, he's built up a reputation as a builder of some of the best sounding mics you can buy. His primary focus has been on...

by Focusrite  |  reviewed by Jeff Robbins

I have to admit to a certain amount of amazement when I first plugged in the ISA 430 MkII and heard what was coming through my speakers. There was that clarity and professional sound that I had been...

The name Geoff Daking has become synonymous with quality-built, great-sounding studio recording gear. He is well respected for his FET Compressor II, Mic-Pre/EQ, and custom consoles. He recently...

What is this box? I've had it for almost a year, and I'm still not sure how to answer that. For one, it's basically two channels of tube circuitry that can be run in normal or overdrive modes. The...

by Earthworks  |  reviewed by John Baccigaluppi

One of the coolest things I saw at the AES show this past October is this little inline XLR barrel that's both a pad and EQ designed for kick drum mic'ing. For rock drums my go-to scenario is an AKG D...

First off, a story: I was tracking some songs in New Orleans this summer, and Dan Kennedy of Great River was cool enough to send me this new EQ to the studio I was at; plus, he sent one of his MP-2NV...

Finally, someone has introduced an affordable DAW controller that has enough faders and virtual input strips that it can handle a typical record/mixdown session and feel like a real mixing...

When Larry Crane emailed me about reviewing the Groove Tubes VIPRE, I was very excited. I had used this unit when it was first introduced several years ago but never had an ample amount of time to...