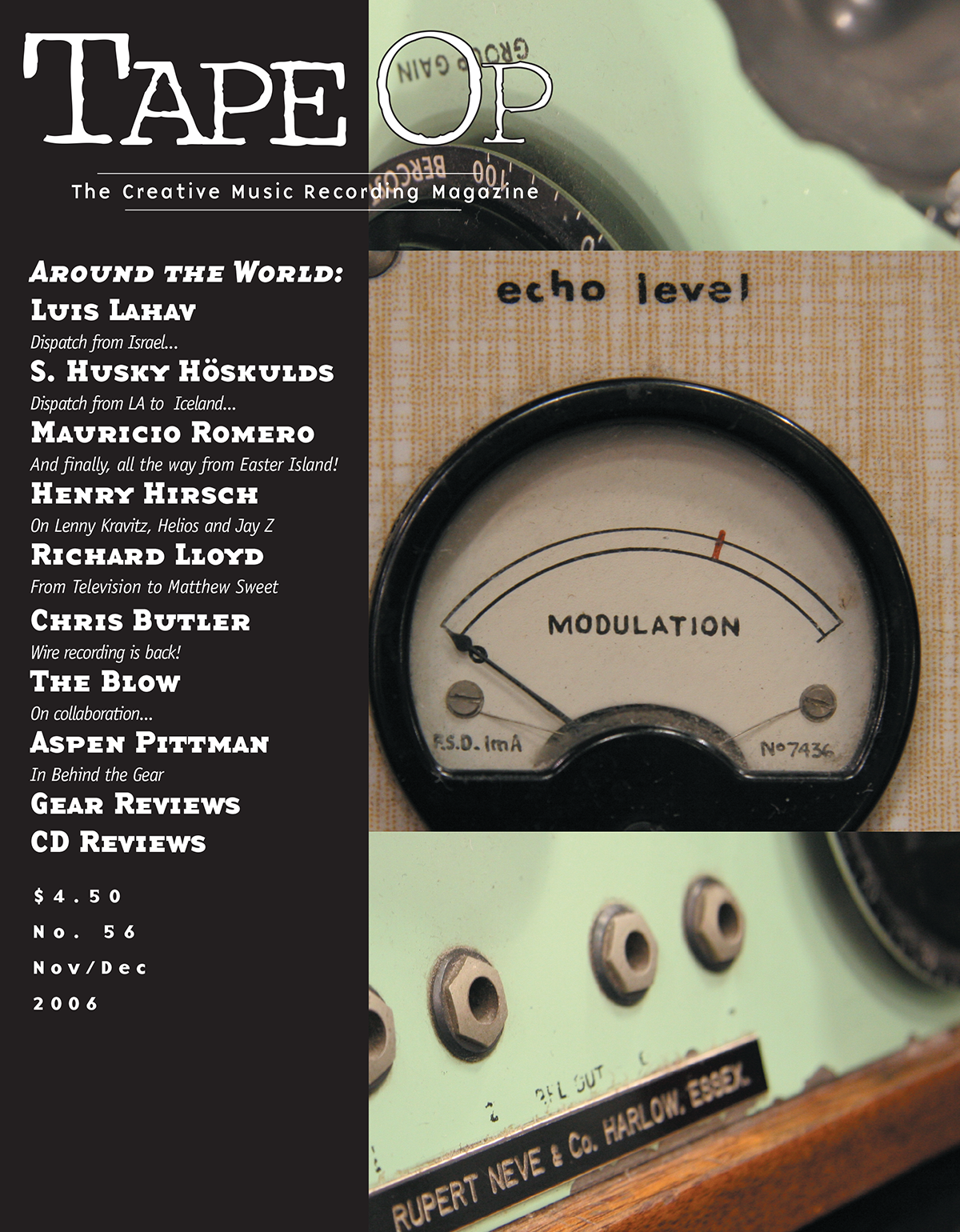 We are all human, and our love of music is usually what draws us all into the world of music recording. Music crosses many boundaries — we don't need to know what words Ali Farka Toure was singing in order to feel something. We also don't care what color someone's skin is, or what nationality they might be when we love their music.

I just finished reading a book, Fools Rush In, written by a friend of mine, Bill Carter. In this book Bill shares his memoirs of time spent in Sarajevo while the city was under siege. It's an amazing journey, but what Bill does best is show us that the people trapped in this city are like you and me — people with creative pursuits (painters, musicians and others), business owners, families and children — all of whom are deeply affected by their situation. When you hear of wars in foreign (to you) lands and you think of them in the abstract, like the way one might think of sports teams, or you register it as just "more news", remember that these places are full of people like us — creative people fostering other creative people and themselves to do and capture their best work — and this part of their lives may be on hold due to the decisions of men in power — sometimes their lives might even be threatened.

This world isn't a simple place, but being able to imagine yourself in another human's situation can sometimes be the most compassionate thing to do.

The world is a big place as well. In this issue of Tape Op, three of our feature articles are on engineers outside of the USA, or even the UK, the 'other' most reported music scene in the world.

Hope you enjoy the issue,

A note about the front cover: The photographs on this month's cover is one of the first Neve consoles manufactured in 1961. The console was all tubes, or valves as they say in the UK, and is stuffed with old Mullard 12ax7's. Although we don't normally run 'gear shots' on the cover, Brian Charles' photos of this early handmade console just looked so cool, we scrapped our existing cover and ran with these instead. Below are two alternate covers we toyed with before settling on the three photos we juxtaposed for the cover we ran. Thanks to Brian and AMS/Neve who brought this over from the UK for the recent AES show. -JB

Henry Hirsch is best known as Lenny Kravitz's collaborator and engineer. The partnership has continued for twenty years and is as strong as ever. What started as a session booked with Lenny's band at...

Chris Butler, a Cleveland native living in Hoboken, New Jersey, is known as the pen and the guitar behind The Waitresses' eighties' classics, "I Know What Boys Like" and "Christmas Wrapping". He was...

I own Jackpot!, a recording studio in Portland, Oregon. There are many other recording studios in this town, including Kung Fu Bakery, Supernatural Sound, Smegma, Type Foundry, Dead Aunt Thelma's,...

Elsewhere in this issue is my review of the Groove Tubes MS encoder, which was designed to be an M/S to L/R encoder for recording with Mid/Side microphones. The Sonic Orbit accomplishes the same task,...

by Zoom  |  reviewed by Mark Weissburg

This latest entry into the portable recording market tries to be all things to all people. The H4 is first and foremost a lightweight, field stereo recorder. Its built-in electret condenser mics are...

Subtitled The Studio Equipment and Techniques Used to Create Their Classic Albums, this 540-page hardbound book arrives in a pseudo EMI tape box and is heavier than a 2" reel of tape. It has three...

by AEA  |  reviewed by Mike Caffrey

When I first pulled the R92 out of the box, I was shocked at how light it was. In fact, my first reaction was disappointment because I have such a strong association with heavy being better. Once I...

Here's something that all of us could use-acoustic treatment that's portable, adjustable, affordable, and extremely easy to set up and use. The Reflexion is an arc-shaped acoustic filter that...

Love 'em or hate 'em, digital guitar amp simulators and modeler plug-ins have become a big part of our lives. While we all love the convenience and versatility of amp simulators, none of us feel...

by Secrets of the Pros  |  reviewed by Andy Hong

This DVD pretty much saved my ass on a recent Pro Tools project that required way more editing than actual mixing. Let's start by saying that I'm not really a fan of PT, despite being an ex-employee...

If gear design were a sport, I'd be calling for steroid testing of Wade Goeke, as he seems to hit a home run every time he's at bat. I don't think it's an exaggeration to say his Germanium Tone...

In last issue's "Gear Geeking" column, I mentioned how producer and Tape Op contributor Thom Monahan (Devendra, Vetiver, The Pernice Brothers, The Capital Years, etc.) turned me on to the plug-ins...

Lately, legendary audio innovator Bob Heil has become more well-known for his institutional sound reinforcement and broadcast products than for creations such as the Heil Talk Box and Grateful...

While appearing on a couple of radio shows at two different studios, I found myself amazed by the sound of my voice through two well-known broadcast mics: the Shure SM7 and Sennheiser MD 421. I'm a...

For my next project on the RADAR V, I recorded local artist Backseat Radio at 192 kHz. We multitracked "Throat", a guitar-driven pop tune with Wurlitzer, Syndrums, additional guitars, and vocals...

by Shure  |  reviewed by Garrett Haines

All I want is a stereo mic adapter that's solid, flexible, and reliable. There are some expensive ones out there, but I want one I can count on for live work or rowdy punk bands. I was going through...

This past summer, I helped mix Nedelle's latest home-recorded album at JB's Hangar Studios through his Neve broadcast console onto tape. On the morning of the first day, John strapped a Thermionic...

I've learned to really respect John Peluso-designed microphones. John Peluso too. He's taken the plunge into ribbons with his brand new R14. He's not new to ribbon technology however. He's been...

by OktavaMod  |  reviewed by Joel Hamilton

Let me start this rant of a review by saying that endeavors like this one warm my recording heart. I love it when I meet someone that loves recording as much as I do, and in this case, the expression...

by Cherry  |  reviewed by Andy Hong

I've been a computer geek for 27 years now! Yikes! And during that time, I've gone through many computer keyboards... from IBM mainframe terminals to fold-outs for Pocket PCs... and everything in...

Phillip Victor Bova, along with his wife Janet Kirby and their son, Philip Shaw Bova, have a recording studio called Bova Sound in Ottawa, Canada, and their company Sage Electronics makes wonderful...

by RME  |  reviewed by Garrett Haines

This is one of those "why didn't they think of this sooner?" devices. If you use any type of DB25 connections-analog or digital-in your studio, you need to check out the BOB-32. Personally, I hate...