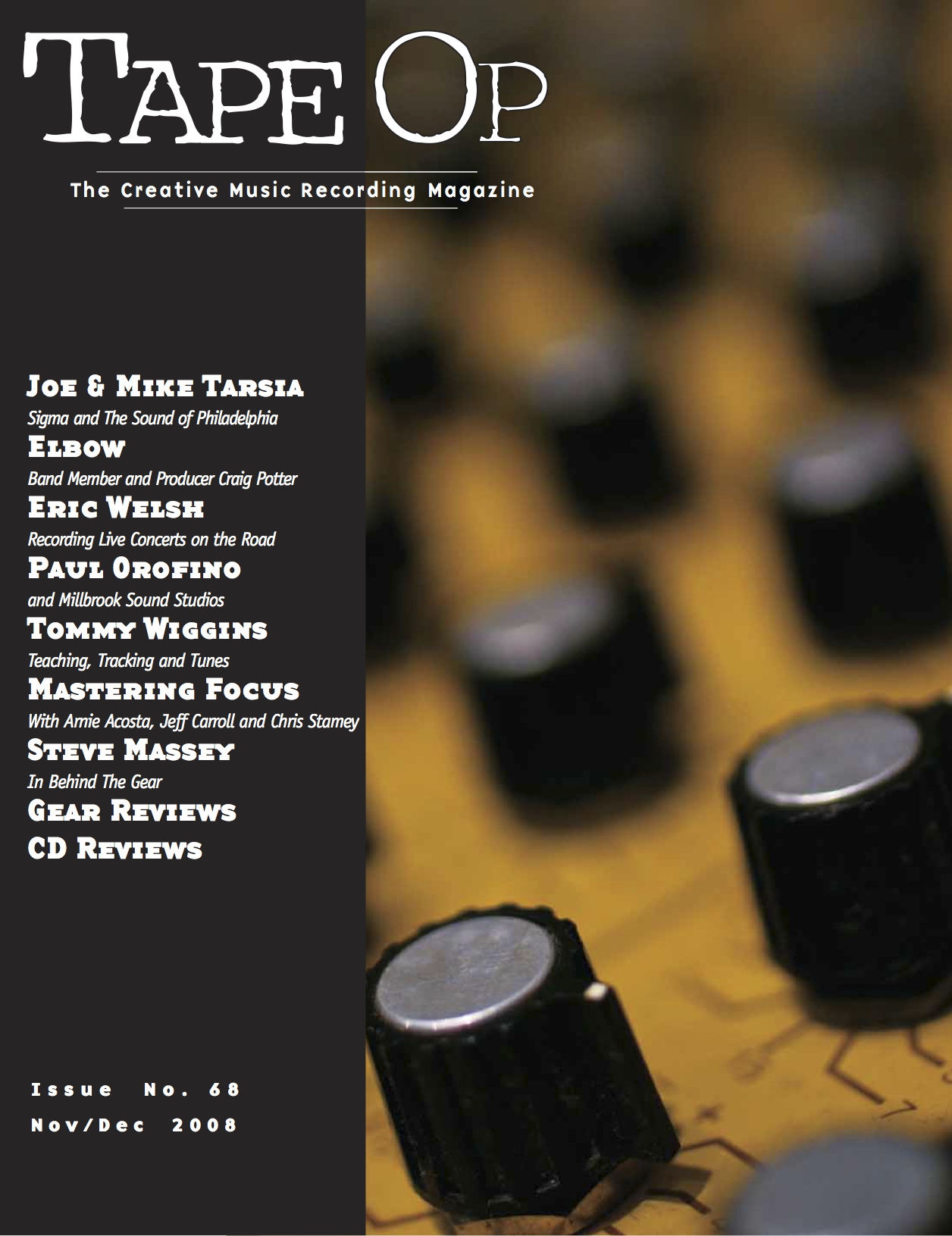 Okay, let's get this straight:

Last issue I wrote an End Rant entitled "Purity and Honesty in Recordings." In this piece of over-the-top, satirical writing, I attempted to lampoon the idea of creating a set of impossibly tight-fisted, analog-based rules to be imposed on others during the recording process. Unfortunately, despite my attempts to make this piece come off as ridiculous as possible, many people took it as a serious statement of intent. I was shocked and amazed that anyone reading this would think it was a real set of rules, especially given that I proposed a system of certification from which Tape Op would financially benefit! Yikes. No way.

Are there any rules that should be adhered to while recording music? Sure — I find myself placing limitations on aspects of every album I record and produce. But these are self-created rules to help focus the project at hand, and even these rules get tossed out at times in order to achieve what needs to be done.

Should anyone impose his or her own rules on others who are involved in the creative process of recording music? I would hope not. The variety of recording equipment and the techniques used to help capture and create this art form should be left as wide open as possible. Anyone who feels the need to tell others that they are "recording the wrong way" is so full of shit I don't know where to begin. When we interview someone and they have something to say about how they like to record, are they inferring that others are working in lesser ways? A number of people wanted to point out that T Bone Burnett's "rules" seemed as ridiculous as my satirical ones — I completely disagree. I feel that his thoughts and processes are generating results, and in no way does T Bone come across as someone who expects others to only work in his manner. Sure, someone like Steve Albini may have a seemingly strict methodology in the studio, but he ain't out there telling anyone to follow his rules. See our "Letters to Tape Op" for various thoughts on T Bone's interview from last issue.

Keep everything as wide open as possible in the creative process, and then define your project with any limitations and rules you feel will bring the best results. We all have a myriad ways of recording audio and making records, and that is why we can fill issue after issue with interesting people making interesting music.

PS: At the time I was receiving the initial confused and accusatory responses to "Purity and Honesty in Recordings", I was also beginning the first sessions for a "solo" album at The Hangar in Sacramento, CA. Ironically enough it's being recorded in Pro Tools with lots of editing, nudging, plug-ins, drum triggers and plenty of processing. In fact, you'll see later as I report more, this record would be very expensive and more difficult to do in the analog realm. I used the tools best suited for the job — in my opinion!

The outcry over the un-listenably loud level of Metallica's Death Magnetic CD has become one of the more visible occurrences of the "loudness wars" in the mainstream media. This has been a problem...

Here's a roundup of some of the products I saw at the annual AES show that piqued my interest. Digidesign unveiled the Beta version of Pro Tools 8. Earlier this year, I sent my contacts at the company...

As a radio station primarily interested in close-mic'ed, live-in-the-studio recording (and also a radio station on a budget), WMBR relies heavily on inexpensive, durable dynamic microphones. While the...

by Grace Design  |  reviewed by

Prepare to be impressed with a single word-transimpedance. What the hell does that mean? I think it's best explained by Michael Grace; refer to "Behind the Gear" in Tape Op #61 (also available on...

EastWest has really made a name for itself in producing great sounds. Its Symphonic Orchestra libraries have set a high standard and are considered a must-have by an enormous number of composers...

Before considering any gear, I like to poke around the web for reviews, articles, and forum activity. I found very little talk of the m902's performance for pro audio applications. Most of the...

by Sonnox  |  reviewed by Garrett Haines

When Sony Oxford released the OXF-R3 in the 1990s, it was one of the most ambitious digital consoles ever. It featured programs so advanced that the company had to fabricate custom DSP chips to run...

by Langevin  |  reviewed by Garrett Haines

I had a Manley Massive Passive. But the tracking guys "borrowed it" for a session. That was over a year ago. I don't think I am getting it back. So, I was excited when I heard Manley released the Mini...

If a microphone helps me learn about how other mics in my collection sound, then it is worth spending time with it for this reasons alone. The KEL Audio HM-2d not only accomplishes this feat, but does...

The SE2200A large-diaphragm condenser (Tape Op #48) is one of my favorite mics. At $300 street, it's easily one of the best deals in pro audio. Up until recently, I also had in my cabinet a matched...

by Algorithmix  |  reviewed by Garrett Haines

Algorithmix, in conjunction with Bob Katz, has released a software incarnation of Digital Domain K-Stereo, a patented process that can extract ambience and depth from existing recordings, allowing for...

by Mackie  |  reviewed by Brandon Miller

When I first heard about the U.420 compact mixers from Mackie, I immediately realized where they would be effective. I asked Mackie to send the U.420d version to my colleague Brandon Miller, who is a...

This could be the shortest review I've ever done. The Komit Treehouse is simple to use, sounds great, and is sensibly priced. If you must have the gory details, read on. The Komit stirred up a local...

The Arsenal line is the new range of gear from API that is more affordably-priced than the legacy API gear. I am always interested in new EQs, so I asked the folks at API to send me a pair of the V14s...

In a digital system, the word-clock signal is used to generate a common time reference amongst all system components. It not only regulates data flow so that everything works together synchronously,...

In a digital system, the word-clock signal is used to generate a common time reference amongst all system components. It not only regulates data flow so that everything works together synchronously,...

by Steinberg  |  reviewed by Andy Hong

I'm afraid that this is an unwieldily long review, and even at its length, I'm only touching on a few of the countless points worth discussing if you are considering Nuendo or its near-identical...

Analog Days: The Invention and Impact of the Moog Synthesizer

This book is as much of a page-turner as you're likely to find in the field of books about audio. It's very well written and the writers are very passionate about their subject matter. While technical...

Everything That Happens Will Happen Today

During the course of the late '70s and early '80s, Eno and Byrne worked together on some groundbreaking Talking Heads albums. Under their own names the two also created one of my favorite records...

by Wire | reviewed by Larry Crane

At under 35 minutes, Wire's usual economy shines as they deliver tight little packages of streamlined post punk on what appears to be their 11th album (depends how you count them). Now stripped down...

I meant to review this CD last issue along with some of the other reader submitted CDs I reviewed. It's probably a good thing that I missed it however as Shotgun Singer is in a class of it's own....

by LAKE | reviewed by Alex Kostelnik

LAKE is the grand doorway to a whole kaleidoscope of minimalist downtempo music. Start with Oh, The Places We'll Go and fan outwards for more member-related projects than you can shake a mossy stick...

My friend Marsha Vdovin from Universal Audio turned me on to this album and I really liked it on first listen. Then I read the credits and learned that most of it was produced by Mike Mogis [Tape Op #...

by Rodriguez | reviewed by Larry Crane

Released in 1970, this is one of those "lost classics" type albums that vinyl collectors freak over and I wait for reissues of. Rodriguez was/is a tough-ass, who comes off like an angry,...

Recorded live off the floor in two days (with minimal overdubs) at Fantasy Studios [Berkeley], this is Victor's "musical wake" for the passing of his father and stepfather. Imagine gathering your...