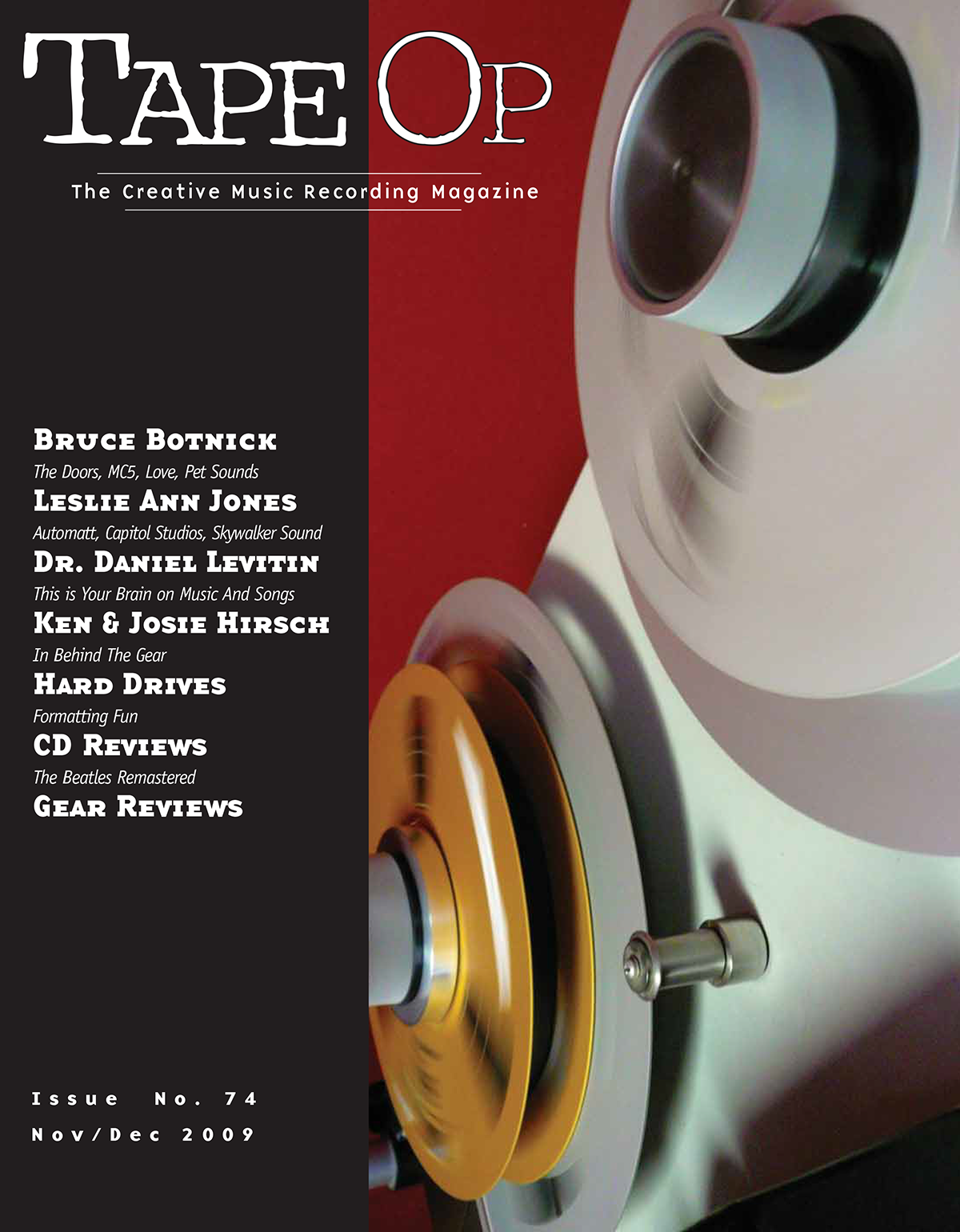 I sometimes wonder why all of us find the art of music recording so fascinating. Maybe the answer lies in the thoughts of Dr. Daniel Levitin, interviewed this issue. Daniel previously taught a course on Technology and Musical Aesthetics (with Bob Adams) at Stanford University. They determined that the two biggest advances in music had nothing to do with instruments or composition, but instead were the evolution of notation and the development of audio recording.
In Daniel's words from his book, The World in Six Songs: "The innovation of recording... fundamentally transformed the way people thought about performances. A song could be performed only once, and that exact performance could be played back over and over again... played in places the performer wasn't... Recording introduced the idea of a 'master performance,' a single, canonical, iconic version of a song. Recordings have become their own distinct aesthetic objects." Maybe it's this desire to be involved in the capturing of an iconic, recognized work that drives us all? To be part of creating something that others respond to, adore and enjoy? I think our passion for this multifaceted meeting of art and technology comes from these desires, plus a certain quest for immortality — hoping to leave something in the world long after we're gone that we can be proud of.

PS: Please notice the underlying connections in our main three interviews this issue. Both Leslie Ann Jones and Daniel Levitin worked out of San Francisco's Automatt studios when it was still in business. Leslie and Bruce Botnick have both spent time at the famed Capitol Studios in L.A. — plus they both bring up a love of physical reverb chambers like the ones Capitol has. It's always interesting to me how many relationships we build in this field. Even though it may seem there are so many people creating and recording music in the world, maybe it is really just one big, happy family.

This issue is dedicated to the memory of Penny Crane-Cash.

Over the last few years I've gotten back into cooking at home. Partly this is because we moved from Portland, Oregon to a small town in the desert with few restaurants, but also it's a great "hobby"...

Cascade Microphones (cascademicrophones.com) sent Tape Op a number of ribbon mics to evaluate, so when JB and his crew at The Hangar were asked to set up a remote studio for Devendra Banhart's new...

One might think that Cakewalk's latest hardware collaboration with Roland is the little brother of the V-Studio 700 (Tape Op #72). After all, it comes with a new, "light" version of Cakewalk's...

by The Hook  |  reviewed by John Baccigaluppi

A good pop filter for cutting vocals is one of those easily overlooked tools in the studio. Often an afterthought, a good one makes a great mic even better -and an average mic sound okay. A crappy pop...

by Vintagedesign  |  reviewed by Pete Weiss

Over the years, there have been a variety of tried-and-true compressor/limiter circuit types. For example, VCA was used in the classic dbx 160, FET in the UREI 1176, electro-optical in the Teletronix...

by TASCAM  |  reviewed by Dana Gumbiner

TASCAM has a new entry into the increasingly crowded handheld recorder market -the DR-100. This new unit has a number of clear advantages over TASCAM's less expensive (and slightly less bulky) DR-07...

Germany-based Vertigo Sound's first product to market is the VSC-2 Quad Discrete Compressor. The quad part relates to the four VCAs within the VSC-2 and not the number of channels it can process, as...

by Kinman  |  reviewed by Allen Farmelo

When people come to me to record, I always have guitars and amps that I know sound great mic'ed up and ready to go. Guitars have to have great tone, playability, solid intonation and -if I can achieve...

by ART  |  reviewed by Garrett Haines

ART's Pro VLA (Tape Op #37) is one of the best compressors ever made at its price point. You can pick one up new for under $400. It's an electro-optical compressor with a 12AX7 tube gain stage. You...

by Apple  |  reviewed by Andy Hong

Dana Gumbiner and I both took on Logic Studio for this issue. Dana's opinion follows mine. -AH When Apple unveiled Logic Pro 8 (Tape Op #63), the high-performance audio engine that was the highlight...

I don't think I've ever started a mic review by introducing the accessories first. But given the innovative design of the shockmount included with the sE4400a, I can't help but get that out of the way...

by AKAI  |  reviewed by Dana Gumbiner

Akai Professional and Ableton have co-developed a new comprehensive MIDI performance controller for use with Live versions 7 or 8 (Tape Op #72). The APC40 introduces a new breed of USB-MIDI devices...

by The Beatles | reviewed by Jeff Slate

I received my copies of the new remasters of The Beatles' catalog in the midst of the media frenzy that was 9/9/09. After all the hubbub died down and I'd had time to think about it, I realized there...

Have a Holly Raleigh Kidsmas

Every year Jeff Carroll at Bluefield Mastering sends me a really cool comp CD of Christmas music from Raleigh NC area artists that usually gets to me about three days after our Nov/Dec issue has...

by The Mumlers | reviewed by John Baccigaluppi

I was fortunate to work with The Mumlers on their last album, Thickets and Stitches, doing some pinch-hit vocal overdubs before frequent Tape Op contributor Thom Monahan mixed the record at The...