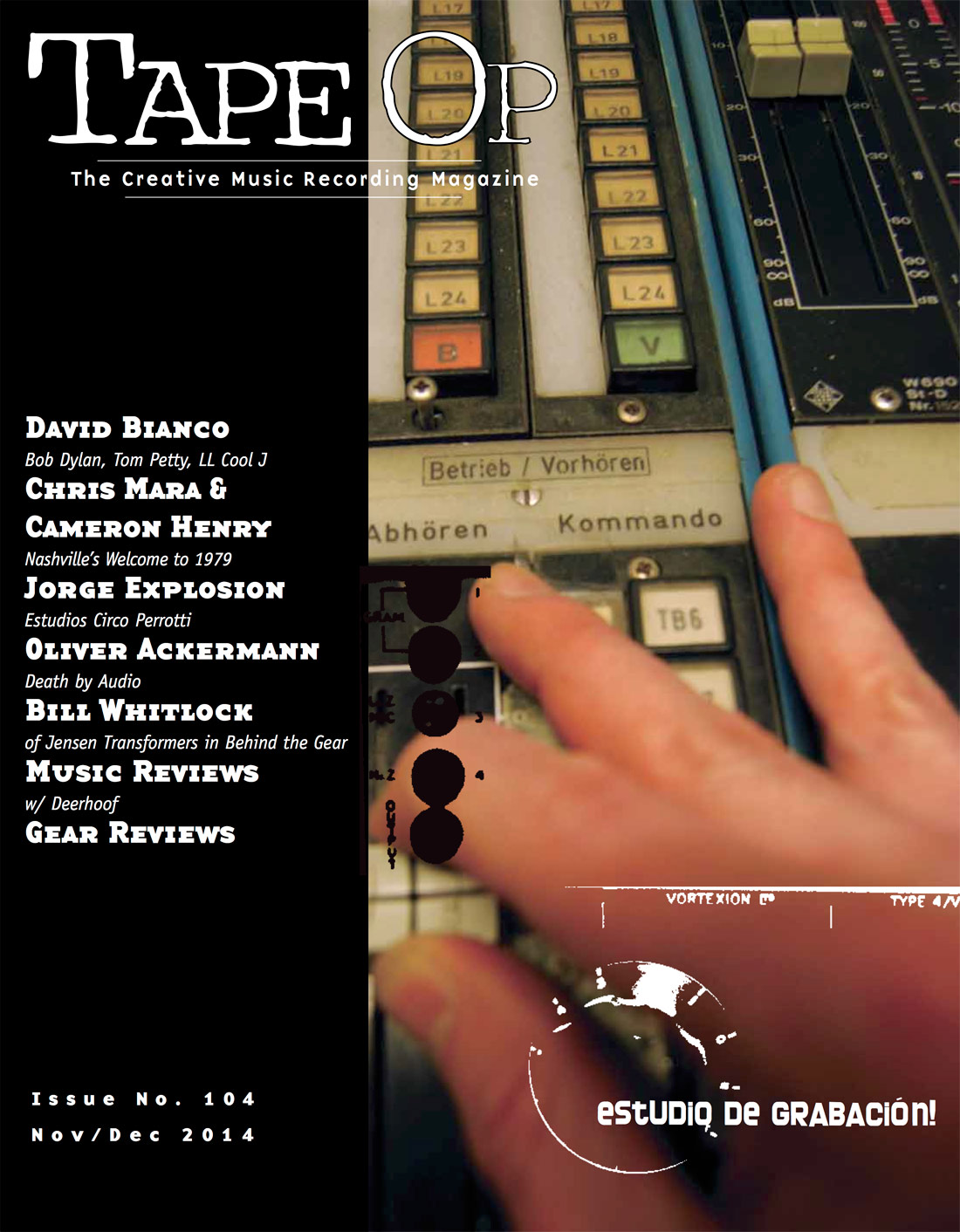 Every two months I have to pull myself out of the studio and take some time to put together an issue of Tape Op. In many ways it's a nice break from constant sessions, plus poring over the interviews and gear reviews for an upcoming magazine makes me excited to return to the studio. The burnout factor in the recording world is real. I've considered, many times, running an article where we only interview folks who have decided to quit music recording as a career, if only as a cautionary tale for the rest of us. For myself having this variety is key, and I find that many "lifers" in this business end up with parallel career paths. In this issue Oliver Ackermann exemplifies this lifestyle, running a stompbox company (Death By Audio), recording bands, in addition to performing and touring with A Place to Bury Strangers. Chris Mara runs a Nashville studio that also features vinyl mastering, rebuilds analog tape decks, and puts on many events. Jorge Explosion produces sessions at his studio in Spain and fronts his band, Doctor Explosion. I'm convinced that everyone wears several hats in this biz. I'm sure of it.

I've pulled together a collection of recent thoughts I've had about the recording process. You can agree or not agree. The important thing is to use your ears, mind, and creativity to make great...

This past September, I attended the inaugural A3Exchange (www.a3exchange.com) in Boston and had one of the most enjoyable conference experiences in years. A small team of forward thinkers, under the...

by CalDigit  |  reviewed by John Baccigaluppi

If you, like me, have recently moved to the Thunderbolt computer interface platform, these two products may be of interest to you. I recently sold my Avid TDM hardware in favor of a Universal Audio...

by Triad-Orbit  |  reviewed by Garrett Haines

Triad-Orbit is a new brand of professional microphone stands from Access Products Group, a company that has been designing and producing products for other market leaders for over twenty years. The...

by Audient  |  reviewed by Andy Hong

In a majority of cases, the absolute worst motive for undertaking a DIY electronics project is "cost savings." Gear builds are gratifying for a number of reasons, but factors like economies of scale...

by Softube  |  reviewed by Eli Crews

The first thing one notices about Softube plug-ins is that the graphics are kinda stunning. Now, I'm not foolish enough to think that skeuomorphic precision and meticulous shading are going to make...

In today's boutique audio market, variable-mu designs have become very popular after the rediscovery of such classic units as the Fairchild 670, General Electric BA-5-A, and Gates Sta-Level. What...

Let's paint a picture. If you are new to painting, let's paint by numbers. If you have been at it awhile, let's explore and start mixing our own colors and use more than just a paintbrush to apply...

If you do any audio processing in the analog domain, whether you rely on a large-format console or just a modest rack of gear, you'll realize quickly how powerful and easy-to- use these half-width,...

I am a fan of the 500-series format, but each time I see a new module enter the fray of over 200 different modules, I have to wonder what makes this one special. Phoenix Audio produces high quality,...

I've had a pair of ADAM S3-A [Tape Op #33] powered monitors for about a decade at Jackpot! Recording Studio, and they've treated me well. I had been through a number of speakers before them, and in...

by Deerhoof | reviewed by Larry Crane

In issue #55 we chatted with Deerhoof, and learned about Greg Saunier's unique and obsessive ways of working on recordings. Their new album, La Isla Bonita, began as demos that soon became the core of...