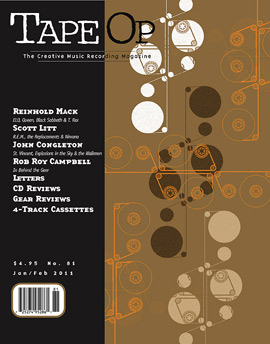 Fourteen years ago I opened up my first commercial studio space. I moved out of my home basement studio into a small, rented building down the road. Looking back, it's simply staggering to think about the changes in recording that we've all encountered over these years.

I just finished mixing an album for a group, My Sad Captains, from the UK. The album was recorded with a small amount of portable gear and a computer in a barn in Cornwall. They mailed me (in a small envelope) an entire album's worth of audio files on a small USB flash memory drive. I edited and prepped the album at home using Pro Tools in my office on a laptop, and then dumped the sessions onto a tiny, portable hard drive and hopped on a plane. (Remember having to lug three or more 2" reels of tape around back in the day? And being afraid to check them with your luggage?) When I got to Portland I started mixing with a hybrid of analog and digital gear. When a mix was finished I would email the band a link to download their mix. We'd pass ideas back and forth via email for a bit, and then wrap up a mix (as they stayed up into the early morning). Five days later the album was done. I emailed an invoice and the band placed money in my Pay Pal account.

None of this would have been possible 14 years ago. I probably would've never even been considered for the job.

Four Tracks and an Attitude

As a teenager in 1985 I slaved away all summer as a prep cook to buy a $500 Tascam Porta One 4- track cassette recorder. I proceeded to do what a lot of musicians of my generation did: record like...

I travel a lot — enough that I've been awarded a lifetime Platinum membership with American Airlines for flying two million miles, and I recently converted my Amtrak points into $2000 worth of...

by Avid  |  reviewed by Allen Farmelo

Converters and clocks are hotly debated topics, and it’s been my opinion for a while now that the reason they’re such sore topics is that people are often trying to establish objective and...

I’ve said it before; I really like being in audio production right now. There is a seemingly endless supply of small manufacturers that are bringing innovative products to the market. This is...

Do you love analog synthesis? Great, let’s nerd out on Control Voltage for a bit. CV is essentially the analog equivalent and predecessor to MIDI. It’s a tried and true method used to...

Here I am, Tape Op’s Gear Geek, butting into an otherwise enthralling review from Joel Hamilton. After reading Joel’s draft of this review of the Yardstick, I asked him to send me the unit...

Like it or not, bands view audio engineers as subject-matter experts when it comes to “the music industry.” And while you probably don’t mind providing pointers and suggestions,...

by Avid  |  reviewed by Andy Hong

A couple months before the official unveiling of Pro Tools 9, Avid shared with the press that it was implementing significant changes to its customer value proposition. We were given a few sparse...

This “matrix based modular synthesizer” softsynth, based on the EMS VCS 3, was an impulse purchase for me on AudioMIDI.com’s eBay store – one of their “No Brainer”...

Frames of Mind, Boundaries of Time, Looking for Anything, Release, Razzmatazz

In 1985 my pal, Jane Rovente, and I were the music directors of KCSC - a small college radio station in Chico, CA. We used to go to the post office, pick up the bins full of promo LPs in their...