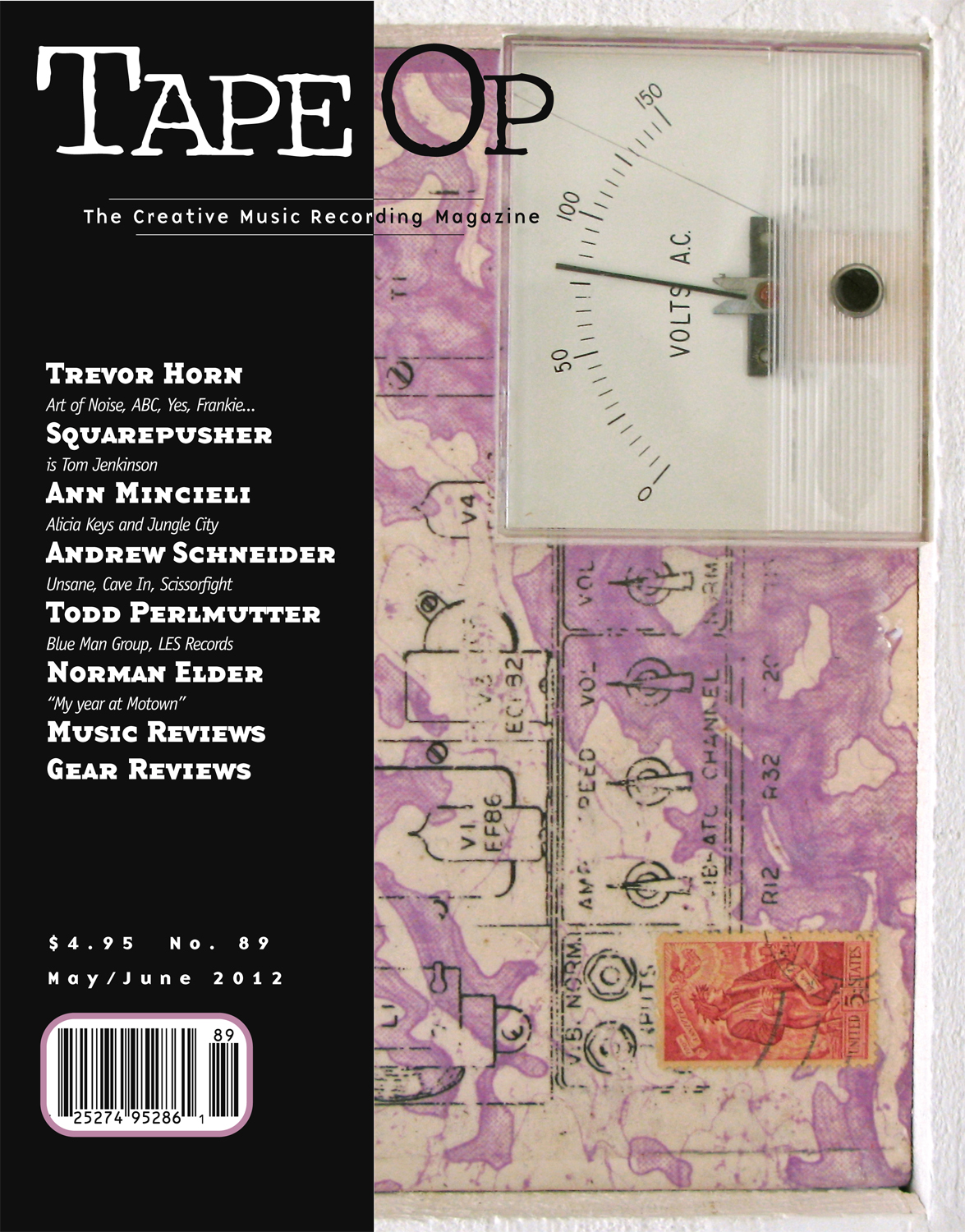 People often mistake what the art of recording music actually is. Learning how to choose and set up a microphone is simple. Gain structures should be obvious, once you learn the basics. Recording software is prevalent and the rudiments are easy to grasp. Hell, even tape deck calibration can be picked up in an afternoon. These are all basic skills one can learn in school or read about in books.

But I think the true art of day-to- day record making is being able to solve problems as they present themselves. Steve Albini mentioned this recently in Tape Op #87: "I'll have a way of getting through the problem." This is the real skill that we bring to recording sessions and we all have our unique ways of solving problems.

I recently had a string of days that made me reconsider this aspect of my work:

Tuesday: I was tracking an album's worth of drums (to pre- recorded metronome/vocals/guitar) during a one-day session. The drummer was prepared and competent, but one song just wasn't gelling. It seemed to me that if he heard the (missing) bass line, the song would come together for him. The solution was to grab the bassist, plug him into a DI and record him along with the drummer. The take came together right after that.

Wednesday: We wanted to track an electric guitar in stereo, but there was a weird crackle in one amp. We swapped it for our Magnatone but the problem persisted. The guitarist went home and grabbed his Fender Super Reverb. However, after the final take, we still heard an odd crackle. During the mix I decided to put a SansAmp plug-in on the track and the noise cleared up.

Thursday: We wanted more control over the frequency balance of the mono output of an old Hammond analog drum machine. We solved it by running the DI'd output through a cheap crossover and printing the low and high tracks separately. It totally helped.

A great engineer/producer brings a huge bag of tricks, all gathered from previous experiences, to every recording session. All of this gained insight is what we offer, and in my mind the technical end of record making is only one part of any successful project. Learning everything one can about gear is important, but at in the end problem solving is what ultimately gets things done.

I Have a Credit Problem

Over the last few years we've seen an explosion of online music services. Pandora, iTunes, Spotify, Rhapsody, Soundcloud and dozens of other platforms are touted as groundbreaking ways to deliver...

After reading Brad Kelly's review of the Flents Flitemate earplugs (Tape Op #86), I ordered a pair for myself. I tried them in several different applications, but I wasn't excited as Brad was; in my...

I'm often asked by clients and artists I work with, what good, inexpensive recording interface I recommend. I used to recommend the Mbox, but the USB C400 is my new choice. I was looking for something...

by Eventide  |  reviewed by Eli Crews

Sitting down to write this review, I feel a little overwhelmed. Honestly, the notion that I can fully quantify and qualify this plug-in bundle in this short amount of space is yay short of giving me...

A little over a year ago, I asked three other writers to contribute to a four-opinion review of Pro Tools 9 (Tape Op #81), which in my mind, was the most significant upgrade to the venerable DAW in...

If you have any open slots in your 500-series rack, the PowerPre should be on your shortlist of preamps to consider. Like other products from Radial Engineering, the build-quality is top- notch, and...

The number of audio and music-related iOS apps has exploded lately and so has the need for ways to get sound in and out of the iPhone, iPad, and iPod Touch. There are a good number of such interfaces...

These are four-band sweepable-frequency EQs with 12 dB per octave high and low-pass filters. I've been using these EQs for over six months now and have had a hard time finding the right slant to write...

by Mountainking  |  reviewed by Al Lawson

When I first heard about this pedal, I was told that it was used all over the recent OM and Shrinebuilder albums, and it was claimed to be the heaviest sounding fuzz pedal ever. I was interested to...

Let me preface my statements here with a general note that everyone's heads, ears, and ear canals are shaped differently; therefore, everyone will hear a set of headphones differently. With that said,...

Building on the success of the original Duet, while taking into consideration customer feedback, Apogee has set a new standard in A/D conversion for home and project studio with the Duet 2. Simply...

Chandler has created a strong following in the niche market of vintage-inspired preamps, compressors, and tone-shaping tools. Wade Goeke has derived modern tools from the original components and...

Roger Schult had a very interesting idea. His mastering equalizer, the UF1, which he calls an Aural Editing System for Mastering Environment, has been getting rave reviews from the few people lucky...

by iZotope  |  reviewed by

by Death By Audio  |  reviewed by Alex Maiolo

To Oliver Ackermann, "Death by Audio" means a lot more than meeting one's demise by sonic annihilation, though that does indeed seem to be part of the deal, judging by the sounds his pedals emit....

What Kind of World

In Tape Op #82 I picked Brendan's brain about his thoughts and experiences with recording. Here he drops his fifth solo album, this one recorded at the decidedly retro-ish Welcome to 1979 Studios in...

As a recording engineer I can't even count the number of albums I've worked on where my participation didn't end up on the final album - hell, some records never even came out. I'm by no means saying...

by Kitty, Daisy and Lewis | reviewed by Larry Crane

by The Black Keys | reviewed by Larry Crane

I just sat through several hours of SiriusXM's "The Coffee House" radio station while I was grabbing some Internet and espresso at a tiny café. The endless parade of shitty cover songs,...

In Tape Op #76 I interviewed drummer, producer, engineer, songwriter Alan Evans of the band Soulive. He's recently formed this ready- to-tour combo to record and play a batch of his new tunes. Wanna...

With a name like Intergalactic Spiral you know it's going to be a journey into [sonic] space. Think Stomu Yamashta's GO project, featuring a little King Crimson and some out there Miles Davis. The...