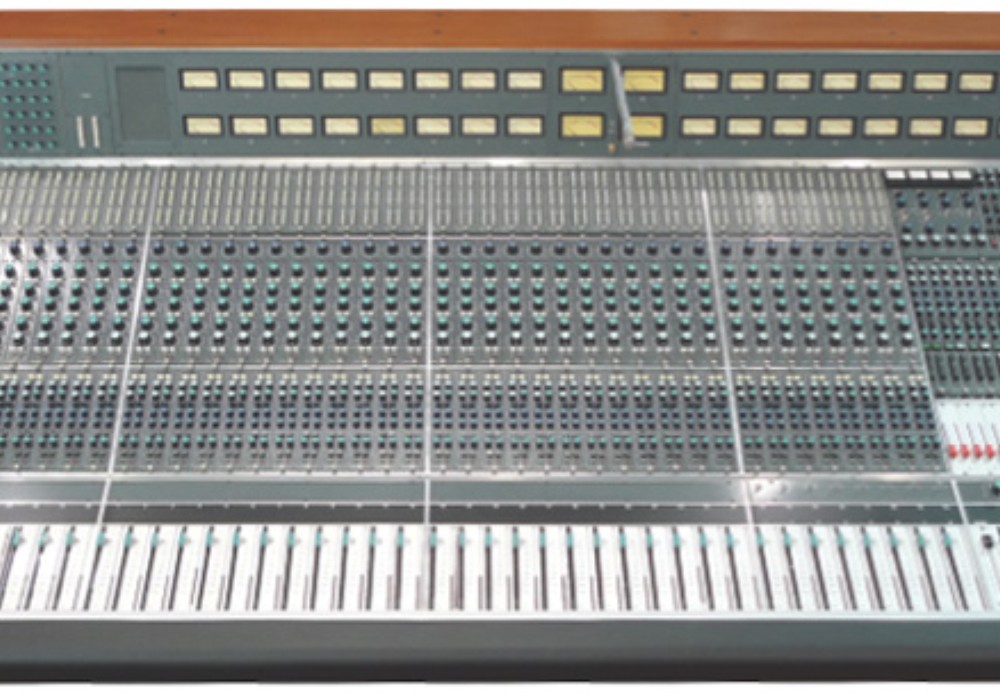 What's the attraction of vintage consoles? There's no denying that a classic console will look incredible in your studio and make a great investment, too. But the real draw will always be the sound. High-quality vintage consoles, such as those from API, EMI, Neve, Helios, Trident, and a handful others, bring an undeniable musicality, color, and attitude to the equation.

Whether you prefer the punchy forwardness of a classic API, the wider, pillowy tone of a Golden-era Neve, or the natural-sounding caress of a vintage Helios, there's a reason these consoles are in constant demand: each one has a timeless, tried-and-true sound of its own. From an application perspective, these types of consoles can make the job of a good engineer surprisingly easier — a far cry from working with many clean, no-personality analog consoles or in-the-box DAW recording methods. Bring up the tracks of a well-recorded session on one of these classic desks and you'll often find less need for EQ and dynamic correction. Because there's no need for technical, surgical-type adjustments from the get go, you get to approach the song or project more creatively. That's a workflow appeal that's hard to quantify.

I should add that, these days, engineers are also increasingly aware of the investment prospect that a vintage console presents. Although they do require a chunky-sized outlay of cash up front, when they're properly serviced or restored, these desks are an extremely satisfying tool for the engineer, producer, and artist to work on — and a solid return on investment over time.

How easy is it to integrate into modern setups?

Provided you have a proper set of converters — and the space — it's not hard at all. We sell dozens of vintage desks a year, ranging from smaller 10- to 12-channel sidecars to larger 24- to 40-input EMIs, Trident A Ranges, and APIs to large-format Neve 8068s and 8078s. We help many clients implement their consoles in a hybrid analog/digital format. For instance, a 12-channel Neve Melbourne or 10-channel Neve BCM10 sidecar will take on a couple of roles. At one phase of the recording, it'll act as a front-end tracking/overdubbing desk, interfacing with your DAW recording/editing system of choice. Later in the process, it will provide the flexibility of a stereo stem mixer with powerful analog EQ, lending classic Neve stereo buss tonality while also furthering the dimension and width of the stereo field. This setup style is really popular.

Beyond that, many users prefer the centralized stereo monitoring functionality of a console, which lets you quickly adjust a queue mix using a set of knobs and high-quality long-throw faders. I don't know anyone who prefers a 100% mouse/keypad/screen workflow to the hands-on, tactile connection you get with real knobs and faders.

Those lucky enough to afford larger 32-40+ input desks can take advantage of a classic tracking/mixing workflow, provided they have a high count of DA converter channels. There's something to be said about hearing it all come together on, say, a '70s API, through a uniform set of pre/EQs — you get that trademark "API sound" throughout the recording. Use a Helios or Neve this way, or a Trident A Range, and you'll be working the way it was done in the '60s and '70s. At that time, engineers, producers, and artists would often choose a studio due to its centerpiece console and trademark sound. As a result, the music/albums they created had a clear and obvious sonic identity. When you were tracking through an EMI TGI desk at Abbey Road, you didn't have all the variety of mixing and matching, and all the crazy amount of brands we have available to us in a session today. The "EMI" sound would shine through, like you hear on some of the last Beatles recordings. Or, think of Led Zeppelin... you think Olympic Studios and Helios. Early Aerosmith, Sly Stone, and Heart? You think of API and those punchy, in-your face recordings with great track separation.

How much fashion is involved with the popularity and therefore how safe/strong is my investment? Why are they so expensive?

As you might guess, the most in-demand analog equipment right now tends to be anything with larger-than-life color and warmth. As we've moved away from tape, there's far less color in digital recordings, spurring the trend to bring back that life and warmth. Two or more decades ago, engineers were constantly looking for cleaner, lower-distortion analog equipment and consoles, since the tape colored the sound so much. In the last ten to fifteen years, as digital recording technology continues to become more accurate and transparent, the fashion has drifted in the opposite direction.

Will warm, punchy, big-sounding desks continue to be fashionable in the future? Our guess is that regardless of what the future holds, it is likely that consoles from "the big 4" — Neve, API, SSL, and Helios — will remain in very high demand and continue to be used in the future. Even rarer, more esoteric consoles, such as those hand-built by EMI, Telefunken, Decca, and a handful of others, have no doubt already transcended "fashion" into the category of timelessness, based on their history alone. I should add that the market for consoles, by and large, is not inflated by "collector value" as we see in certain other markets for items with large consumer appeal, such as vintage cars, guitars, and collectibles. That's not likely to happen. You look at the price of a vintage Neve 8058 and while it may seem quite staggering at first, the reality is that it would cost much more for a company to build a brand-new desk to that quality of build and sound. So, in that respect, if someone is looking for...

Timothy Powell of Metro Mobile Recording has been a music and gear fanatic his whole life. Walking into his main recording truck, M-48, is proof enough of that. I was amazed not only at the collection...

For several years now, the notion of Montreal as a hub of avant- experimental music has grown judiciously in the mindset and record collections of its followers. If you break this down further in the...