The name Jim Scott has graced many excellent albums since he made his debut as first engineer on Sting's The Dream of the Blue Turtles. Artists as varied as the Dixie Chicks, Wilco, John Fogerty, the Rolling Stones, Tom Petty and the Heartbreakers, LA Ladies Choir, Johnny Cash, Audioslave, Danzig, Red Hot Chili Peppers, Foo Fighters, Whiskeytown, Holly Near, Los Lobos, Neal Casal, Lavender Diamond, Natalie Merchant, Robbie Robertson, Tom Jones, Crowded House, Santana and an upcoming album with Sixpence None the Richer have benefited from his tireless production, engineering and mixing skills. 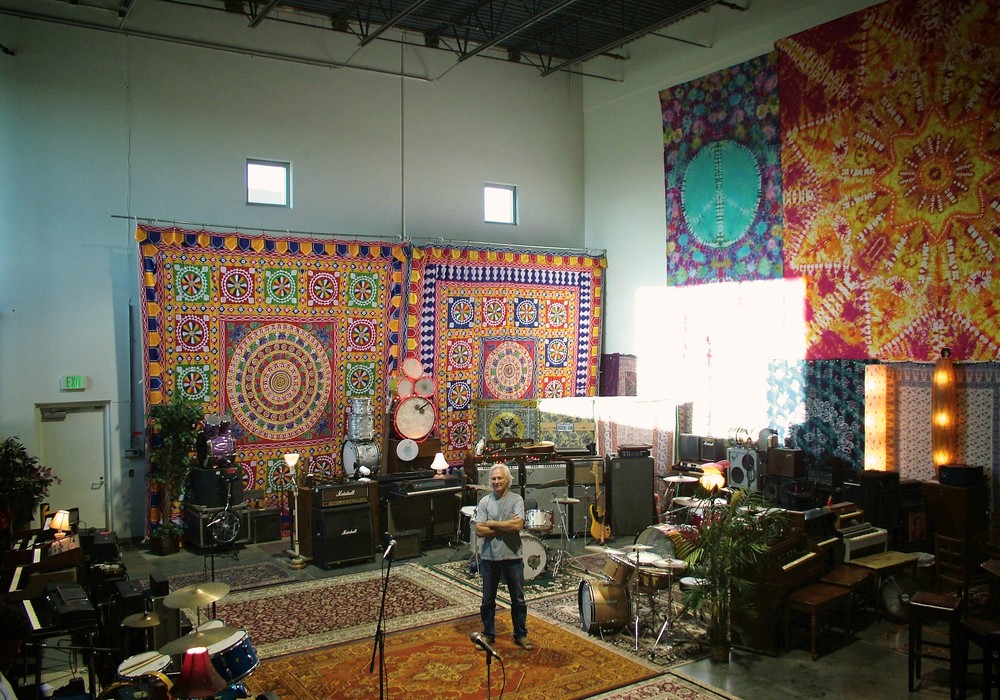 With the music business undergoing so many changes these days, a few years back Jim made the wise move from freelance producer/engineer to studio owner and created himself a place to work. That joint is now known as PLYRZ Studios in Valencia,California — right across the freeway from the Magic Mountain amusement park! Our pal Jason Hiller helped set this interview up, drove us to Jim's and even put us up — it turned out his former band, The Freewheelers, had done an album years ago with Jim Scott engineering and mixing. So we start walking around the giant warehouse (full of amazing instruments) and studio space (with classic Neve 8048 console) Jim has put together...

LC: This place is pretty large.

It started as just an empty warehouse — 5000 square feet. But over the last four years we built what we needed to build, rooms within rooms. We put in proper walls, air conditioning, ventilation and dropped the ceiling. The actual studio area was like a carport inside the warehouse. It had 14-foot ceilings, which got dropped down to 10 feet just to hide all of the ducts and sprinklers. At first it was a big, square room — very live. Initially I did a record in here with King Wilkie, a bluegrass group from back east. It was a live record and it worked out pretty well, even though it was a really ambient, square space. After I finished that record I thought, "I'll have to do better than that." We changed the ceiling and built one iso-booth (for a year or so) and then I built the second booth and got the grand piano. The studio we built is big enough that we can do it live performance style. We can set everybody up with their amps right in front of each other or we can spread everybody out, utilize the booths and closets and get some isolation.

LC: Can you throw things out in the big side room too?

Yeah, we do that — gang vocals and handclaps and the odd trumpet or big guitar solo. It's a big sound. It's also great if you have a lot of people. I've recorded a couple of different choirs up here. It is a warehouse and it can be kind of noisy at times. But if you've got the right kind of attitude you can record whatever you want. We have it wired for headphones and mic lines out there. We can also use the whole upstairs lounge area as an iso booth.

Yeah, well I want the place to look nice, so I covered almost every surface with Indian rugs, tapestries and Christmas lights.

LC: Where do you put amps when you want some isolation?

There is a room underneath the stairs. It's an amp closet. I put the amps in there and I make doghouses out of baffles if you want a little isolation. It's not total, but it's enough — it's old school. You just put a baffle between the amps. I figure if it was good enough for The Beach Boys, it is good enough for me.

LC: What's the name of this studio?

PLYRZ is the name of the studio (pronounced "pliers"). It's also the name of my friends' rock band that rehearses here. We couldn't think of a better name, so we called it the PLYRZ Recording Studio.

JH: Do you mix to tape much?

If I have to do any analog mixing I'll rent a tape recorder. Most artists don't. They can't afford it. I mean, budgets — the only ones lately that have used tape have been Wilco, because they really care and they can hear the difference between tape and Pro Tools. You can't get away with anything around those guys, especially Jeff [Tweedy].

JH: Do you guys stay on tape the whole time with them?

Well, it depends. On Sky Blue Sky it was tape all the way. That's why that record was mixed by hand, because there was no track for time code. They recorded on all 24 tracks. But on the recent record, [Wilco (The Album)] we tracked everything to tape and then transferred it to Pro Tools just because some of the songs were to be more developed. At a certain point we did a shoot out. Jeff likes the sound of tape, but he's not anti-anything. After we did the transfers and worked a little bit, we had a big listening playback and the straight tape sounded a little soft compared to the tape transferred to Pro Tools. Pro Tools and tape transfer just had a little flick that was good.

LC: With the Wilco record, were you involved from the beginning to end on that?

Yeah. I got a co-production credit with the band, which is spectacular. I'm very, very proud...