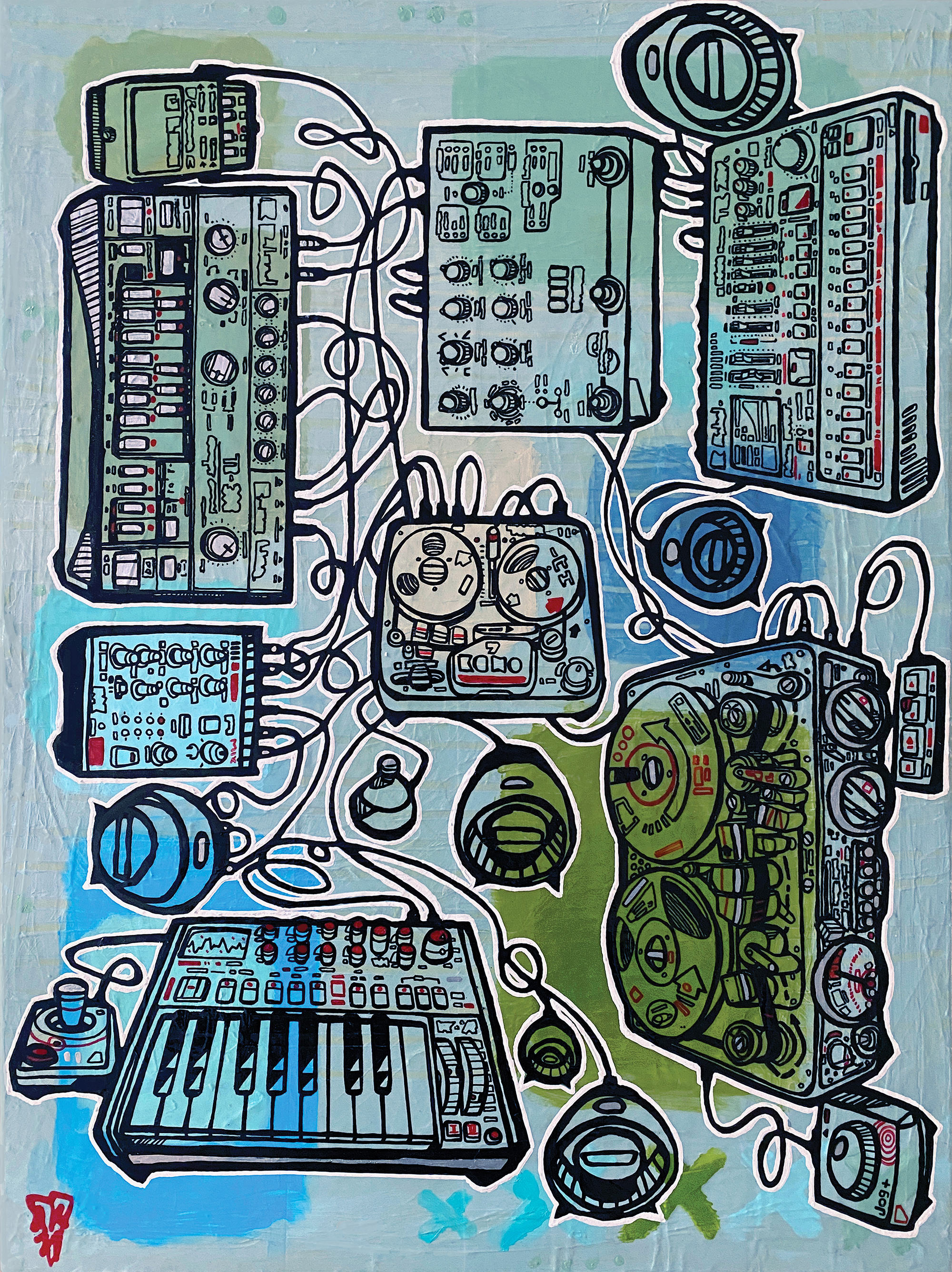 Apogee’s Symphony Desktop was first covered last spring in Tape Op #142. Firmware and software were still in beta testing at the time, so the unit was reviewed based on its primary hardware functionality as a two-channel audio interface. Boasting a pair of Apogee’s flagship-quality converters and mic preamps, Symphony Desktop earned high marks during a recording project described in the review. Symphony Desktop itself is now beyond beta, and this review highlights plug-ins, and other software-related amenities that have expanded following a firmware update in February, 2022.

Experienced Apogee customers will be glad to have the latest update of the Apogee Control 2 application (for Symphony Desktop, Duet 3, and legacy USB products), which is performing well, even on my Mac with OS 10.13.6 High Sierra – one generation behind the recommended baseline of OS 10.14.6 Mojave. The application is analogous to (and supersedes) the Apogee Maestro 2 application. Control 2 allows quick-look control of your Apogee compatible hardware’s I/O, stereo linking, and other valuable features. In addition to setting input levels, users can control a choice of two modeling preamps (or the stock SD-MP), manage print effects, and monitor effects that are either bundled with compatible Apogee hardware or available as add-ons. These plug-ins are accessible directly via Symphony Desktop’s touchscreen. Thanks to Apogee’s DualPath workflow, these tools can be manipulated within your DAW and synchronized back to Control 2 and your hardware. Apogee’s demo videos illustrate Pro Tools compatibility, but I experienced equal success with Apple’s Logic Pro.

The standard Apogee mic preamp emulation is called SD-MP. It offers a clean mic preamp simulation with a wide gain range that parallels the sound and look of Apogee’s Symphony I/O Mk II [Tape Op #140]. The Apogee Alloy AP-66 preamp emulation simulates vintage Class A solid state Neve 1066 circuitry. A Lo-Z switch is tailored for use with low-impedance sources, including ribbon mics. The Apogee Alloy AP-57 is a second mic pre emulation that effectively mimics a modified Ampex 601 tube mic preamp. The Neve and Ampex simulations include output gain control. Gain Link functionality maintains a constant output level when increasing input gain for use when saturating the preamp. The AP-57 is a brighter than the smoother SD-MP. The SD-MP reveals a bit more bottom end than the AP-66 when testing with a standard AKG C414 large diaphragm condenser mic on spoken-word vocals. The AP-57 simulation is also a bit easier to saturate than AP-66. These characteristics can be used to the benefit of your choice of material. When working with the AP-57, Apogee recommends placing a pad in front of condenser mics.

Control 2 also allows software manipulation of effects, including Apogee’s powerful DSP FX plug-ins for use during tracking. The ECS Channel Strip [Tape Op #143] plug-in is a straightforward sound-shaping tool tuned by Bob Clearmountain [#129, #84]. ECS stands for Equalization, Compression, and Saturation. In a video testimonial, Clearmountain described using the EQ, compressor, and drive features to properly characterize and seat a guitar overdub for a recent live project by Ronnie Wood (presumably Mr. Luck-A Tribute to Jimmy Reed: Live at the Royal Albert Hall). The GUI is designed to look like the classic AD-500 Apogee hardware converter that was released in 1991.

The Pultec MEQ-5 and Pultec EQP-1A DSP FX plug-ins were developed in partnership with original Pulse Techniques’ manufacturer Steve Jackson. Clearmountain has revealed that Jackson heard no difference between the original hardware and Apogee’s plug-in models. The original hardware version of the MEQ-5 is coveted by producers, including Jack Douglas [Tape Op #90], for sculpting midrange frequencies with precision, warmth, and body. The EQP-1A plug-in operates at true full bandwidth for use with high-definition digital audio, earning its seal of approval from mastering guru Bob Ludwig [#105] for fidelity across all Pro Tools sampling frequencies. In further testimonial material, Ludwig described his litmus test using the Apogee EQP-1A plug-in to hone bass frequencies as performed on the original hardware with a combination of the boost and dip knobs. On a kick drum track, he demonstrates the CPS to 30 Hz, Boost to +3.5, and Attenuate to +2.5 to produce a “tight, punchy envelope.” Clearmountain describes reliance upon the hardware over his entire career for all manner of instruments, and has revealed one of his trade secrets for mixing snare drums. Set CPS to 100 Hz, its Boost to +3.0, Bandwidth to 10, High Frequency to 5, and its Boost to 10. “You’re welcome,” he adds in an Apogee video clip. Experiments with these settings on tracks by drummer John Blum from a recently completed Ping album project called The Threefinger Opera definitely produced a superior sound that I wish I’d had access to earlier, and intend to tap in the future.

Symphony Desktop’s Opto-3A compressor/limiter plug-in models the original solid-state UREI Teletronix LA-3A [Tape Op #49] electro-optical compressor. Clearmountain cites his preference for the LA-3A’s musical response over the Universal Audio LA-2A [#26] tube-based unit. He offers another tip for transparent, smooth, and lively compression on lead vocal tracks when setting the Opto-3A: “Set the peak reduction knob, so the compressor doesn’t impact the quietest phrase in the part, and then adjust to taste afterward.”

Remaining DSP FX plug-ins include the ModComp visual compressor/limiter with a real-time signal analyzer and the versatile ModEQ six-band parametric equalizer. In your DAW, the Apogee FX Rack plug-ins can run in signal chains of up to six effects with easy recall.

The Native-only Clearmountain Spaces reverb [Tape Op #139] features three-band EQ and an effective de-esser in addition to pre-delay, an intuitive visualizer, and easily-auditioned expert presets to use as jumping-off points. Three of Clearmountain’s favorite reverb sources are customizable and combinable. The Apogee Studio preset provides a short, warm ambience. The Mix This! preset is a medium, bright source modeled on physical spaces at Clearmountain’s L.A. studio. The Roscoe preset is an extra-long reverb modeled after a friend’s physical chamber using AEA ribbon mics.

Apogee’s hybrid DSP technology and DualPath workflow address the challenge of low-latency recording without imposing restrictions. The DSP plug-ins running on the Symphony Desktop are only engaged to provide near-zero latency monitoring on the tracks currently being recorded. The Apogee FX rack that governs the plug-ins runs in both the Control 2 software and your DAW, and the Channel Link feature allows changes made onboard Symphony Desktop or (within Control 2) to be mirrored in the native plug-ins in your DAW for playback. This aids engineers during sessions with big track counts to avoid latency concerns while tracking.

The near-zero latency enabled by the DualPath monitoring workflow is particularly useful when your singer needs tone-shaping during tracking in order to inhabit the mood of a performance. DualPath boasts a seriously impressive latency measurement of 0.35 ms at 96 kHz, even when running Apogee plug-ins. And because these plug-ins also run natively within your DAW, you can use them for playback and mixing even when the Symphony Desktop isn’t connected to the system. The Control 2 application, FX Rack plug-ins, and top-shelf Symphony Desktop hardware are a formidable combination. The unit’s functionality continues to grow and is an ideal point of entry into pristine sound and versatile processing with the convenience of an easily portable interface. DSP plug-ins are included free in the Control 2 update; Native versions available separately.

BABY Audio is quickly developing a reputation for boiling plug-ins down to their essential components and reshaping them into concentrated, powerful production tools. With their newest release, a...

In our world of recording gear, there are plenty of “classics” when one thinks of compressors, mic preamps, or microphones. However, one particular piece of gear that usually isn’t...

Sound Particles is a software company based in Portugal, and is most known for the immersive audio software aptly named Sound Particles 2. Their new plug-in, Density, creates multiple sounds based on...

Live 11 is here, with an abundance of new features and enhancements that distinguish Ableton’s DAW and production environment as indispensably unique, even as it deploys elements such as take...

If you find yourself chasing modern low end, you’ll eventually end up playing with a subharmonic synthesizer. There are plenty of options, ranging from outboard gear like the dbx 120A...

Space. The final frontier. Is it? So, what is space as it relates to music? Space is that last audible cue that gives listeners a sense of location. Near, far, big room, small room, no room, etc. It...