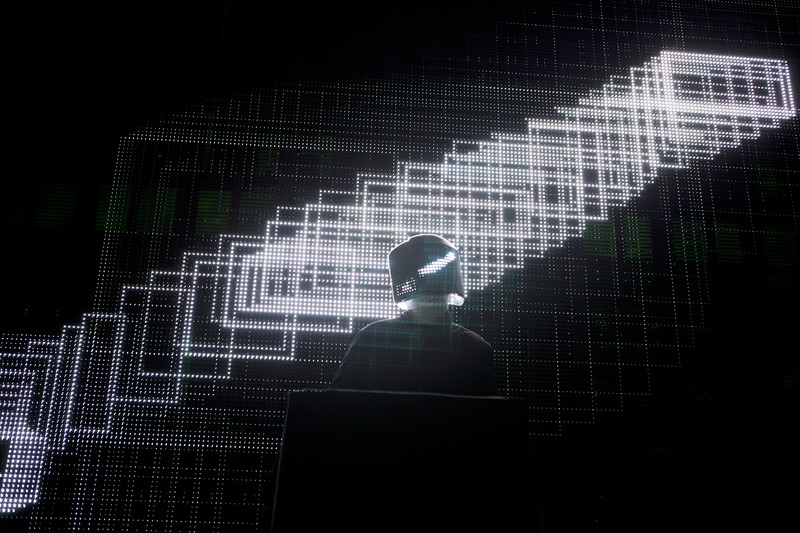 Tape Op issue #89 features a rare interview with Tom Jenkinson, a man known to the world as Squarepusher. Below is an "introduction" of sorts for someone that might be new to the music this man has created over the last 15 years.

I've been lobbying for years for the enigmatic British IDM genius to grant Tape Op an interview as a rare lens into his bafflingly technical creative process, and it finally happened when he decided to swing through New York in March for his first U.S. show in at least as long as I've been watching his career. This was an extremely intimidating undertaking, as Tom Jenkinson composes his tracks from deep below the surface of his DAW, diving deep into fundamental DSP via audio programming platforms like Reaktor in order to build his own tools before he gets to use them. One has to assume that he doesn't actually get to discuss this stuff with other people too often, but because his approach is so carefully considered philosophically, he nonetheless made for a fascinating interview, even for folks who don't instinctively know how to make an LFO do anything useful. This guy is a magician, but for some reason only a legend in very specific circles. So, for the rest of you: we are really excited about this, and in the hopes that you'll jump on board with our enthusiasm, here's a quick introduction to help you prep yourself.

Let's start strong -- all these years later, 1997's Hard Normal Daddy is still widely considered his defining record. "Beep Street" is far and away my personal favorite track from the record, and quite possibly even his entire catalog. It's hard to believe that the drums here came from a box; the programming is otherworldly and milks every drop of emotion from the velocity accents. I like to imagine that this particular drum machine might have been less like a Roland and more of a pair of robotic arms holding real drumsticks banging away on a real snare, much like the infamous Yellow Drum Machine. (Unfortunately I have no idea what it actually was, because I forgot to ask him. Oops!)

If you ask me, the copious amounts of love showered on Hard Normal Daddy come at the direct expense of the equally wonderful Hello Everything, which was my first Squarepusher experience in 2006 and is a fantastic if foreboding showcase for the maturity his programming skill assumed during the intervening decade. Lead single "Hello Meow," presented here as part of a live performance at the London club Koko, is pretty much a circus act of frivolous synth patterns until Tom's formidable bass skills up the dramatic flair in the second act.

It's easy to overlook "Iambic 9 Poetry" because it's one of the most serene things he's ever recorded. Don't. In a drastic departure from the usual tightly-wound drum loops and stuttering edits, he builds a quiet little moment of introspection from bass harmonics and live percussion that sounds like one of his breakbeats is drifting off into naptime.

Tom points to "Tetra-Sync," a live track included on 2004's Ultravisitor, as some of his heaviest DSP work; my MacBook looks like it's about to barf up a kernel panic over here at the mere thought. The surprising thing, though, is that the song still doesn't feel all that foreign, largely because the screwball sounds periodically take detours into more familiar chord sequences, and all of it is accompanied by basslines played on a non-theoretical instrument that actually has strings.

"Port Rhombus" -- a gorgeous study in contrasting goopy sustain and slow releases in the keys with blazing machine gun 16th-note runs everywhere else.

It may not be the easiest thing in the world to listen to, but the payoff at the end of "Plotinus" is worth it -- first, seven minutes of careful audio collage to construct those weird little alien melodies, just enough time to make them feel familiar but not quite comfortable. Then he just turns around and rips it all to shreds with a buzzsaw.

This BBC interview segment was enthusiastically received upon its release in 2006, mostly because it opens with Andre 3000 gushing and suggesting a collaboration. Jump to the end for a bit more of the same from Thom Yorke; then, most importantly, Squarepusher plays them out over the credits, totally unaccompanied, in a showing that handily destroys even his own 2009 album of pieces for solo electric bass.

No matter how much other stuff there is to get excited about, I suppose I probably won't get away without at least one reference to Ufabulum, the new record he just released in April which was likely the reason our interview finally worked out. Across the board, it's quite a compelling refinement of the oddly playful new sounds which he first began exploring on 2008's Just A Souvenir and its companion EP Numbers Lucent, and "Dark Steering" is the standout precisely because it flips them into something ominous enough to sit comfortably next to "Hello Everything."