Hillary first came to Tape Op's attention when she e-mailed us, from New York, with some hot "snapple-micing" tips (see the letters in issue #3).  I was impressed with her rockin' producer/engineer rÈsumÈ which included the Ramones, the Godrays, Murphy's Law, Tribe 8, L.E.S. Stitches, Spook Engine, and more.  We managed to meet up face-to-face for an interview at the palatial Tape Op digs while she was in Portland visiting for the holidays.

So how did you get started in recording?  Were you in a band?

I've never played music.  I've always just listened to music.  When I was in grade school I wanted to take up trombone lessons and the teacher said, "Your arms aren't long enough."  I know now that it's more like, "Your a girl, you can't do that."  I was kinda discouraged.  I just loved music and when I was in college I was studying communications and I took a sound production class, like razor editing and that kinda stuff, and I read chapter one of the book about what a producer is and I thought, "This is what I want to do."

Did you study all that stuff at school?

Not in college.  I got a degree which was more production orientated and I did a lot of video.  After I graduated college I took a short 8 week basic course on the theory of recording.  It wasn't even that technical.  It was more like there are these steps in recording and this is how it's done.  I was living in Maryland and I got a chance to run a studio in New York, turn it into a business, and learn engineering at the same time.  I just jumped at it 'cause I wasn't doing anything exciting in Maryland.

How did you end up with the chance to do this?

Friends of mine had recorded at the studio [Spa], where I'm working now, and the guy who was the assistant engineer at the time ended up clicking with the band and they needed a soundman--so they took him.  The studio owner, who was friends with the band's manager, said, "If you take him you need to give me somebody."  The manager knew that I wanted to get into recording and said, "Well, go up for six weeks."  It ended up being more than six weeks.

How long have you been there now?

Three and a half years.  After I was there for six months I started engineering--just small bands.  The studio is a small 24 track; a midsize studio for Manhattan.  It's pretty much a word-of-mouth kind of place.  I was doing real assisting--answering phones, making coffee, emptying the trash and also setting up mics; all the stuff an assistant does

At the same time I was running the studio: learning about where to buy equipment, if something breaks--who to call.

So they gradually eased you in to recording.

It was just me and the owner and one engineer but he wasn't involved in the business aspect.  I pretty much taught myself all the aspects of the business of recording.

What was the first session you recorded?

A lot of the times there's a crossover, when you're still assisting, of when you're assisting and when you're actually engineering.  "You want me to get the sound?  I'm just the assistant."  It might have actually been D-Generation.  They just came in to do one song for a demo.  They're a big, New York based rock band.  They opened for Kiss!  I pretty much just started engineering--not really working with a separate producer but working with the band, just giving them suggestions--not even really co-producing.  I just worked with a lot of New York local bands that I liked.  "Come in and record.  I'll get you a good rate on the studio and I'll do it for free."

You were coaxing people that you knew or had seen.

A lot of the bands hadn't recorded before; or if they had it was just 4 track stuff.  I thought, "This will be great for them.  They'd be able to learn what all these other bands are doing out there."  It was a way for me to get more experience doing it.  We'd go in, off-hours, late at night or in between two lockout sessions or something.

Yeah, the Spook Engine record was done on that.  An experiment on how to make 8 tracks work.  A couple of songs... 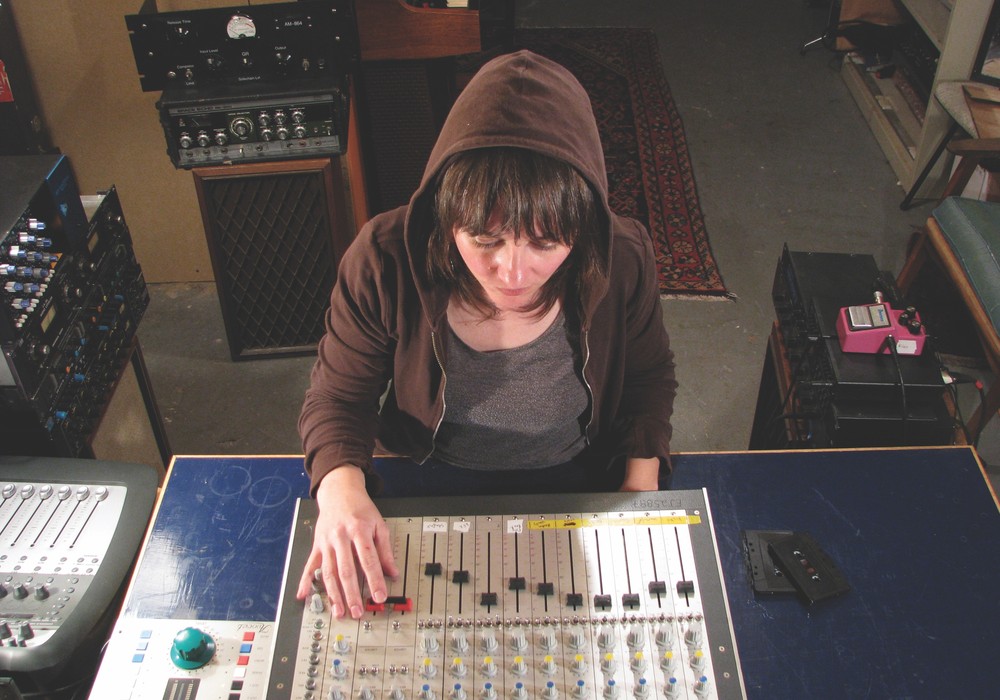